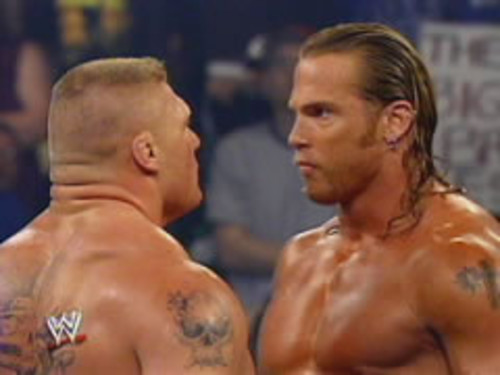 Test vs. Brock Lesnar- King Of the Ring Semi-Final

It is 1:00 AM on a Sunday night. I have already told our PTBN fearless leader, Brad, that I won’t be doing a pre-viewing due to a lack of time this weekend. My weekend was pretty busy. Traveling on the road leads to one thing upon my return home, a honey-do list. Looking over the match listings for King of the Ring 2002, I got a consistent feeling of blah. I don’t know what it is about this card and the matches composed of it. There is interesting stuff on it like Hogan/Angle, Eddy/Flair, and even HHH/Taker in their last match versus each other until WrestleMania 27. Yet, nothing suited my fancy and in a quick bind I made a strange choice.

I went with the hoss matchup between Test and Brock Lesnar. I never liked Test at all. In fact, I pretty much detested him and he was given change the channel treatment for numerous years. Part of that is probably the result of where I was as a “fan” during his run. By this point in 2002, I was watching Red and Low-Ki have one of the best opening minutes in wrestling match history at the 6/22/02 Road to the Title ROH show. I even was beginning to hear through the grapevine that these two mid-west guys named Chris Hero and CM Punk were doing some impressive stuff in front of Kentucky hillbillies. Test personified the old guard in what a superstar was supposed to look like. Muscled out of his mind with long hair, he was the typical jock that bullied the likes of Red and American Dragon. This resentment is what caused me to turn my back on WWE programming for the better part of the next two years. I was committed to seeing these indy guys do their thing and not be restricted by the machine that was the WWE.

Speaking of machines, Brock was destined for stardom by this point. He had run through his feud with the Hardy Boyz and was looking to spread his wings into bigger things. Winning the King of the Ring title had been used to catapult guys before, but it had varying degrees of success in its history. Bret Hart was a made man already when he won. Owen Hart’s win in 1994 was his last vestige of victory in a feud he was destined to lose. We all can call the Mabel decision in 1995 a bomb job. Even Stone Cold winning the crown in 1996 and preaching his infamous sermon looked better in retrospect than the plans WWF had for him at the time of his coronation. Lately, the crown had been used better to jump start careers. HHH was climbing up the WWF ladder, but the KOtR victory in 1997 helped give him credibility when he became HBK’s #2 man. Ken Shamrock was a lateral KOtR holder. Billy Gunn bombed hard. Kurt Angle definitely put his victory to good use as he headlined a hot program in the summer of 2000. Edge’s win the previous year felt much like Shamrock’s in that not much happened in the short term after the win. Sure, he won the IC title but that had been devalued so much by that time that it just felt like another short term carry-over event.

All of this backstory leads us to Lesnar. This night was destined to have him mentioned in the same breath as the legends of wrestling all around him like Hogan, Flair, HHH, and Taker. Heyman gives him a great speech before the match begins and they are already licking their chops at facing an injured RVD in the finals. Test has other plans however, and this feels like his last shot at relevance.

Brock certainly HAS the look coming out. His physique is amazing with a neck that doesn’t end and his athleticism is on display jumping up to the apron and hopping over the ring ropes like Rey Mysterio. Him and Test lock into a good staredown and I was pumped for this one to begin. Brock starts off strong dominating Test into the corner and nailing him with shoulder blocks. Test to his credit fires back and he hits a flurry of offense leading to a big boot sending Brock to the outside. Heyman offers some guidance and already we have seen Brock take more damage than we were used to. Test continues the onslaught bullying Lesnar down in the corner. It is a shame the crowd doesn’t get behind him for this because it was a great spot and showed how he was not backing down from the fight.

Lesnar now knows what he is up against and he is up to the challenge, taking over and delivering a succession of elbows. A big irish whip into the corner and another punch has Test on the mat and Brock smirking once again. Test comes back again though, showing Brock can’t get overconfident. Brock delivers a back suplex then pounds on Test in a most prickish fashion. A backbreaker by Brock has him once again firmly in control and strutting.

Playing true to the narrative so far, this gives Test an opening to come back. He punches away but once again Brock is too young and strong and he hits a powerslam. We get our weakest moment of the match so far as both competitors seem to aimlessly punch at each other due to some miscommunication. The result of this is a Test sidewalk slam and Brock is looking a bit wounded now. This match feels like one that should have a health status bar above the two competitors. Test has taken some substantial damage on his back but like playing a game of Street Fighter, seeing Lesnar’s health slowly creep down gives you some hope. Test follows Lesnar in with a clothesline and finally the crowd is starting to get behind Test. A full nelson slam gets a nearfall and this is by far the worse Lesnar has looked. Brock blocks the first pumphandle slam attempt but Test hits the move a second later for a great nearfall that was built to beautifully. JR and Lawler are great on commentary getting over this match. Test blocks a powerbomb attempt and nearly kicks Lesnar’s face off with a big boot that the crowd goes nuts for. Test is waiting for Brock to get up and we get some interference from Heyman. It was enough for Brock to immediately hit the F-5 and escape with a win.

This match took me by surprise and blew me away. It did a fantastic job of building up Test as a strong big man while showing Brock’s resilience and overall potential. He wasn’t a monster that would run through everyone, but even if he didn’t have an answer for everything Test could do, he still was someone that had his crafty manager in his back pocket. Brock capitalized on every opening and truly looked poised to become the next big thing after this match.