Scott: Place to Be Nation, welcome to the newest edition of the endless fun and games known as “Inside the Legends’ House.” We continue our journey in Palm Springs with an eclectic mix of Hall of Famers and WWE Legends. So far we have seen some high (and low) brow entertainment, and except for a couple of minor skirmishes, no heavy drama. Somebody had that nickname once… hmmm. Anyway, let me introduce my partner riding shotgun on this ride, Mr. Dan McGinn!

Dan: Thanks Scott! I love how we time the writing of these things immediately following a Bruins victory. It’s uncanny our luck. Not only do we we enter this in such high spirits, but I also consume many spirits of a different kind that translates into recap gold. I come to you today from an alternate location where I am sitting for a couple of hell hounds who greeted me kindly with a kick to the cherries upon my return. Hopefully I can complete this piece without vomiting. The odds are stacked against me as the teaser photo for this episode is of a shirtless Pat Patterson. I better turn things over to you as Episode 4 is upon us!

Scott: It is true that we start these recaps when you’re as tanked as Mean Gene and Pat. We open with last week’s recap where the guys had the commercial shoot competition and Piper’s team got a limo to Las Vegas whereas Mean Gene’s team had to take one of those church buses. When we left last week, Piper’s limo had just gotten pulled over. Honestly, the other guys are in a van. Get the hell over it! It’s a trip to Sin City! Who cares how you get there? Is it legit? For flamingos hanging outside the window?

Dan: Piper rips Fink for not sweet talking the cop into letting the poor limo driver go with just a warning. Meanwhile, Tony rips something of a different kind as it appears he has a problem with cutting ass so to speak in the limo. As if this guy didn’t have enough heat on him already, now he is stinking up the luxurious automobile. Roddy continues to be one of my favorites as he jokes about how he always gets arrested in Vegas. Pretty coincidental that he was in the vehicle that got pulled over. A hottie not named Ashley approaches our guys and tells them that they are going to perform in a Vegas show that very evening. Oh Christ, now I know why Pat was half naked earlier. It’s a Chippendale’s show. Oh I’m going to be sick!

Scott: This was put together for just one reason: To give us serious Pat Patterson jokes. Piper is clearly uncomfortable with this, as this is obviously not 1985 and none of these guys are in the best of shape. We really have to see the Fink without a shirt on? So the guys are going to get “manscaped” at a boutique. Fink dresses like he just robbed a bank and he’s getting spray-tanned. We’ve already had fart jokes, now we’re going to have manscaping? Poor Hillbilly Jim is getting ripped to shreds by the waxing lady. He probably never thought when Hulk Hogan bought his black boots in 1984 that Hillbilly Jim was going to lose all his hair. Poor bastard.

Dan: Scott, if I ever get “manscaped,” I want Jimmy Hart to do the play-by-play. That segment with him and Hillbilly had me legitimately laughing out loud. This is definitely not the episode to watch on a full stomach. I think I would be more like the Hot Rod if this ever happened to me. Lots of curse words and screaming. Still loving the Duggan/Piper connection. I wish they worked more together in the late 80’s. What awesome chemistry they have in 2014. These ladies are definitely having way too much fun spray tanning and waxing these old timers. I can’t believe this is how I’m spending my evening. “Write for the website” they said. “It’ll be tremendous for your career” they said!

Scott: Hey everybody pays their dues. You know who I’ve had on the podcast in those early shows. Yeah I thought so! Anyway, the tanned and waxed guys are now getting their practice for the big show tonight. Tony is probably the only one still in shape, although Hillbilly still looks pretty good. I agree with Mean Gene’s assessment of Jimmy “No ass and beer gut” Hart. Duggan says women usually throw obscenities at him and not money. Hell I’ve been throwing obscenities at Duggan my whole life, although I’m sticking up for him in this. He finally throws down with Tony who “bumps” into him. Tony is almost wanting to pick a fight with Duggan, as Tony admits he never liked him. Sorry Dan, but the crazy Atlas is all yours.

Dan: Wow, Duggan went through the whole range of emotions there. He was cool as a cucumber and then went all Total Divas on us there for a second. I wonder what happened between them 20 years ago. Piper seems to be coming around on this challenge which is awesome since he was getting all Gary Busey on us earlier. The show begins and everyone is all geeked about this performance. I hope my body looks better than Gene’s when I’m his age. Bless the hearts of those frisky ladies in the audience who hung on every middle-aged movement from our legends. Scott, you really are trying to give Duggan the benefit of the doubt with this project. He has been awesome on this show and I challenge anyone to debate me that fact. I am amazed how well this Chippendales show went over. I completely expected this to be a dud. I stand corrected! 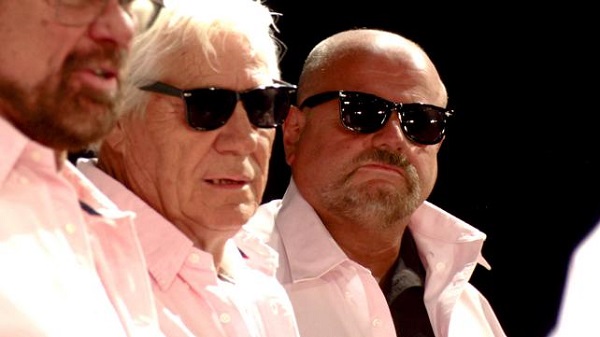 Scott: This is definitely the episode of the show so far. Back in Palm Springs, the tension between Tony and Hacksaw keeps rising. I agree with Duggan that Tony (who clearly hates Duggan more than the other way around) wants to slug him but Duggan is taking the high road and not instigating it. Maybe Duggan ripped the Saba Simba gimmick choice? Tony would then have to bump every wrestling fan in the world if that’s the case. Piper’s trying to simplify the whole situation with Tony. Tony’s just not a bright guy and Piper makes the great point that Tony’s used to getting attention and here he’s just one of the guys. I definitely agree with Mean Gene that is seems Tony has a chip on his shoulder with the world. He probably feels he was wronged in the wrestling business and he’s taking it out on everybody. Piper tried to do something to quell it but I think those guys may need to just throw down. With that, our episode ends. I am very curious as to how this works out. Duggan (I can’t believe I’m saying this) may be my favorite guy in this house. He’s having fun and taking every task or situation in stride. Dan, take us home!

Dan: Remember when I joked about a PTBN Legends’ House in one of our earlier pieces? I wonder who the Tony/Duggan feud would be under that roof. My guess is Chad Campbell in the Tony role and I would be Hacksaw. I think Chad still thinks I “screwed” him during PTB Episode #300 and maybe I did but that’s besides the point. Inside jokes aside, there will be a throwdown and I love how it keeps building up to that point with each episode. Terrific slow burn booking here and creative has to be praised for that. Now with that said, I hope these meat heads patch things up in a hurry. Solid show with plenty hilarious moments and one-liners. If you aren’t watching this show by now, you may be the only one because it constantly ranks in the Top 10 Network charts. In closing, I hope the image of Hillbilly’s chest being waxed and Howard Finkel getting a spray tan in his briefs haunts your dreams until we meet again. Thank you for joining us Inside the Legends House.