In possibly the most stacked year in UFC history, and as the UFC looks towards celebrating its 20th anniversary next month, UFC 166 will quite possibly go down as the greatest top to bottom night of them all – two of the greatest heavyweights ever concluded their trilogy, two lightweights went to war, and five debutants had nights to remember.

In the main event, Cain Velasquez dominated Junior Dos Santos in their third meeting en route to a TKO victory in the fifth round to once and for all establish himself as the undisputed greatest heavyweight fighter in the world today. In what was in a lot of ways a repeat of their second fight, Velasquez dominated on the ground and in the clinch to suffocate the offence of Dos Santos, though the Brazilian proved to be more than a threat on the feet when Velasquez opted to stand and trade. Over nearly twenty-five minutes the champion used his superior cardio and his relentless attacks to dominate all five rounds, and by the end Dos Santos was exhausted and drained. In the first half of the fight the short punches and knees from the champion in the clinch proved to be the difference, and Velasquez’s variety of attack was truly remarkable. In the second round the two traded in some very brief exchanges that left both looking worse for wear, but once back in the clinch and against the cage Dos Santos could do little against the relentlessness of the champion, absorbing over 120 significant strikes before succumbing in the final round. It could well have been over in the third as referee Herb Dean looked to step in and touch the pair when Dos Santos covered up on the ground after being knocked down twice, and some including UFC president Dana White thought it could well have been stopped at that point. Perhaps the only significant difference from the second fight was the diminished importance of the takedowns from the champion, with Velasquez succeeding with just two takedowns in eleven attempts, compared to eleven in 33 at UFC 155. By the fifth round Dos Santos was exhausted and was dropping his hands more and more, taking more punishment outside of the clinch as the fight went on. In the fourth round Dos Santos was cut badly and that seemed to really affect his vision as the round went on, before the finish finally came with just under two minutes remaining in the fight. Dos Santos slumped to the ground and couldn’t get back to his feet, and the fight was stopped before Velasquez could land a ground strike. A truly incredible performance from the champion that will give pause for thought to any fighter in the heavyweight division – including Fabricio Werdum, who Dana White confirmed would be the next opponent for Velasquez in 2014. As for Dos Santos, he is now firmly second best in the top two heavyweights in the UFC right now. Likely a fight with the winner of Overeem/Mir or Barnett/Browne beckons, as Dos Santos looks to climb the heavyweight ladder once again. 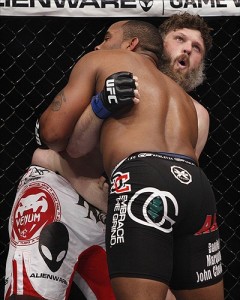 Velasquez’s cornerman and training partner Daniel Cormier also put on a dominant performance to take a 30-27 unanimous decision against Roy Nelson in his last fight before moving down to light heavyweight. Noticeably slimmer and weighing in ten pounds lighter than in his UFC debut in April, Cormier showed renewed speed and intensity without losing any of his well-documented strength and wrestling prowess. Cormier dominated with his wrestling in the first round, barely letting go of Nelson for a second and suffocating the distance striking game until allowing Nelson to take some shots at him in the final minute. Cormier was able to use feints and great head movement to avoid the heavy hands in the second round, while still trying to close the distance and not allow Nelson time to pause. Cormier looked very fresh even deep into the third round while the longer the fight went and the more Cormier hurried him, the more Nelson was worn out. Nelson’s position in the top ten of the UFC’s heavyweight division must now be in jeopardy, with the only man below him being Stipe Miocic who defeated Big Country at UFC 161. Cormier on the other hand put in a commanding performance and executed his gameplan to perfection, and that will make many in the light heavyweight division take notice. While an immediate title shot seems unlikely, many have suggested a title eliminator fight with Alexander Gustafsson would be a good option for the former Olympic wrestler.

Gilbert Melendez and Diego Sanchez lived up to their promise of being a very exciting fight, even if it was one sided. Melendez took a unanimous decision from the original Ultimate Fighter winner after a brutal and bloody affair that seemed to answer the question once and for all of just how much caution one man can throw to the wind. Sanchez fights single mindedly to hurt his opponent, walking through punch after punch just to land one of his own, which admittedly makes for entertaining exchanges. However this fight has taken on something of a life of its own in the immediate aftermath, with Joe Rogan proclaiming this “the greatest fight he has ever seen”. It was entertaining, but it was incredibly one sided. It was not the close  near unscoreable contest we saw just weeks ago between Jon Jones and Alex Gustafsson for example. The rest of the main card delivered in the excitement stakes, with Shawn Jordan and Gabriel Gonzaga delivering the finish that they looked so able to deliver. With 42 wins between them going in and just one of those by decision no one truly expected the judges to have a say in this one, and that prediction came true when Gonzaga ran through Jordan in just ninety seconds on his way to a TKO victory. John Dodson achieved the same outcome in his fight with debutant Darrel Montague inside the first round – a fight with John Lineker (should he overcome Phil Harris next weekend) would likely set up  a new number one contender for Demetrious Johnson and the flyweight title. 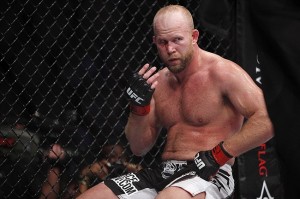 The undercard too delivered in excitement, not least in Hector Lombard destroying Nate Marquardt in Lombard’s debut at welterweight. Some had speculated the cut down to 170 pounds would be difficult for Lombard, but after he came in one pound under the limit that suggestion was somewhat nullified. Within two minutes Hector Lombard showed the killer instinct and unstoppable power that made him so formidable in Bellator and made him so desirable for the UFC, and perhaps now those two mediocre performances at middleweight will be forgotten about? Jessica Eye took a razor-thin decision over Sarah Kaufman in both women’s UFC debut, and despite some questionable judging of the third round both women looked impressive. Kaufman was a stern test for the less experienced Eye, but she looked more than a match for her despite fighting at a new, higher weight class. Bantamweight may well actually be a more comfortable home for Eye as she looks stronger than she did at 125 pounds. The questionable judging was in full effect as Tim Boetsch defeated CB Dolloway despite two eye pokes that led to Dolloway having a point deducted. Boetsch was decidedly second best in round one, and really only looked like a winner in the third round. This should have led to a 28-28 draw, however two judges managed to give all three rounds to Boetsch while the other gave all three to Dolloway. Still, this was an impressive performance against a top ten opponent for Dolloway, while Boetsch solidified his place in the middle of the rankings as a strong test for any aspiring top contender. In the opening prelim card fight, KJ Noons got the best of George Sotiropoulos over three rounds taking a unanimous decision from the Aussie. Noons was desperate for a win after a disappointing debut at UFC 160 in May, while Sotiropoulos slumps to his fourth loss in a row.

The Facebook card was over almost as soon as it had begun, with all four ending within two rounds or less. Kyoji Horiguchi, a natural flyweight, finished Dustin Pague at bantamweight as Pague drops his fourth loss in a row. After some terrible luck with judges and short notice fights, Pague is likely done with the UFC. Adlan Amagov and Andre Fili also looked impressive in their debuts against TJ Waldburger and Jeremy Larsen respectively, with Fili having taken the fight on twelve days notice. Fili was preparing for a fight at welterweight and had to cut a scary amount of weight to make it down to 145. Tony Ferguson took the only submission of the night against Mike Rio to earn himself an extra $60,000 bonus for SOTN.