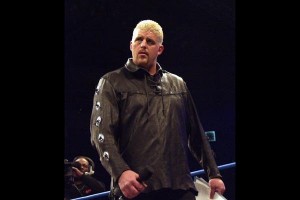 He’s currently one of the best in the world, but how did he get there?

Welcome to the second issue of “The Wrestler Snapshot” I decided to continue with the Rhodes family (check out Dusty’s Snapshot) and focus on one of my favourite wrestlers of all-time, Dustin Rhodes. How does somebody follow in the footsteps of one of the biggest stars in wrestling history? Let’s take a look.

A little before Dustin Rhodes made his debut, alongside his father, in the WWF in 1990 he was testing the waters in smaller promotions. One of those places was Jerry Lawler’s Memphis. In our first match he takes on Black Bart, who was mostly known in the south. It is for the CWA title, which was the secondary belt at the time in Memphis.

This is a real interesting look at Dustin as a rookie. He is wearing the same outfit as Dusty and is copying some of his mannerisms and even the bionic elbow. Dustin really shines in the beginning using some nice dropkicks and showing off how he differs from Dusty with his speed. His selling is great even at the beginning of his career.

After Dustin’s shine segment, Black Bart rough houses Dustin. The biggest spot of the match sees Bart throw Dustin over the announce table. After quite a beat down, Dustin tries a comeback with his bulldog, only to be shoved into the referee. From here is a pretty clever finish. Bart tries to use his branding iron, Dustin grabs it. As the referee takes it away, Bart uses the powder to the eyes for the win. Not a great match, but solid and it shows where Dustin was in his career. A faster and less charismatic version of his dad.

Jump ahead 5 years and things have changed. Dustin had that brief stint in the WWF and then moved onto WCW. With Dusty retired Dustin started to develop on his own, Dustin became known as “The Natural” due to how naturally good he was in the ring. He became a tag team champion with both Barry Windham and Ricky Steamboat. He also became the World Six-Man Tag Team Champion with Big Josh (Doink) and Tom Zenk. He then became the United States Champion, twice. Here he is in a top contenders match with Big Van Vader.

Something weird to consider is that Dustin is actually taller than Vader. Watching the match you feel as if this is a monster attacking a smaller man. This shows off how great Dustin is at making himself look smaller than he is. The dude is 6’6″, but he never comes across as a big wrestler.

The match starts off with Vader dominating Dustin and pushing him into the corner, until he makes a mistake. Vader spits on Dustin and that unleashes Dustin to beat the crap out of Vader. He takes him down, unloads with punches and slaps, and then rips off his mask. Dustin unleashes his inner Paul Orndorff at the beginning here. The crowd loves it and it’s really a great moment to see Vader get his.

Of course Vader makes a comeback with a Vader Attack as Dustin is coming at him. He goes back to the beginning of the match and killing Dustin in the corner. Dustin does an amazing 360 degree flip sell of a lariat that looks great. It’s one thing when Marty Jannetty does that flip, but a man of Dustin’s size doing it is quite awesome. The next Vader Attack is countered with Dustin’s powerslam. In a neat sequence Dustin goes for a sunset flip, Vader tries to counter with a splash which Dustin moves out-of-the-way of and then hits a lariat on Vader who is seated. I don’t think I’ve ever seen that before.

At this point Dustin goes for his bulldog finisher, however Vader counters by throwing him over the top rope to the floor in a massive spot. Vader hits the Vader Bomb, and Dustin gets his foot on the ropes for two. He hits a second Vader Bomb which only gets a two count. They are really making Dustin look great here. The smashing in the corner continues here and Vader goes to the second rope to attempt a Vader Attack, which is turned into a slam.

Vader pushes Dustin into the corner again for more smashing, but Dustin unleashes the bionic elbow. He goes nuts with punches and elbows and lariats, but can’t take Vader off his feet. Finally a flying lariat does it and he gets a two count. Dustin then attempts a superplex which he turns into a DDT for two. Insane. He then hits the bulldog, and Harley gets on the apron, however Dustin nails him. Vader hits the Vader Attack on both men and then nails Dustin with an inverted power bomb for the win.

What can you say about this match? It’s a real epic slug fest with the smaller Dustin trying to outfight the monster. Dustin is massively over at this point in time and you can see that if Hogan did not come him, the company probably would had been built upon him and Steve Austin.

Dustin continued on in WCW for a few more months, but was fired in March 1995 for blading on pay-per-view. From there he went to the WWF and debuted in September of 1995. He did not show up as “The Natural” we had learned to love, but as a brand new character called Goldust. Goldust, nicknamed “The Bizarre One” was a man dressed like the Oscar award who was obsessed with movies. He was also either gay or pretending to be to play mind games with his opponents. Goldust was so ahead of the times and drew so much heat, they had to tone it down after a few months and even give him a female valet (his wife Terri as Marlena). This is after he has been the I-C Champion and now it’s been tied up after a match with Savio Vega, the week prior. Here is the rematch to determine the true I-C Champ.

This match is very basic. Savio Vega shines in the beginning. The middle is all Goldust working over the knee. The ending has Savio’s come back and almost win, however Marlena gets on the apron and distracts the referee leading to a roll up pin for Savio, however the referee doesn’t see it. Steve Austin (who had come to ringside earlier) hits Savio with the Million Dollar Title giving Goldust the win.

Dustin playing the Goldust character is a little jarring after him as the natural babyface. His strength is selling and as a heel he has to be the one dishing out the punishment, so it takes something away. However, his taunts and the spot in the corner where he is doing the ten punches and ends it with a kiss are really awesome here.

Goldust stays around in the WWF and turns babyface in 1997. He becomes Dustin Runnels again and then Goldust again, but even more bizarre. In 1999 he returns to WCW and has a nice little run and even tags with Dusty again. He makes his return to the WWF in January of 2002 in the Royal Rumble. He eventually formed a tag team with Booker T.

One thing that I haven’t talked about is that Dustin Rhodes is an all-time great tag team wrestler. He had awesome runs tagging with Ricky Steamboat, Barry Windham and Booker T. Currently you can see how great he is teaming with his brother Cody.

This match here is for the World Tag Team Titles.

What makes this match is Goldust’s extended face in peril segment. There are two hope tags that get cut off. During one of them  he crawls to try to tag Booker and as he is crawling he is slapping the mat in rhythem getting the crowd to clap along with him. Just a brilliant wrestler. His selling is superb. Early on he uses the butt bump too, which is one of my favourite moves. He is so much better as a babyface it is not even funny.

After the hot tag Booker runs wild until Jericho cuts him off. Dustin comes in off a blind tag and bulldogs both Jericho and Chrstian and then sets up Christian in the corner for Shattered Dreams as Jericho is inadvertently distracting the referee. As if Christian’s nuts did not see enough, Jericho gets drop toe holed into them. A really hot sequence.

Jericho gets the upper hand again, but Booker makes the save. Axe Kick, flying dropkick and Spinarooni by Booker. At this point Christian tries to nail Booker with the title belt and Jericho goes for a sprinbboard dropkick only for the ropes to break. Booker is thrown to the outside. Jericho bulldogs Goldust onto the title belt and then hits a moonsault for the win.

After a few runs in TNA and tours around the world and the indies, Goldust returned to the WWE in 2008. He mostly stayed out of the spotlight and was featured on ECW and the B-shows. Here is one of those B-Show matches from Superstars against the great William Regal.

This match asks the question “how great can a five minute match be?”. The answer is, pretty damn great. These are two masters in the ring for this one. After a short stint going after Regal’s arm with some neat attacks and submissions you don’t normally see, Regal comes right back and does the same to Goldust. You’d think Goldust’s arm was actually sprained, his selling was so great here. After some vicious attacks and great selling, a kick to the head draws blood on Goldust behind the ear.

This was during the time where the referee would put on the gloves and deal with the blood, thus stopping the match. After a brief stopage the match continues on and picks up exactly where it left off. Dustin gets his comeback (while still selling the arm) and hits his amazing powerslam. He hits his bulldog and goes for the Curtain Call, only for Regal to fight out and hit an Exploder suplex. He goes for his big knee finisher, Dustin ducks and its the Final Cut for the win. This may had been the best five minute match I have ever seen.

Dustin has disappeared from TV and recently made his return teaming with his brother Cody Rhodes having amazing matches with everybody.

I have been high on Dustin Rhodes ever since I saw his WCW stuff. The more I watch of him, the more he moves up my list of all-time great workers. This Snapshot only helped his case.

He is a master at selling and tag team work. His offense always looks stiff and crisp and he can make himself look like a small wrestler to gain sympathy, even though he is 6’6″.

I’d have to watch more, but his heel work left something to be desired though. He is a “natural” baby face that is for sure.

What do you think of Goldust? What were you favourite matches? Also, who would you like to see on a future snapshot? Share your thoughts on our Facebook page!