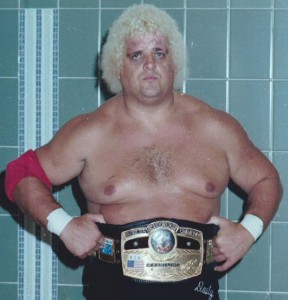 He is loaded with charisma and a gut, but how does his in-ring work fare?

Welcome to the very first issue of “The Wrestler Snapshot”. Each issue will focus on a different wrestler with around five matches being looked at to gain a better understanding of how they were throughout their career. If there is anybody you want to be the focus of an upcoming Snapshot please let us know.

With the Rhodes family in a prominent position in the WWE lately, there is no better person to look at than “The American Dream”. Rhodes is one of those guys that everyone knows as a great promo with lots of charisma, but what about him in the ring?

http://www.youtube.com/watch?v=HWTrMvJEOVE
Dusty Rhodes vs. Bob Backlund for the WWF World Title – NJPW May 27, 1980

After Dusty’s early career teaming with Dick Murdoch as the heel tag team The Texas Outlaws he turned babyface in 1974 in Florida. This is where the legend of Dusty started to grow. He had runs all over the NWA and even the WWWF main eventing against “Superstar” Billy Graham in a legendary feud. He won the NWA World Title on August 21, 1979 from Harley Race, but promptly lost it back to Race in 5 days.

The first match is a bizarre one that is hard to imagine happening. It takes place in NJPW and is against Bob Backlund with his lavender WWF World Title on the line. Another interesting aspect is that Backlund is clearly the favourite of the Japanese crowd and Dusty gets the boos. There is a really neat sports atmosphere where they both get flowers before the match and the American national anthem is played.

This is the tale of two parts. The first half of the match is all Backlund doing everything he can to keep the match entertaining. Dusty and Backlund put on headlocks and sleeper holds and take their turns hanging out in them and then fighting out. There are snippets of what made Dusty awesome with him throwing in bionic elbows and doing his dancing punches sequence like a boxer.

The second part of the match is really awesome. Backlund turns up the offense with a brutal atomic drop and piledriver. They head outside and Dusty rams Backlund into the post, busting him open. Dusty is just nasty going after the cut with elbows, being a complete dick.

The finish sees Backlund in the tree of woe and Dusty just lays waste to him until the referee gets in the way and Dusty shoves him. Post match is another wild brawl. Backlund gets his revenge busting Dusty open. The last part was really crazy and made up for the boring start.

After his WWF run Dusty returns his focus to Florida and the NWA. He wins the NWA World Title for the second time from Harley Race on June 21, 1981. This time he keeps the title until September 17 where he loses it to Ric Flair. Flair and Dusty have a lot of title matches from here on out including main-eventing Starrcade 1984 and 1985.

This match takes place in Puerto Rico and the date is not 100% confirmed.

This match is a lot more of a sprint then the Backlund match. One thing you can see about Dusty is that he can produce a great flurry of offense. His elbows and dancing punching boxer sequence really gets the crowd going. This one stood out from the last match due to Flair flopping around for it.

Something interesting in this match is Flair doing the Jerry Lawler hide the weapon spots. Another real strength of Dusty is his ability to sell and get sympathy from the crowd. Flair attacks his arm early on and his leg later and Dusty sells both perfectly. At one point he is fighting on one leg in a great visual.

The other highlight was Dusty hitting a HUGE lariat for a near fall. The finish is very similar to the first match with Dusty destroying Flair in the corner. Flair shoves the referee for the DQ and they have a brawl post-match. Overall a fun match to see in a different setting. A better start than the Backlund match, but a lesser ending sequence.

Dusty wins the NWA World Title one more time on July 26, 1986 from Flair, but loses it right back on August 9th. Dusty’s feud with Flair extended to the rest of the Four Horsemen, most notably Tully Blanchard. They had lots of heated contests. Here Dusty teams with the very hot Sting, coming off his draw with Flair from the first Clash of the Champions, to take on the NWA World Tag Team Champions of Arn and Tully.

The big note coming out of this match is that Dusty is great in a tag team setting. He plays an amazing cheerleader on the outside. He can sell and be a face in peril very well. Also, he can make a great hot tag with his funky offense. This is shown off well, because Dusty plays the face in peril and then later Sting does and Dusty comes in with the hot tag.

There are a lot of highlights in this one. There is a small great moment where Dusty is going to punch Tully, but he looks at his hand and decides to throw the bionic elbow instead! Dusty also hits a dropkick in this one. For his size, that is kind of insane. Later on, Arn nails Sting with a DDT on the concrete  floor.

The finish is kind of lame as Sting and Dusty look to win, but the Horsemen push the referee a few times and then the rest of the Horsemen run in for a DQ. This is shortly after Windham turned heel and joined the group. He goes straight after Dusty and destroys him with a claw. Dusty even blades off that.

This match was a lot of fun and had a very hot crowd. Even though Dusty was getting older it seemed like he was getting better. He added a dropkick to his offense and even though he was getting larger and slowing down, he was still doing the things he normally did great.

After Jim Crockett Promotions was bought by Ted Turner, Dusty’s days as the big star and head booker of the NWA were numbered. After leaving the NWA he went to the WWF, which is where I first saw him as a kid. We all know the polka dots and awesome music, but this match is before that. Actually this is his first televised and his second overall match in the WWF (excluding his previous run). He is still wearing his NWA gear at this point.

This match had a great start with “The Million Dollar Man” offering Dusty money to back out of the match, because he is not in his league. Dusty comes out and is the most over wrestler I have ever seen. Just a mega pop, which is strange for Boston of all places. Of course, he rejects the money and gives DiBiase some bionic elbows and punches instead. He then hands out the money to the crowd, which gave Lord Alfred Hayes a heart attack due to their being “one hundred notes” in the money.

Dusty does his awesome shine sequence and then DiBiase goes to work on him. DiBiase does not do much here, just punches and a sleeper hold. Dusty unleashes the dropkick again here, still impressive.

The finish is kind of neat as Virgil tries to trip Dusty, but Dusty stops it. As he is dealing with Virgil, DiBiase tries to attack from behind and Dusty moves and pulls out a surprise roll up victory. Dusty leaves the match through the crowd and is the most over man in the world at this point. It kind of feels like the WWF could had done more with him than him feuding with the Honky Tonk Man out of the gate.

In 1990 his WWF ran ended and he went back to WCW as a commentator. For the rest of his career Dusty would have a match here and there, but never work full-time again.

Steve Corino started calling himself the new “American Dream” and this is the blow-off match to that feud. This is a bullrope match which Dusty made famous with his feud with Billy Graham in 1979. I love that they came out in regular clothes for this. Just a nice small touch.

Most of the match is the two guys bleeding and attacking each other with the cowbell. They do have the classic attitude era thing of brawling in the crowd for a while. The crowd is hot and this is a bloody match.

One of the coolest parts of the match is when Corino sets Dusty up on a steel chair and goes to jump on him from the top rope, however he is tethered by a bull rope so Dusty just pulls it and sends Corino flying into the chair.

The finish was a little crazy as Jack Victory (Corino’s second) throws in a second bullrope, but Dusty is able to be the one to use it. With help of the referee, whom Corino beat up a while ago, he tapes the cowbell to Corino’s head and then destroys him with a chair and then an elbow drop for the win.

This match did a great job of making Corino look like a star, but still having the babyface get his revenge win.

This is going to sound strange to say, but it seems like Dusty Rhodes got better the older he got. Sure he was more limited in what he could do, but those limits took away from the boring parts of his early career. Later on, all he could do was use the elbow, do a fine shine sequence and sell. This really worked for him.

I don’t know if you could ever call Dusty a great worker, but he did do a lot of things well and made up for any shortcomings with his charisma. He will always remain one of my favourite commentators too.

What do you think of The American Dream? What were you favourite matches? Also, who would you like to see on a future snapshot? Share your thoughts on our Facebook page!