As I write this, it is 1:18 in the morning on Friday, November 15th, 2013. The PS4 has just been released to the open market, and I was at my local GameStop — to work, not to buy. Oh yes, this humble writer you’ve come to know and love picked up a part-time job at GameStop this fall, partly for the extra holiday money, but mostly to witness the major launches this season. I have just returned home from work, and I’ve decided to report on my experiences.

I can already tell you that this article definitely isn’t going to be the straight-forward newsy reporting I thought I’d be doing.

Let me preface this by stating that I had a lot of anticipation for this night. I remember working retail when I was younger and hearing stories from the electronics clerks about insane customers piling into the store in hopes of snagging the latest consoles. Hell, when I was a child, my mother used to tell me stories not unlike that of a war veteran detailing her struggle against rabid mobs to get my brother and I a Super NES back in the 90’s. Now that gaming has entered the mainstream and there’s such a harsh divide between Sony and Microsoft fans, I couldn’t help but imagine utter chaos at the stroke of 12:01. And I was ready to blog about it.

I was scheduled in at 10:00 PM, and considering how many calls we’d been getting about the PS4 leading up to this night, I expected that the store would already be teeming with anxious gamers eagerly awaiting their treasures. Imagine my chagrin, then, to find that there were significantly fewer customers waiting than predicted — zero, in fact. The only other people in the store were my co-workers, all of whom were passing the time by diddling on their phones. Yes, I was disappointed, but purely in the interest of group conformity I immediately followed suit by playing Baker Cat.

For a while, it was just the five of us idly exchanging comments and stories; I asked if anyone had seen the new South Park episode revolving around tonight’s launch and the impending Xbox One launch next week, my co-worker Kim told the story of how she’d gotten in trouble with higher management because she apparently pre-ordered a PS4 too early… And then Nate, my boss, perked up to tell us that the promo–release PS4s have already fucked up. I looked around at the empty store around us and quietly considered that these two things may be connected. Veronica, another co-worker, added that she’d heard about it as well, and that Sony officially stated that the defect rate was 0.4. I couldn’t resist clarifying if that was .4 of a percent, or if that meant 40%, which is something I probably wouldn’t be advertising on the eve of my product launch if it were me. (Yes, it’s the former.)

Customers trickled in every few minutes or so, and the phone rang off the hook exclusively with calls asking if we had any extra PS4s. I’d learned earlier in the week that we were allegedly getting 3 extras beyond the reserve orders, and I admit that part of me was hoping to see some hijinks involving customers trying to be one of the lucky trio. Unfortunately, it turned out that they’d already been sold earlier in the day, so my hopes of an impromptu cage fight were dashed. (One of my co-workers did, however, suggest we start telling the callers that we had one left and the first person to arrive gets it, just for our own amusement. Imagine the carnage that would’ve wrought.)

It suddenly occurred to me that our particular store is in the middle of a strip mall — a strip whereupon every other store had already long since closed, and which lacked any form of security. I began to wonder if the customers (let alone ourselves) would be safe between the door and the vehicles, lest we be assaulted by ninjas hungry for hot new PS4 action. Within five minutes of this thought crossing my mind, a police officer entered the store and announced that he would be watching over us in his patrol car to ensure that nothing went down outside. We all thanked him, and Matt (another manager) mentioned that hopefully his assistance wouldn’t be necessary, “knock on wood.” The officer looked him dead in the eye and said, “I don’t knock on wood. I knock on titanium.” He then thumped himself twice in the chest with the end of his flashlight, which made a metallic clang-clang, and sauntered back out the door.

The clock finally made its way around to the 11:00 hour, and the night abruptly gained momentum. Customers poured in out of nowhere, to the extent that I joked that they were all waiting in a clown car and shouted “NOW!” at 11:01. Our tiny store suddenly became much more difficult to navigate, and most of my duties revolved around not getting stepped on.

The customers seemed content to talk amongst themselves, as almost everyone had brought a friend along, but I noticed some shenanigans going on at the front and decided to investigate. The hubbub had arisen around one of the Sony signs — particularly the one advertising the price drops of PS3s now that their successor would be hitting the market. There seemed to be a sliiight problem.

In the midst of making sure everyone had their consoles paid and appropriately numbered, Nate instructed Kim and myself to go in the back and find a PS3 display box. Puzzled, we asked what the hell that could possibly be used for on the launch of its successor, other than maybe as a museum display. We were informed that one of the customers was planning a devious little trick: Apparently he’d ordered his son a PS4 without telling him, but was going to re-box it as a PS3 and pretend he’d unwittingly gotten the wrong one.

Granted, the PS4’s box is much wider than the PS3’s, but I’m sure the guy could come up with a way to (carefully) fit everything inside if he really wanted to. If all else failed, he could just wrap the box with a brick inside and hide the actual console somewhere else. No matter what he decided to do, I congratulated this fine gentleman on his brilliance and secretly wished I could see his family’s home video of Christmas morning.

At 11:30, Nate and I began corralling the customers into a line according to their receipt numbers. Every receipt for a paid off PS4 was given a sticker with a number, which would match with the numbered PS4 units in the back. In this way, we could ensure that everyone got exactly what they’d paid for, right down to the ticket. Unsurprisingly, one of the other store managers — a humorous fellow by the name of Ray — was #1, which meant he was at the very front of the line. As my duty for the night was to take tickets and match them with their corresponding unit, I found myself face-to-face with Ray. I asked him how it felt to be first in line.

“It’s exciting!” he told me with a big grin.

“You know I’m going to write an article about this. Wanna provide me with a quote?”

Ray stared blankly for a moment, then grinned a second time. “…It’s exciting!”

Truly, this was the pinnacle of journalism, and I promised him I’d include it in this post.

As the minutes crawled by, the line, which stretched all the way to the front door, became more and more animated. The moment of truth was nearly here! It wouldn’t be long before they’d each claimed their prize and ferried them home to their respective gaming dens, where they could then immerse themselves in the sheer glory of Sony’s latest creation. At 12:00 AM on November 14th, this was my view from my position at the PS4 threshold. 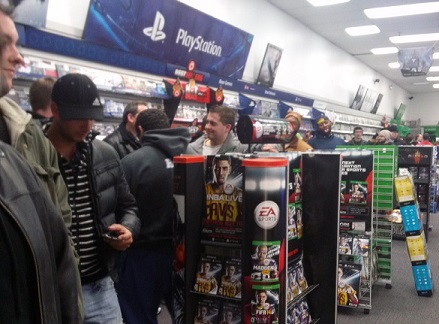 Three minutes. Three minutes. For all of the build-up, all of the hype, all of my visions of gamers falling to their knees and bursting into tears with sheer joy before backflipping out the door, the whole launch was over in three fucking minutes. I can’t even go to the bathroom in three minutes. If I’d had to pee, I literally would’ve missed it.

Just as when I’d arrived two hours before, the store was now solely populated by myself and my co-workers . We were scheduled to stay open until 1:00 AM, just in case anyone else was coming that hadn’t gotten here in time for midnight but still didn’t want to wait until the next morning. And it’s a good thing we did, because a stray customer did arrive — at 12:07.

I’m scheduled to work the release of the Xbox One next week as well. I plan to do an article on that release, too, but if it’s this anti-climactic I may just copy/paste this one and change the console names.