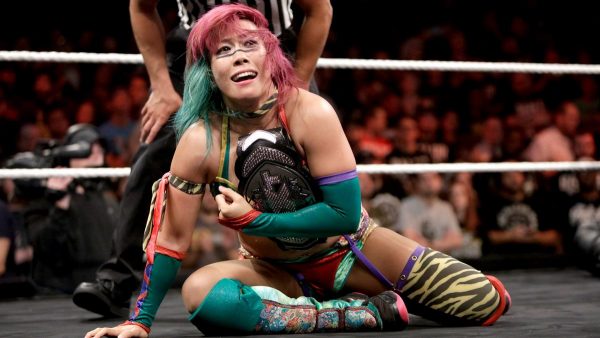 The SmarK Rant for NXT Takeover: The End…Of The Beginning (06.08.16)
Live from Orlando, FL
Your hosts are Tom Phillips and Corey Graves.

What a terrible wrestling name. The crowd immediately chants “La Sombra” at him. Yes, that did used to be his name. Tye gets a nice rollup for one, and this “10” gimmick is just crazy over in the opening match role. They do a criss-cross and Almas gets a dropkick and snaps off a rana to put Tye on the floor, and he does some assorted showboating before walking into a backbreaker for two. They fight to the top and Cien gets a moonsault for two, a nice variation where Tye moves and Almas lands on his feet and does a standing moonsault instead. Almas headstands in the corner to show off, and Tye superkicks him for two, and the kneepad is down. Almas escapes the dreaded Tye-Breaker (ha!) and comes back with a bulldog and double knees in the corner for the pin at 5:15. Pretty underwhelming debut for Almas, all things considered. **1/2

Dash controls Gable with a wristlock to start and they immediately get to beating on Chad in the corner, but Gable comes back with some vintage flying headscissors on them both. Jordan throws dropkicks and gets two on Dawson, and it’s a donnybrook early. Alpha with DOUBLE ANKLELOCKS to clear the ring and that’s pretty great. They trap Dash in the corner and dominate on the arm, but Dash counters by raking the eyes and Dawson comes in. Gable keeps coming with a backslide and rollup for two, but Dawson elbows him to the floor and Alpha quickly regroups and clears the ring AGAIN. These poor heels just can’t get anything going tonight. Back in the ring, Gable finally tries one headscissors too many and gets clotheslined on the top rope to play Ricky Morton. They work the arm in the heel corner, but Gable keeps fighting with a sunset flip on Dawson for two, only to walk into a spinebuster while lunging for the tag. That was a beautiful spot. I love how Dawson used the momentum against him there. Dash puts Gable down with a forearm and goes back to cranking on the armbar. Dash puts Gable on the top rope, but stops to gloat and gets caught with a hanging armbar from the outside in another crazy spot. Jordan gets distracted and the Revival hits a double-team legdrop on Gable for two. I think that was the Midnight Express’s Veg-O-Matic. Gable finally evades them and it’s hot tag Jordan and guys are flying all over. Exploder suplex gets two. Jordan gets caught in the heel corner to cut off his comeback, and Dawson gets a sunset flip off the top for two. Dawson pounds him with forearms, but Jordan makes the tag and dropkicks Dawson into a Gable german suplex for two. Dash takes out Jordan from the floor while Gable anklelocks Dawson, but Dash slugs him over and Dawson gets two with a handful of tights. And Gable takes another beating, but reverses a Doomsday device into a belly to belly in an awkward spot, which gets two. Back to JJ, but he walks into the Shatter Machine and the Revival regains the titles at 15:51. Alpha has to be getting called up now. The crowd was completely floored by that finish, but big things are ahead for our heroes, I bet. This was old school tag team awesomeness from these two teams, though. **** And then to make matters worse, a couple of jacked up thugs attack them after the loss and beat the hell out of them. And apparently they’re managed by Precious Paul Ellering.

The crowd actually continues singing Nakamura’s theme, which is pretty cool. YEAOH! They trade some holds on the ground and it’s a stalemate, but Aries takes him down with the low dropkick and tries the Last Chancery, which Nakamura escapes. He comes back with a kneedrop and the boot rubs in the corner, but the crowd wants one more time and it backfires on Shinsuke, as Aries takes him down and works the knee. Never listen to the crowd! Aries pounds the knee in the corner and drops an elbow from the middle rope for two. Slingshot senton misses and Nakamura comes back with elbows, but a blind charge misses and Aries drops another elbow for two. Aries wraps him up in a neck vice submission, but Nakamura escapes and puts him down with a high kick and makes the comeback. Knee strike in the corner gets two, but Aries fights back with a rolling elbow into a rollup for two. Another elbow puts Nakamura on the floor and Aries follows with a dive, which gets two. Aries pauses a bit too long and Nakamura pulls him into a triangle, forcing Aries to make the ropes. Nakamura with a gourdbuster, but Aries counters the Kinshasa into a backdrop suplex and the Last Chancery. This time Nakamura makes the ropes. Aries takes him down with a rana and follows with a dropkick in the corner, but the 450 misses. Nakamura misses a blind charge and they slug it out with forearms on the apron, until Aries wins that with a Death Valley Driver on the apron. Aries follows with another dive and knocks himself silly on the railing, and back in for the middle rope knee, exploder, and Kinshasa to finish at 17:02. I don’t think it quite lived up to what people were expecting out of it, but it was a hell of a fight that built to a huge finish. ****

Asuka tries throwing kicks and gets thrown around as a result, but comes back with an attempt at an Octopus. Nia counters out with a backbreaker for two. Jax pounds away on the ropes while there’s actually a heel section cheering for her. Asuka tries a guillotine, but Jax counters out with a suplex for two. Well, she’s learning. Asuka takes her down with an armbar, but Jax powerbombs her into the corner to break and wraps her back around the post. Asuka slips down with a kneebar this time, but Jax makes the ropes. Spinebuster, but the legdrop misses and Asuka fights back again with a missile dropkick. Backfists and butt-butt gets two. She tries another flying armbar and Nia just powerbombs her for two, but Asuka sucks her into an armbar off that and tries for the Asukalock. Nia is too big, so Asuka chops her down with kicks and gets the pin to retain at 9:08. Never really felt like Asuka was in any serious jeopardy of losing, but it was a good big v. little formula. ***

It’s the lame escape/pinfall/submission rules tonight. I was hoping they’d go old school and just do pins. Joe slugs away to start, but Finn dropkicks him down and they try to send each other into the cage. Finn keeps throwing chops, but Joe yanks him off the top rope and hurls him into the cage. Finn’s back is already bright red from that. Joe pounds on him in the corner and follows with an enzuigiri, then bootrakes him for two. Another trip to the cage for Balor and Joe wants to walk out, but Finn dives for the open door and Joe has to hang on. Joe with a german suplex for two and they fight on the top rope, but Joe hits him with an enzuigiri on the top rope and brings Finn down for two. Finn dodges a charging Joe and fights back with running strikes while Joe is trapped in the ropes, but he can’t climb out. Joe comes back with the uranage and Muscle Buster, but Finn turns it into a sunset flip for two. They slug it out and Finn gets the Pele kick. Back to the top rope for another slugfest, but Finn takes him down with a Sling Blade from the top for two. Corner dropkick misses and Joe hits the Muscle Buster for two. Joe is just annoyed now and tries a powerbomb into the cage, but Finn escapes and comes back with another Sling Blade and a pair of corner dropkicks and the Coup De Grace for two. Finn tries to finish with the DDT, but Joe reverses to the choke, so Balor rolls out of it and double stomps him again. Joe keeps fighting, so Finn goes to the top of the cage and gets caught by Joe with a top rope Muscle Buster, and that’s enough to finish him at 16:00. I actually liked the intensity of Dallas better, but either way I’m pretty much done with this feud now. This one just never felt like it got to the level of their previous matches, maybe due to the cage stip, I dunno. Still great but not match of the night or anything. ***1/2

Nothing to complain about here. Five solid matches, no bullshit, and I was legit shocked by the tag title switch. Highly recommended.