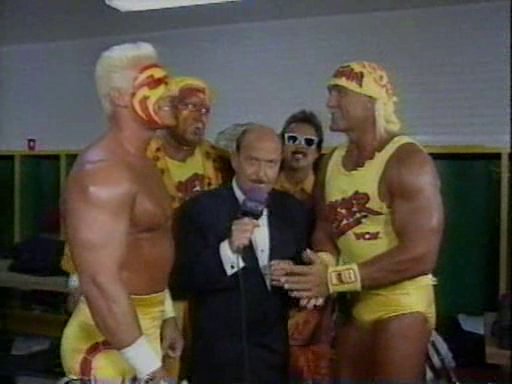 Back on the horse, and WHAT a show to pick things up again with. Yeesh. This is one I’ve never actually seen before, as Hulk Hogan’s title reign had driven me away from the promotion and Flair’s “retirement” sealed the deal. So there’s a chance that Hogan/Sting/Evad v. THE THREE FACES OF FEAR might not be terrible, much like Schroedinger’s Cat might not be dead. So yeah, since the last Clash, Flair has been retired and the mysterious masked man was unmasked as Brutus Beefcake instead of Curt Hennig. Good times all around.

Robert Parker joins Mean Gene to start and challenges the winner of the tag title match to a match against Arn Anderson & Bunkhouse Buck on WCW Saturday Night, which pretty much gives away the result.

You have to hand it to Marcus Bagwell in that he could be repackaged into whatever generic tag team wrestler they needed that week. There’s a certain amount of talent involved there. Orndorff quickly beats Bagwell down and Roma comes in with a bodypress for two, but the babyfaces clean house. Patriot controls Orndorff with armdrags and a hammerlock, but Roma comes in and gets a backbreaker for two. He gets cocky and Patriot gets an atomic drop into a Thesz Press for two, which is actually a nice combo. Over to Bagwell, and he immediately gets double-teamed and beat up on the floor to become hick-in-peril. Roma with a powerslam for two, but Bagwell gets a backslide on Orndorff for two. Bagwell with a sunset flip for two and Pretty Wonderful dumps Patriot, and then we get a very WCW ending as the champs try a Powerplex on Bagwell, but Roma gets tripped up and Bagwell lifts his shoulder while Orndorff lays there like a moron. So Bagwell & Patriot win the tag titles at 10:10 on a vertical suplex gone HORRIBLY WRONG. Yeah. **1/2

Honky in WCW was a Thing That Could Have Worked, but his demands were apparently ridiculous even by WCW’s low self-esteem-related standards. Think about that – someone from the WWF had contract negotiations so outlandish that even ERIC BISCHOFF, the guy who signed every ex-WWF employee from the wrestlers to the guys who ran the trucks for double the money without blinking, had to say “Hold on there, I don’t think you’re worth that much money.” I know, Honky Tonk Man being hard to get along with, mind blown. Honky tries a headlock and Badd takes him down for a hammerlock and follows with an atomic drop to send Honky running away. Back in, Honk gets a classic cheapshot out of the corner and takes over. Fistdrop gets two. Shake Rattle N Roll is countered by Badd (and how could they call it that without getting sued, anyway?) and he makes the comeback. Badd pounds away in the corner and a kneelift gets two, but TRAGICALLY, the ref is bumped. Honky lays him out with the guitar and draws the DQ at 6:11. Man, watching Honky go out there and do all his dated 80s Memphis bullshit was pretty sad. * This was supposed to set up the final showdown at Starrcade, but Honky got fired (gleefully, according to Bischoff) and Badd wrestled Arn Anderson instead.

Meanwhile, The Three Faces of Fear have some generic, vaguely threatening words for Hulkamania. Brutus Beefcake as a supposed top-level heel was just…I don’t even have the words.   The first problem I suppose was that he looked like someone’s dad out for a run after a day at the natural health food store.

Holy god these teams wrestled each other a lot from 94-97. The graphic actually identified “Harlem Heat with Sensuous Sherri”, thus giving away the big twist ending, because WCW. Tony clarifies that the Hoffman brothers are in fact true blood relatives, much like other real brother teams. Like the Andersons. Sigh. The Nasties clean house, but Stevie Ray pounds on Sags in the corner before getting caught in the Nasty zone. THEY BE CLUBBERING, TONY! Oh wait, Dusty’s not on commentary. I retract the clubbering. That gets two for Sags. Nasties go to work on the leg and we take a break. Back with Booker superkicking Knobbs out of the ring to take over. Spinkick and Booker goes up and misses an elbow, allowing Sags to get the hot tag. That was quite the heat segment. Stevie bails and tries to call his secret manager on the phone, but the Nasties beat up him up back in the ring as we reveal that Sherri is in fact their secret weapon. The Nasties get distracted and the Heat win somehow at 12:00 as no one on the crew was paying any particular attention. Because WCW. Thankfully Sherri was a much better fit for Harlem Heat and actually got them to the next level. *1/2

Vader smacks him around in the corner and clarifies that it ain’t no tea party. Just in case Dustin was confused on that point, I suppose. So Dustin charges and out and beats on Vader in impression fashion, then rips off his mask and slaps the shit out of him. Now we’re talking! Crossbody gets two for Dustin. Clothesline puts Vader on the floor and they brawl out there, as Dustin puts Race on his ass for good measure and FINALLY wakes up the crowd. Back in, Dustin stays on him and if it was UFC the ref would be stopping it at this point. Dustin with a suplex and Vader takes another breather, clearly shocked that he’s in this position. Back in, Dustin takes another run at him and this time it backfires, and now Vader boxes him in the corner, but misses a charge and Dustin gets a rollup for two. Vader pummels him down again, but he charges and Dustin catches him with a powerslam out of the corner. Dustin with a lariat and he pounds away again, but Vader tosses him over the top and right into the railing in a vicious bump that the camera crew totally misses. Back in, Vaderbomb gets two, so he does it again, HARDER, and it also gets two. Vader unloads again in the corner, but Dustin is too stupid to stay down and comes back with another powerslam before winning a slugfest and going up with a lariat for two. A DDT off the middle ropes gets two. Bulldog gets two and he goes after Race again, but Vader hits him from behind and finishes with the inverted powerbomb at 11:54. I recall this being where smart fans accepted Dustin Rhodes once and for all. **** Jim Duggan makes the save to set up their Starrcade US title match, which also ended up pretty good.

End of the line for Austin. Steve with hair and a goatee is such a weird combo for him. Austin protests hairpulling a few times to start, and Vader runs in for the DQ immediately. I thought this show was running long.

Mr. T is the special referee, dressed in what appears to be striped pajamas, complete with a nightcap. The Hulkamaniacs dominate Kevin Sullivan to start, but soon everyone is in the ring and the suck is running wild. Avalanche splashes Dave’s shoulder and he’s immediately taken back to the dressing room like a huge pussy, leaving Hogan and Sting alone. Wow, left alone against Brutus Beefcake AND part-time wrestler Kevin Sullivan? How will he ever survive? So Butcher pounds away on Hogan and Avalanche blocks a slam for two. Bearhug time, which allows me to ponder why they didn’t just do Hogan v. Avalanche for Starrcade, since that was at least a thing that popped a buyrate four years previous and thus had slightly more than a snowball’s chance in hell of being something worthwhile. Beefcake had barely even been active as a wrestler since that time and was mostly forgotten. Avalanche misses a splash and Hogan makes the tag to Sting, who hits Avalanche with a pair of Stinger splashes to no avail. Sullivan quickly comes in for the double-team to take over again, and Butcher unleashes a devastating choke. Like seriously, Beefcake couldn’t even be bothered to get into shape. Do some steroids and get a tan! If he had come in looking like the Disciple they might have had something. Sullivan goes up and Sting slams him off, but it’s hot tag Hogan and he quickly kicks Butcher’s ass. And then pins Sullivan at 10:54 because even 3-on-2 Hogan can’t do a job to build up the biggest show of the year. Nothing really to the match as there was no real heat segment and it was just a big mess. *

Welcome to the Hogan Era. Definitely check out the lost classic that was Vader v. Dustin Rhodes, and skip the rest with prejudice.