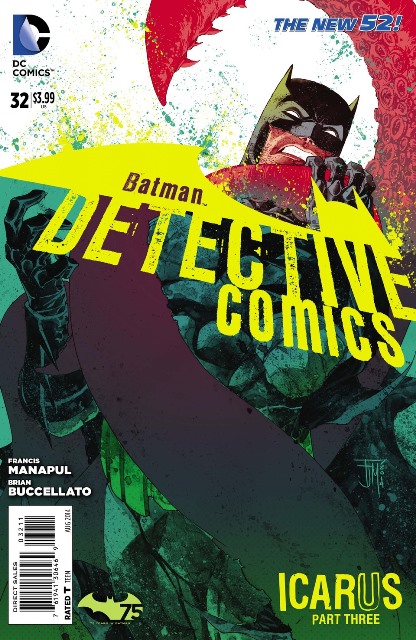 The next great Batman murder-mystery continues to unfold in “Icarus” part three, brought to you by the acclaimed creative team of THE FLASH! Batman is caught in the clutches of the crime boss known as “The Squid” as he digs deeper into a whodunit for the ages!

Picked because: The mystery of Icarus deepens with each issue and the team of Manapul and Buccellato are telling it perfectly. Outside of Paul Dini and Bruce Timm, nobody has told Batman stories that felt…just right. For a while now, Scott Snyder and Greg Capullo have been the team to deliver great Batman stories. You can chalk up another great Batman title. What makes it so great? The title is finally taking its namesake seriously. This is a mystery story, through and through. There’s no telling the story from the villain’s perspective or spoon-feeding the plot to readers. What’s even more interesting is how this story also seems to be a love letter to Harvey Bullock fans. His demeanor has always been rough around the edges and cold to most people around him, but it’s his sense of justice and dedication to solving the case that makes him endearing to fans. This dual perspective of vigilante and police detective is making for some great drama. And don’t forget about the incredibly gorgeous art from Manapul. His layouts have become more traditional for this run compared to his time on The Flash, but it still sets a perfect tone for the story. DC has struggled to make Detective Comics feel relevant in the Batman Family, but it’s finally standing, as it should be, head-and-shoulders above the vast majority of those titles. 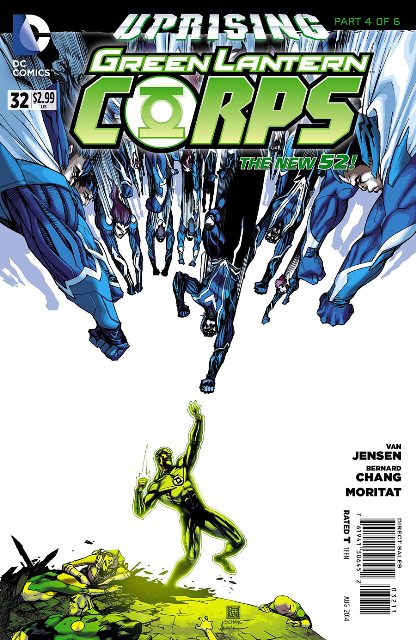 “UPRISING!” part 4! The casualties of the uprising against the Green Lantern Corps reach monumental proportions as the Durlans reveal their sinister endgame! John Stewart leads his ragtag team of Lanterns against an army of shape-shifters that can assume any form. Meanwhile, one Lantern must decide if he will make the ultimate sacrifice to give the Corps any hope in this war.

Picked because: Sodam Yat is back and it’s about time for the Daxamites to join the fight against the Durlans! Last issue had one of the coolest moments the series has ever had with Yat’s long-awaited and triumphant return and Jensen is looking to up that even more here. The Durlans plan to copy and take the abilities of the Daxamites (essentially Kryptonians, but without the weakness to Kryptonite) so it’s imperative the Green Lantern Corps gets to them first. Uprising has turned into one of the best Green Lantern stories in recent memory and is looking to join the ranks of the Sinestro Corps War and even Blackest Night if it stays on this path. John Stewart getting center-stage is exactly how this title should have been for a long time. While he’s had some really great stories in the past, this is one that will go down in history as truly character-defining. If you loved John in the animated Justice League and Justice League Unlimited series, you owe it to yourself to pick this up. He’s never been written more effectively and with as much conviction. This is the kind of leader the Green Lantern Corps could get behind no matter what. And his leading of the newest Corps members (especially Jruck) is becoming one of the essential elements of the book. Don’t miss out on this! 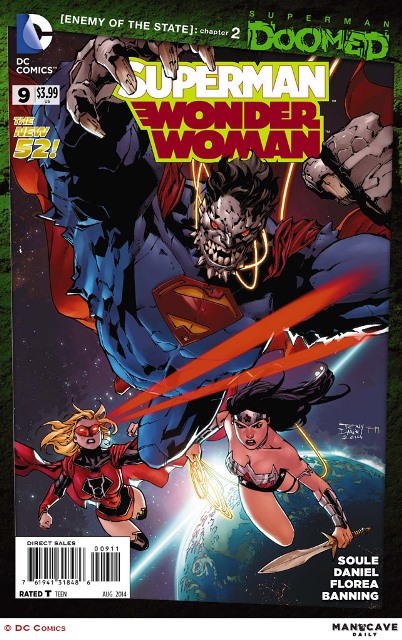 “SUPERMAN: DOOMED” continues with “ENEMY OF THE STATE”! As things get more dire on Earth for him, the Man of Steel may have to go into exile in space, but the self-proclaimed protectors of Sector 2814, the Red Lanterns, don’t want him there either! Don’t miss this deadly face-off between Kal and Kara!

Picked because: Doomed has turned out to be the almost-weekly Superman crossover event we never knew we always wanted. It’s hardly a retread of the Death of Superman as this story has taken the Man of Steel and put him in a position of becoming what he fears most: and unstoppable rage monster! Given Greg Pak’s history with writing some great Hulk stories for Marvel (World War Hulk, Planet Hulk) this is right in his wheelhouse. This issue follows up the amazing Action Comics #32 and is giving us the other rage-filled Kryptonian, Red Lantern Supergirl, in what might be the fight of her young life. She might actually be the only one who’s willing to do what’s necessary to put Superman down if it comes to that. And after what’s happened, it looks like it’s going to come to that sooner than later. Wonder Woman’s character development during this arc has been truly what the Superman/WW relationship needed. She’s showing just how much she truly loves him and is finding out that separating yourself from those feelings despite what your love may have become is never easy. This is some powerful storytelling on the part of Charles Soule and no Superman fan should be missing this. 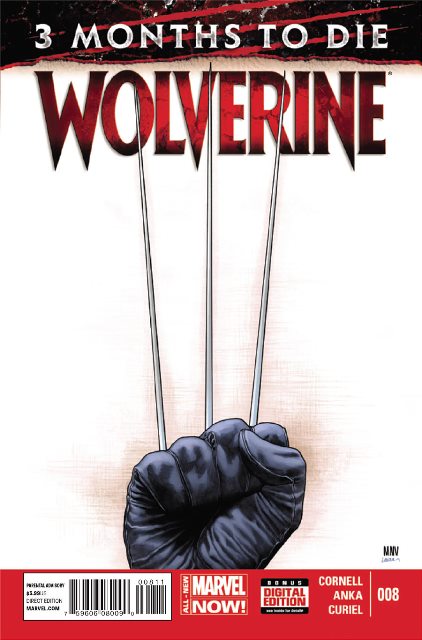 • Three Months to Die – The title says it all!

Picked because: Wolverine is about to die. That’s not hyperbole, Marvel has made it clear Wolverine is about to bite the big one and this is the story that leads into his ultimate demise. While Paul Cornell’s handling of Logan has been iffy during his tenure with the most popular X-Man, this issue puts things in the dire perspective they need to be in order to become captivating. Wolverine has never been faced with his own mortality before and without his healing factor, he’s truly vulnerable in a way he never has been before. Training with Iron Fist and Shang Chi is likely to have as many exciting moments as it does funny ones. And it’s a team-up of some of the best hand-to-hand tacticians in all of Marvel Comics…how can you pass that up? What’s going to make this even more intriguing, though, is how Logan handles the fact that he won’t be coming back from this one. His character has had moments of great humanity behind the beast, but now he’s being given a moment to be more open than ever. This story is about getting to the heart of the character and any big Wolvie fan needs to make sure they read this. Only three months left until we have to say goodbye for now. But maybe he’ll make his way back one day. If Colossus and Nightcrawler could do it… 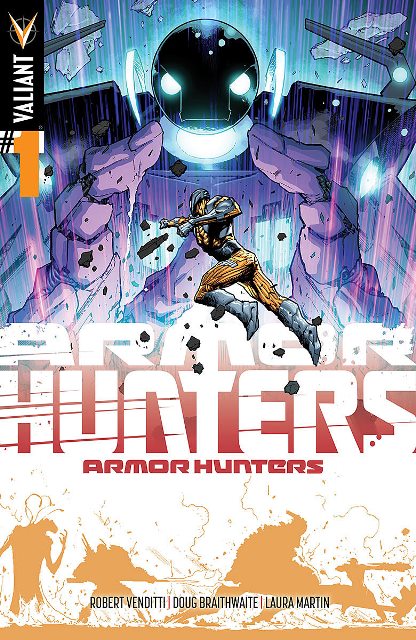 A relentless and surgical strike team from the farthest reaches of space – sworn to exterminate the X-O Manowar armor and all like it – have found finally their final target. They will hunt. They will trap. They will kill. And they will rid the universe of the X-O Manowar’s incalculable destructive power…even if it means taking the Earth with it. In the tradition of HARBINGER WARS, Valiant’s biggest heroes launch into the summer’s blockbuster 18-issue crossover event!

Picked because: This is arguably the biggest event Valiant has had since it relaunched in 2011. Venditti’s singular vision for the character has made X-O Manowar into some of the best superhero comics being published today. The lead up to all of this has been well crafted, but the point here is to give a big payoff to all the lead-in stories and to give new readers a chance to see what all the fuss is about. And that fuss is well-founded. This is going to be the biggest crossover Valiant has tried yet, with lots of tie-ins and an expansive narrative that involves every corner of the Valiant Universe. Such an ambitious undertaking could go either way for Valiant, but given the track record of Venditti with this character and his other story arcs, there shouldn’t be much worry he’ll pull this off, too. Unity brought lots of characters and concepts together, but this will be the first time they’ve truly been used in tandem with each other in a way that will change the face of Valiant going forward. This could easily be the biggest summer event of any comic company.