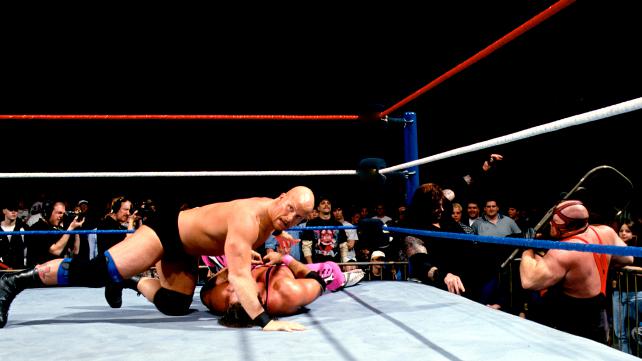 In Your House 13: Final Four

Hello there grappling afficianados, Cowboy here with this week’s hotly anticipated installment of The Cowboy Goes to Class. This week the Professor assigned me WWF’s 1997 In Your House: Final Four card. 1997 was a big year for the Cowboy. I graduated high school, moved out to college, and enjoyed some pretty interesting life experiences. What I did not do, however, was watch much wrestling. In other words, this is a first-time watch for me with zero preconceived notions. Let’s break it down…Cowboy style.

Match of the Night: Vader vs. Undertaker vs. Steve Austin vs. Bret Hart – Four Way Elimination Match for a shot at the WWF World Championship

Given the participants, it would have been an absolute shock if this match did not win Match of the Night. Needless to say, this one did not disappoint. This match was an absolute slobberknocker of epic proportions. Within the first five minutes, Vader’s eye is busted wide open after some outside the ring brawling with Taker. As a big boxing fan, I can say with certainty that this cut would’ve caused a fight to be stopped by the ringside physician had it occurred in a boxing match (as an aside, the announcers mentioning the upcoming Hector Camacho vs Sugar Ray Leonard bout was priceless). Vader not only fights through the cut as if it didn’t happen, he is arguably the most impressive guy in the bout. The more I watch Vader, the more impressed I am by him. He has great stamina and agility for such a big guy and he is tough as nails. Vader Time!!! As the match unfolds, these guys take turns beating the hell out of each other both in and outside the ring. My favorite Bret Hart matches are where he has to lose the “Excellence of Execution” moniker and dig down deep to win wars of attrition against guys who are way bigger than him. This is one of those occasions. Coming into the bout, Shawn Michaels announced he had to vacate the title due to a catastrophic injury. Given that, I considered Bret to be the favorite to win. This proved to be correct as Bret took the bout by eliminating Taker with some accidental help from Stone Cold. My favorite thing about his match was that even though it was an elimination bout, all four guys stayed in the match for the majority of the time. Once Stone Cold was eliminated first, it wasn’t long before the match was over. This dynamic allowed all of these superstars to have extended one-on-one action against each other without two combatants ganging up on someone. Awesome match and clearly the best on this card!

We have our first back to back Performance of the Night winner…Big Van Vader! As stated previously, Vader was extremely impressive in this bout. Like the last bout, it is his stamina that impresses me most. Most big guys fight for five minutes and are completely dead…I’m looking at you Big Show…but Vader seems to never lose steam. He fought this whole bout at 100 mph with a brutal gash above his eye and he didn’t even seem winded. That, coupled with his unique athleticism, is quickly making him one of my favorite wrestlers to watch. I also love the fact that he was aligned with Paul Bearer for this one…what an odd couple they make. Vader was in there with three of the biggest stars in the history of the WWF and more than held his own. For that, he wins his second consecutive Performance of the Night.

Rocky defended his newly minted Intercontinental Championship against Triple H in a rematch. It is pretty awesome to see two guys who would basically shape the company for the next decade go at it before they had truly reached the big time. I love the Rock. Let’s get that out of the way now. I love the character, the sayings, the singing, the People’s Elbow, and the Rock Bottom. With that said, I’ve never thought of the Rock as a great “technical” wrestler. He lays the smack down and talks trash, but generally only does a couple of different moves. Much to my surprise, in this bout, he really wrestles well. In particular, he lands a beautiful high cross body off the top rope that had my jaw on the floor. Even the finishing sequence has Rocky pinning Triple H with a bridge. Awesome performance by Rocky and a very nice display of his wrestling skills.

I have fond memories of the Nation…I guess my mind must have been clouded at the time. How many guys have come to the ring for a six man tag? I counted nine…half of which served no purpose. Maybe I’m wrong but this seemed like a blatant ripoff of the nWo stuff going on in WCW. Also, the match itself was pretty weak and the Nation did nothing to impress me. I expected more out of these big stars. 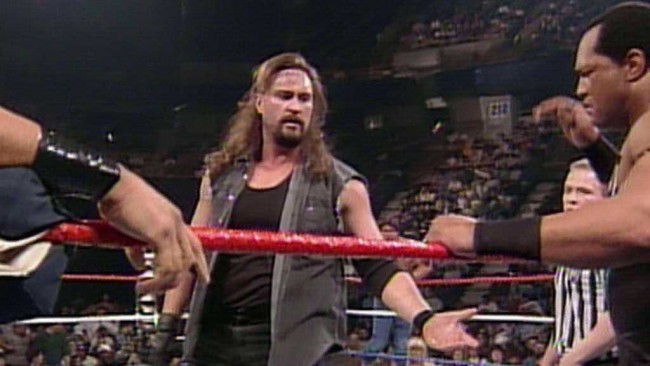 Overall I really enjoyed this show and thought it was very solid top to bottom.  The Main Event is awesome and I strongly suggest you watch it if you haven’t seen it, or watch it again if you have. Thanks everyone for reading!