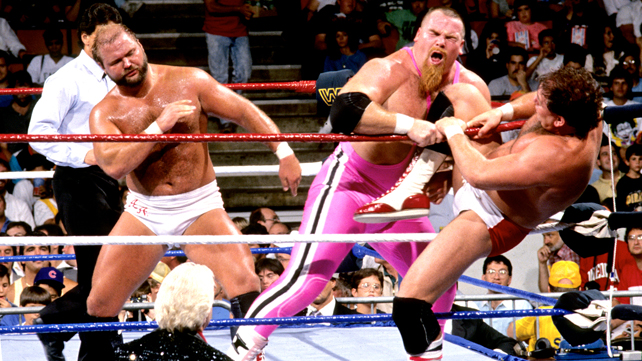 This week Professor Rozzero has tasked me with watching some great tag team matches. I’m looking forward to this new wrinkle. Also, it will be nice to watch some real wrestlers go at it after last week’s celebrity matches debacle. First up, we have the legendary Hart Foundation going up against the Tag Team Champions, The Brain Busters (Arn Anderson and Tully Blanchard). We find out at the beginning that the tag titles will not be on the line in this match as it is a non-title tilt. The excuse given by the Brain Busters is that they didn’t hold the titles at the time the match was signed so there is no way they should have to defend them.

I loved the Hart Foundation back in the day, but don’t specifically remember this match. I feel that the Hitman and the Anvil were the perfect tag team. Bret was the athletic, technically sound wrestler and Neidhart was the strong, scowling brute. At this point, they’ve worked together for so long that everything seems like second nature for them. As far as the Brain Busters I’m not too impressed. I’m pretty unfamiliar with both guys (although I have seen Anderson wrestle before). Blanchard really doesn’t do much for me. To my eyes, he’s a combination of small, slow, and unathletic. He doesn’t even belong in the same ring as the Hitman. Anderson is a bit better as he fills the tough guy role for the team. Clearly, the best thing the Brain Busters have going for them is their manager, Bobby “The Brain” Heenan. Heenan’s presence always livens things up and that is certainly the case here.

The Hart Foundation dominate this match from the start. The Hitman and the Anvil are smoothly tagging in and out and delivering steady punishment to the tag team champs. The Brain Busters can’t seem to get anything going. Eventually, Anderson intereferes and all four guys are fighting in the ring. During the chaos, Bret drills Blanchard and pins him. Unfortunately for the Hart Foundation, the referee’s back is turned due to Bobby “The Brain” distracting him from outside the ropes. This gives Arn Anderson and opportunity to drill the Hitman with a double ax handle off the top rope while Bret is pinning Blanchard. The referee turns around and Anderson gets the cover on Hart.

The result is a bit surprising as I had assumed that since the tag titles weren’t on the line the Hart Foundation would take this one. With that said, it was a typical victory for Heenan backed combatants. Although I won’t be covering any more of this feud in this column, given the way the match ended, I’m sure this isn’t the last time we see the Hart Foundation and the Brain Busters squaring off.  Overall, a decent match but nothing to write home about. 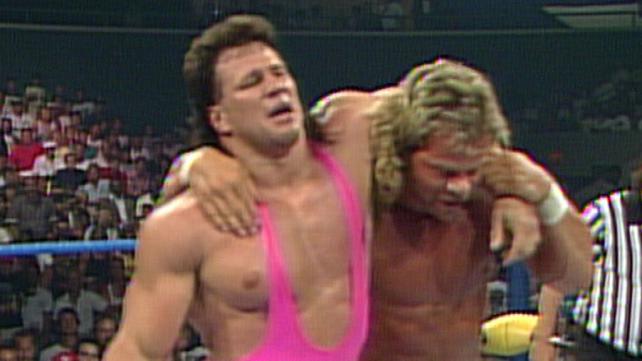 Sting & Lex Luger vs. The Steiner Brothers – WCW SuperBrawl I

Of the the three matches I was assigned this week, this was the one I was most looking forward to. Having been strictly a WWF fan growing up, I have a very limited viewing history with WCW. What I have seen, at least that I’ve covered in this column, has been average at best. My hopes were high for this match. Sting was the face of WCW for years and their most recognizable star and Luger was always a high level performer (I remember the Narcissist well from his WWF run). I had only previously seen one match of the Steiner Brothers (during our live watch of the first Monday Night Raw on the Place To Be Podcast!) and came away very impressed.

Before the match starts, the inexplicable pre-match montage is aired. Why WCW thought that showing a highlight reel of the events leading up to the match where the only audio is terrible music is beyond me. This opening has actually made me less excited to see the match. They would be better off just not doing anything at all. Hopefully someone in charge got their head out of their rear end and changed this. It is brutal.

Anyway, back to the match. This match absolutely delivered. All four of these guys brought their A games and the action was fast and furious. The crowd seemed to actually like both teams equally, which is rare. Having not seen much of Sting before, I was particularly impressed with him and can see where all the hype comes from. He flies around the ring with total disregard for his body. The other thing that struck me about the match was that for a group of behemoths, these guys were all pretty agile. There were lots of big, athletic moves off the ropes that are usually reserved for the smaller guys. The match is just fantastic as they go back and forth with no one able to get the upper hand.

My only gripe with this match is the finish. Things were really heating up and I felt the match could have gone on for at least another 5-6 minutes when Nikita Koloff comes down and interferes. Apparently he was after Luger, but Sting saved his partner’s bacon and took a chain shot for him. The Steiners are able to get the pin on Sting and they win the match. I understand that some matches must end with interference, but from what I can gather Koloff only had an issue with Luger. Why end such a great match with such a weak angle? 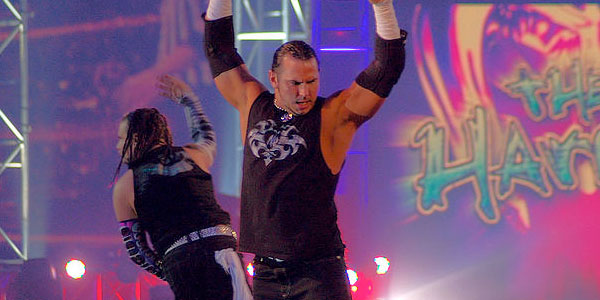 The third, and final, match I watched this week was the Hardy Boys vs. MNM from the Royal Rumble in 2007. This was an interesting one for me as I remember the Hardy Boys when they were younger. They were definitely one of my favorite teams then as I loved their high flying aerial attack. MNM, on the other hand, I had never heard of. Based on the match preview, these teams had been feuding for quite a while. Also, it looks like Matt Hardy has an injured jaw. I have no issues with either team’s entrance. Both are fine. I’m not completely fired up for this one, but hopefully the in-ring action kicks things up a notch.

The match itself is very good. The Hardys, while not quite as athletic as I remember them, can still bring it and I’m pleasantly surprised with MNM. These are four high level workers giving it their all. Things go back and forth with no one gaining a clear advantage until Nitro is able to drill Matt coming off the top rope. MNM goes to work on Matt’s busted jaw. For a preliminary match, these two teams seem to have a real disdain for each other… and I like it! Matt is beat down by both Mercury and Nitro and all seems lost. Finally, Matt is able to tag Jeff in and he cleans house. Things turn around in a big way and Matt hits Nitro with the Twist of Fate finisher followed by Jeff nailing him with the Swanton Bomb (love that move!) off the top rope. The ref counts three and the Hardys are victorious.

Overall this was a good, solid match. While it lacked the star power of the other two, it made up for it with great in ring action. The Hardys never disappoint!

Teacher’s Note: Interesting take here this week, you strayed from the pack with your analysis of Tully Blanchard. I think there may be more Horsemen matches in your future. However, next week we prepare for your return to the Place to Be Podcast Monday Night Raw Live Watch!