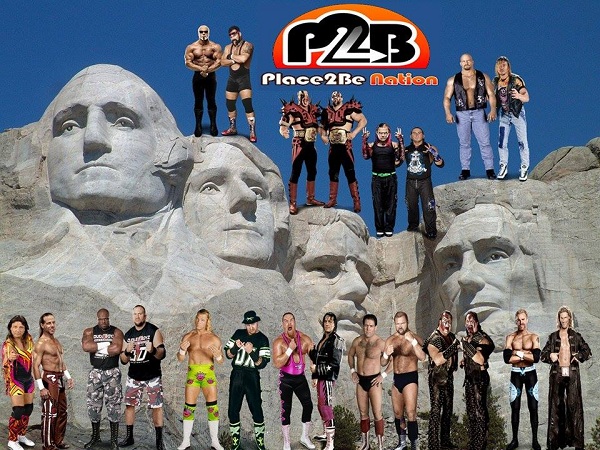 Mount Rushmore — that iconic image of stone faces looming large in the South Dakota sky. It bears the faces of the men often considered to be our nation’s four greatest presidents. However, over the years, the idea of a Mount Rushmore has been tossed about in every genre from film to sports to comics. So, with that in mind, the staff of Place to Be Nation decided to take a crack at constructing our own personal Mount Rushmores of professional wrestling. But, for an added twist this time around, it’s not four faces going up on this hypothetical stone carving. Rather, it’s eight faces, as staff members have selected the four tag teams they would put on their Mount Rushmore of tag teams. Enjoy! 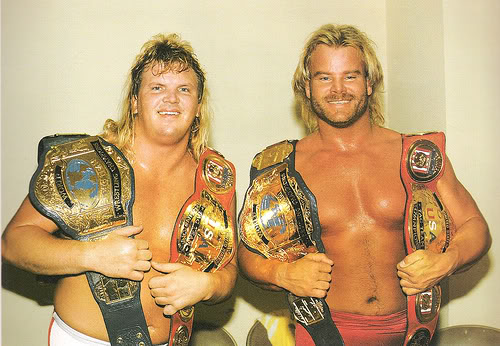 Road Warriors – No team dominated the tag division in any territory like Animal and Hawk did. Two bad ass MF’ers who captured the tag gold wherever they worked.

Dudley Boys – What the Road Warriors did in the 80s and early 90s, Bubba Ray and D-Von did in the late 90s into the 00s. They didn’t just cut heat-seeking promos, but they backed up their words in the ring.

Midnight Express – Arguably the best tag team worker of all is Bobby Eaton. Whether he was with Dennis Condrey or Stan Lane, the Express knew how to tell a story, worked to the style of any team they were working and captured tag gold several times. Along with one of the best mouthpieces in wrestling, Jim Cornette, the team along with their manager was the prefect combination.

Hart Foundation – Being a WWE fan my entire life and growing up in the late 80s into the early 90s, the tag division was loaded and the Hart Foundation were the back bone of the division. Bret Hart told a story, bumped and was just as good a worker as Bobby Eaton. Along with the powerhouse that is Jim Neidhart and one of the best managers ever, Jimmy Hart, the Foundation deserves to make this list. 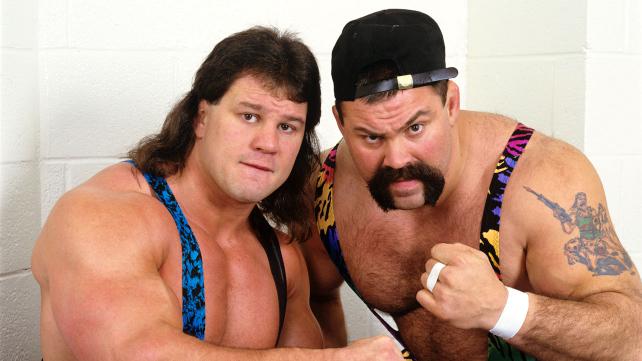 Steiner Brothers – Being from Michigan had nothing to do with this pick. The Steiner Brothers were amazing! Always quick, always brutal, always hard-hitting. They were just fun, fun, fun to watch. Like Vader, everything they did looked brutal (because it was!) and they had the best suplexes in the world before Taz and Kurt Angle made that a gimmick.

My all-time favorite Steiners’ match was probably the matchup with Hiroshe Hase and Kensuke Sasaki. It had everything: suplexes galore (including the Steiner Screwdriver), Steinerlines that broke faces, and of course, the Frankensteiner to end it all!

Midnight Express (Eaton/Lane version) – As I’ve said, I didn’t get into wrestling until late ‘91, and by that time, the Express were no more. But I’ve gotten into them heavily in the last year or so. And I’ve yet to see a bad match. They were amazing: Fast-paced, innovative, and dangerous all-around. The right hand of Bobby Eaton remains my all-time favorite wrestling punch, while Stan Lane’s “Redneck Karate” always gets a chuckle.

And, of course, add in those names for their double teams: The Veg-O-Matic? The Double Goozle? Forget about it!

And I’ve not even mentioned Jim Cornette! I mean, hands down awesomeness.

Hollywood Blondes – A short-lived, but AMAZING team. These guys were first-class heels. They were hated and they loved it. They were bad-ass and they knew it. If you haven’t seen their interviews riffing on the Horseman during the late spring of 1993, stop what you’re doing and find them.

In the ring they were a lot of fun every time out, whether it was their great matches with Ricky Steamboat & Shane Douglas or any number of squashes were they “filmed” their beaten opponents repeatedly, the Blondes were always a “Must Watch” for me.

Favorite move of the Hollywood Blondes: I don’t know if they named their finish, so I’ll just go with individual moves: Austin’s Stun Gun & Pillman’s dropkick

Arn Anderson and ANYONE – With Ole in the Wrecking Crew, Tully in the Horsemen, Zybysko as the Enforcers, or in the Dangerous Alliance with Eaton, there isn’t a tag team wrestler that was more fun than Arn Anderson. He could work well with any opponent and his long list of partners.

He knew how to work a crowd. When to kick ass and when to get his ass kicked. Double-A was the man in tag teams. 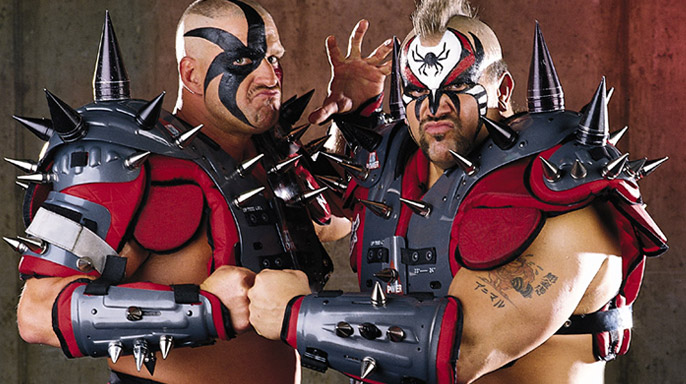 Road Warriors – Anybody who knows me isn’t shocked whatsoever at this. They are the template for a team of pure power who mowed over teams at a legendary clip and became the first team to win the “triple crown” of tag titles (NWA, AWA, WWF). Their quick demise in 1997-98 was sad but definitely not an example of this team’s greatness.

Hart Foundation – The opposite of the Road Warriors. A great mix of power and expert technical know-how.

Four Horsemen/Brainbusters – Any combination of Tully Blanchard and Arn Anderson depending on the promotion. The best heel tag team of all time. 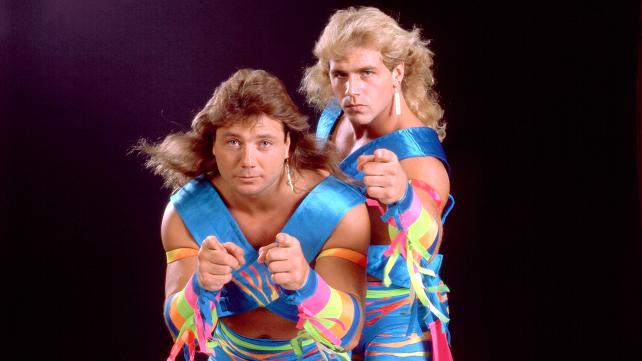 The Road Warriors – Duh. The most popular tag team of all time, the Legion of Doom is one of the most recognized acts in the history of pro wrestling. The Roadies won every title imaginable, had some classic brawls and possessed a unique look that revolutionized the industry.

The Midnight Express – Perhaps the best pure tag team of all time, the Express perfected (along with the Rock ‘n’ Roll Express) the formula that defines tag team wrestling to this day. Whether it was Beautiful Bobby and Loverboy Dennis, or Beautiful Bobby and Sweet Stan, the Midnights always provided great matches with plenty of variety. Jim Cornette was the icing on the cake as the manager.

The Steiner Brothers – Because it’s harder to define “draws” in the tag team division, I went with some of my personal favorites, and not many tag teams had matches that age better than the Steiners. Scott and Rick were absolute dynamite when the bell rang, and I find myself going back to their matches time and time again. Whether tossing 400-pounders like small children or matching the Hart Brothers hold for hold, these brothers deserve a spot among the all-time great teams.

The Rockers – Pure subjectivity here, as the Rockers are my all-time favorite team. The Hart Foundation undoubtedly had more great matches and feuds, as did the British Bulldogs, Hardy Boys and several other teams I considered for this last spot. But even moreso than the Hart Foundation (my second favorite tag team), the Rockers were the one tag team I considered appointment viewing over most of the singles stars. Their matches were incredible, with an unmatched pace at the time and flawless tandem moves. Their sprint against the Hart Foundation on Saturday Night’s Main Event in 1990 might be my favorite tag match of all time. 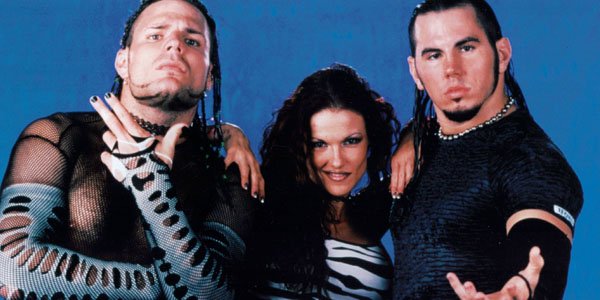 From there, it kind of devolves into personal affinity for certain teams. So, using those criteria, I next selected my favorite tag team from the glory days of the Monday Night Wars – Harlem Heat. They were one of WCW’s longest running tag teams and one of their most popular and successful. Loved all the “heat” themed moves and especially loved the Harlem Hangover.

Next, I went with the team that I felt best represented the Attitude Era of the WWF – The Hardy Boyz. Yes, with a Z, because Z, behind only X, is the second most EXTREME letter in the alphabet. I felt like this thing wouldn’t be complete without at least one member of the TLC trinity of tag teams, and the Hardys were the ones that fans seemed to rally behind the most.

Finally, I decided to go with a team that bought pure entertainment every time they were on my television screen – the Steiner Brothers. There’s nothing quite like seeing Rick and Scott brutalize two poor jobbers. Plus, when they had actual feuds, the matches were almost always very good. Love the Steiners.