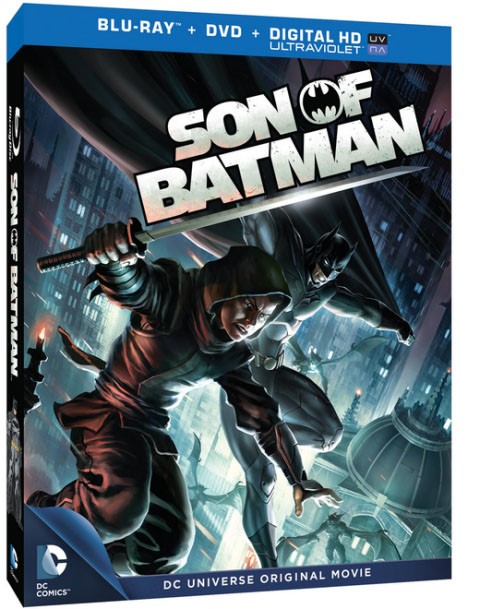 Striking a good balance of freshness and faithfulness is always a touchy subject in comic book adaptations, even when it’s animation.

Luckily, Son of Batman manages to find a mostly workable medium and becomes a more palatable outing for both those who read Grant Morrison’s seminal work and those who didn’t.

This story is in continuity with the previous DC Animated Universe films, Justice League: The Flashpoint Paradox and Justice League: War, though it never mentions either event directly. This is all about Batman finding out he’s been a dad for quite some time.

Much like his introduction in the Batman and Son story arc by Grant Morrison and Andy Kubert, Damian’s first appearance is something of a mixed bag of emotions. On the one hand, fans might be uncomfortable with the idea that Batman fathered a child with Talia al Ghul, daughter of famed villain Ra’s al Ghul, and that he’s kind of a brat.

On the other hand, he’s a likable brat. Much like the character’s progression in the comics, he develops into someone who’s not quite as detestable by the end and even seems to learn some valuable lessons.

The best parts of the film are the action scenes and the animation, overall. This might be the prettiest and most smoothly-animated film in the DC animated collection. While it uses a combination of computer and hand-drawn animation together, the two actually blend almost seamlessly here.

There are plenty of humorous moments, too. The banter between Bruce and Damian flows so naturally you’d think the voice actors were actually related. And Stuart Allan’s performance as Damian was spot-on! He brought actual depth to the character and gave him a voice that fit perfectly. It was like he’d been Damian all along.

Where the movie takes some liberties with its source material is in the inclusion and portrayal of Slade Wilson/Deathstroke. The character wasn’t part of Damian’s origin in the comic story, but his inclusion here isn’t what’s jarring; it’s his actions. His desire to take over the League of Assassins isn’t so farfetched, but there’s a moment when his forces are clearly winning the battle but decides to retreat in the face of an injury. Any other portrayal of the character wouldn’t have been so easily deterred. And he apparently won the follow up battle, which isn’t shown but implied.

Some pacing issues plague the middle portion of the film, but the dialog exchanges keep things from ever getting boring. Sean Maher (Firefly) provides the voice of Nightwing and has some (maybe foreshadowing) funny moments with Damian. As does David McCallum’s Alfred, who expertly times his sarcastic responses to Damian’s demands throughout the film. Hopefully we get more of those two together in future films.

Although, the movie could have stood to be about 15 minutes longer just to give us some more Alfred and Nightwing moments. And what’s with cutting out the fight scene between Damian and Nightwing at their first meeting only to give it to us in still shots during the closing credits?

One other small criticism is that this is possibly the bloodiest DC animated movie ever. If you’ve read comics over the last few years, a little blood is nothing new. However, if you were thinking because this is an animated movie that means it’s for kids, think again.

Overall, the movie is entertaining and often laugh-out-loud funny with some intense action. But the pacing issues and poor voice casting and actions of the main villain do bring things down a bit. As an introduction to Damian, this might be a better overall presentation and more easily understandable version than the Morrison original, but comic purists will likely not be amused. It’s still worth seeing at least once.