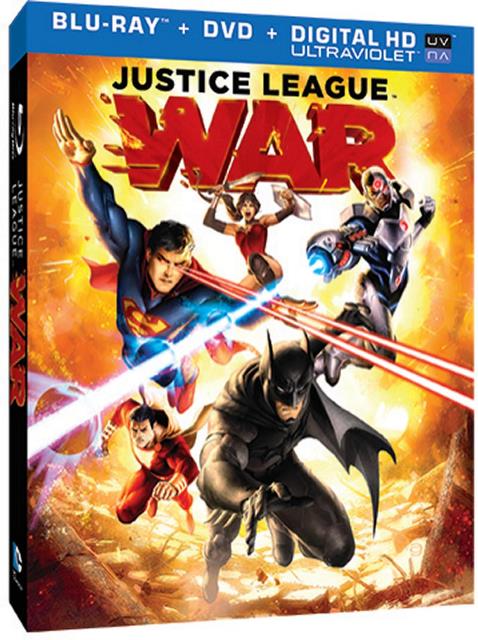 Putting big-name superheroes in the same film is a popular notion these days, but that doesn’t mean it’s easy or guaranteed to work out. Luckily for us, Justice League War mostly pulls it off.

This follow-up to Justice League: The Flashpoint Paradox takes the world of DC’s New 52 Justice League into animation with a mostly-faithful adaptation of Geoff Johns’ and Jim Lee’s Justice League: Origin story from 2011. There are quite a few differences, but most of it winds up being negligible.

For those who haven’t read the story, the gist is simple: Darkseid, probably the biggest bad guy in all of DC Comics, invades Earth in hopes of terraforming it for his empire. His legions of mindless automatons, called Parademons, kidnap people to harvest their “organic material’ in order to make new Parademons. This obviously doesn’t sit well with the relatively new superheroes on the scene and a huge battle ensues.

There’s a lot more subtext and some decent character development peppered in with all the action (which there’s more than enough of), but it’s Green Lantern’s headstrong brashness and Batman’s stoic deadpanning that steal the show. Justin Kirk has all the hot-shot flyboy attitude of a young Hal Jordan while Jason O’Mara brings shades of both Kevin Conroy and Bruce Greenwood, both who’ve had iconic voice portrayals of Batman. Some might be put off by the overly-cocky nature of Green Lantern, but in the context of a young hero who believes he’s untouchable, it works. And despite his more nuanced role, The Flash, voiced by Christopher Gorham, has a tendency to steal scenes.

There are some noticeable changes from the source material that both help and hurt this one, too. We get a bit more backstory on how GL and Batman first meet that makes it feel more organic than the comic version. There’s also a bit more flirtation between Superman and Wonder Woman, voiced by Alan Tudyk and Michelle Monaghan, that’s obviously teasing what might be to come later with future animated adaptations. But there’s a big omission from this story: Aquaman.

Instead of Arthur Curry we get Billy Batson, aka Captain Marvel Shazam, voiced by Zach Callison and Sean Astin respectively. While he and Cyborg, voiced by Shemar Moore, have great chemistry, we don’t get much explanation for how Billy has powers or any real reason to care much about him. The same could be said for Aquaman in the comic version, but his being involved requires much less explanation and would have added a different dynamic to the story. Luckily, there’s a post-credits scene that drops a big hint about what comes next and Aquaman will definitely be front-and-center for that one.

Another positive point is how well done Wonder Woman’s role is in this. While we don’t get enough backstory on her, either, she gets what might be the most bad-ass moment of all the heroes. When she takes on a hoard of seemingly endless Parademons on Air Force One, it’s a truly epic moment for her. But, she also has some great character moments, too. When she dresses-down an angry mob and a little girl introduces her to ice cream are taken straight out of the comic and are done perfectly. Even Geoff Johns’ dialog is largely preserved!

Much like the comic, once the action starts it pretty much doesn’t stop until the end. Unfortunately, that means not much development for Darkseid, voiced by Steve Blum, and his minions. While he poses more than enough physical threat to all of them, we don’t get much in terms of his motivations, why he does what he does or anything explaining how he’s a New God. Truthfully, that hasn’t been explored in the current comic story lines, either. It’s all very spectacular to watch, but it lacks a certain amount of depth that would make this movie truly soar above just about all others.

As an entry point, Justice League: War might leave the comic book uninitiated with more than a few unanswered questions. Hopefully there will be better explanations of certain characters and concepts in future films, especially for Shazam and Wonder Woman. As a start for the new DC Animated Universe, it’s a lot of fun if a bit flawed. If you enjoyed Geoff Johns’ and Jim Lee’s first Justice League story arc, you’ll love this. If you’re a new fan, give it a shot and you might just find yourself heading to your local comic shop to get caught up on Justice League.