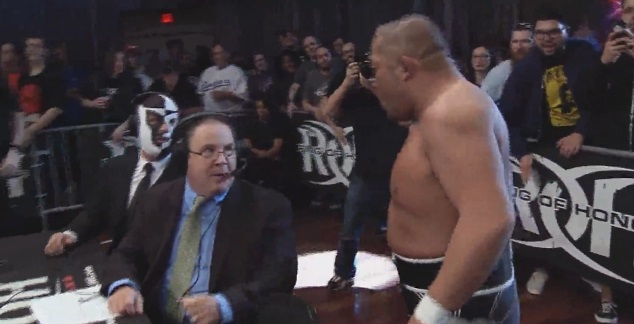 ROH Nation! Welcome to another Ring of Honor television recap. Let’s get those ROH-centric plugs out of the way:

Veda comes out with a financial offer for BJ to give his title shot to Cedric Alexander. Rather than face The Stone Pitbull, BJ wisely takes the check and we get Alexander in the match instead. I like that Ishii just stands in his corner with a “what the f is this” look while this all goes down.

I thought maybe we’d get the Honor Rising shows before this TV block, but KK explains why Ishii has the TV belt here. Ishii encourages Cedric to really smack him and in turn chops him in the throat. Veda cuts him off by grabbing his leg off the ropes and Cedric takes over, amidst strong “Ish-ii!” chants.

Ishii eventually has enough of Cedric slapping on a headlock and smacking at his head and decides to hulk up, LEANING INTO Cedric’s forearms before walloping him back. Huge pop. Chops, shoulder block, suplex gets two. Cedric spingboards out of the corner with a spin kick and drives Ishii down for two. Ishii ducks a kick and hits a monster headbutt. Camera picks this up perfectly and the slap makes it sound so vicious. Ishii goes for the sliding lariat but Cedric reverses into a cradle and then is up like head butt never happened. That headbutt should have played right into the finish. Cedric manages to kick out of a big lariat, but then Ishii nails the brainbuster for the win. Good little TV title match and a nice showcase for Ishii on ROH TV.

Kevin gives Ishii a thumbs up and let’s him know he’s the man after he comes up to the table post match. This may be my favorite part of the entire show.

The Addiction are out to address the Motor City Machine Guns re-uniting. Pretty good stuff from Kaz here. This goes on for a good bit before the Guns come out. Big “Motor City” chant. Really good segment overall.

Next week we get Jay Lethal defending the title against Hirooki Goto.

Reno Scum vs. The Briscoes

Mr. Wrestling III (I really miss being able to just say “Corino” and not have to type this out) notes that Reno Scum is well known on the regional wrestling level and then questions if they were a part of the Scum that was in ROH years ago. Fun stuff.

Commentary is focused here on the budding Briscoes vs. War Machine program. This one is way more than the competitive squash it may look like on paper. Nice double team moves from Reno Scum. Jay is just vicious with his dive to the outside. RS does a german into a double stomp on Mark for a close fall that Jay breaks up. The Briscoes prevail as expected in a perfectly fine match.

We get a quick Dalton Castle promo noting that in three weeks we’ll have the Castle/Silas blowoff. THREE WEEKS! 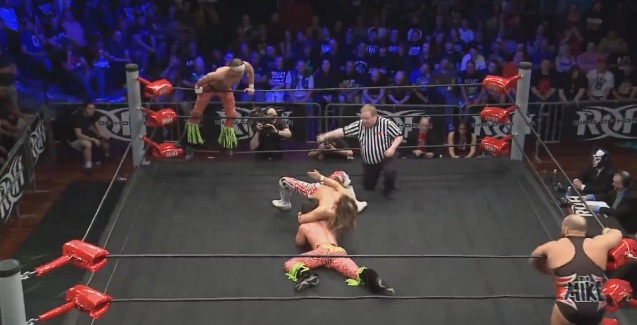 The Young Bucks vs. Michael Elgin and Hiroshi Tanahashi

Huge pop for Tanahashi. Big Mike apparently told KK that both he and Tanahashi are ALSO interested in being in the tag title mix. Lot of depth there already. Good amount of TV time remaining for this one. Elgin wants a test of strength with Nick. The old eye poke into a headlock works here for the Bucks. Elgin gets tossed and Tanahashi gets kicked off the apron to set up a huge twisting senton dive over Matt by Nick.

Back from a break, Tanahashi is muscling Matt around and the he and Elgin do a stalled suplex on him, which honestly looks weird given how small Matt is in comparison. Elgin usually does that alone anyway. We get some good shtick now as Tanahashi gets to throw a fierce “SUCK IT” gesture. Elgin eventually suplexes both brothers at the same time as his team keeps control.

Tanahashi grabs Matt in an abdominal stretch and plays “human air guitar”. He escapes and fights for a tag but Tanahashi grabs a cross face and then fires off another crotch grab at Nick on the apron. Matt eventually fights out and rolls through to make the hot tag and Nick clears house with dropkicks and eventually a sweet moonsault into a DDT on Big Mike outside.

I’m liking this much more on second watch here. Swanton on Tanahashi gets two and he tags in Elgin. Big Mike eventually gets both brothers up and hits a fall away slam in a nice spot. Nice standing suplex from the turnbuckle into a big falcon arrow by Elgin. Superkick for Tanahashi, Bucks go for More Bang for Your Buck but Elgin slips out and escapes but not before another superkick on Hiroshi. He shrugs that off immediately with some old fighting spirit and clothlines Matt inside-out. More superkicks, one for Elgin who shrugs it off also and then a double kick on Tanahashi. They call for the Meltzer Driver, but Elgin catches Nick and powerbombs him. Tanahashi fights out, and hits the Sling Blade on Matt. Elgin then dead lifts him up for a powerbomb and the High Fly Flow finishes a really fun main event.

Final thoughts: This is the best main event on TV since I’ve started up our reviews. It’s nice to get things back on track story-wise post the 14th anniversary PPV (that was a month ago). Quick and easy watch.