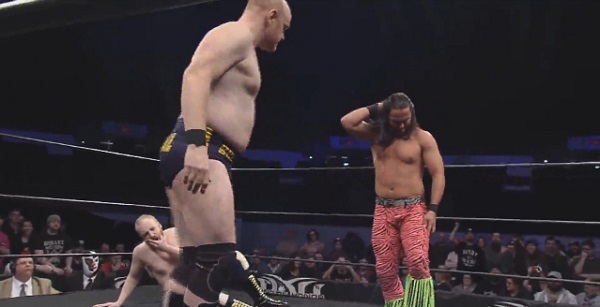 ROH Nation! This week on Ring of Honor Wrestling Television is a TAG TEAM GAUNTLET match, scheduled to take up the entire show. Our man KK does note it’ll be for the entire hour, although I really do like when he channels Gordon Sollie and talks about how other matches have been booked in the event the main event ends early. Maybe my favorite commentary touch in ROH when he breaks it out.

So as gauntlet matches are want to do, this is two teams facing off with the winners sticking around for the next team to come out. There are seven teams in total here – a nice show-long focus on ROH’s deep tag team division.

If you’d like to hear more about this episode of ROH TV, be sure to check out the most recent This Week in Wrestling Podcast – right here at Place to Be Nation!

reDRagon vs. Caprice Coleman and Will Ferrara

The mystery of whatever Prince Nana wrote on these notes that inspired Ferrara and Coleman extends on. Ferrara channels Triple H with his posturing and mannerisms on the turnbuckle. He brings the energy in this one and works his ass off when he’s in the ring. Caprice with a somewhat tepid tag and overshoots Fish on his dive to the outside in a spot that looks like it hurt Bobby. Ferrara takes his own big bump out of the corner and over the ropes to the outside. Double submissions by RD and Ferrara (w/ a bloody mouth) taps.

reDRagon vs. The House of Truth

Truth Martini is out with Joey Daddiego and his new HOT tryout Chris LaRusso (?). LaRusso has a karate and legal background apparently. And a bad haircut I should note. I love Truth, but it still seems odd having your World Champion surrounded by such inferior guys. Maybe that’s the genius of it, since with no cool heels, no one is going to cheer this group. How about Punisher Martinez though as a future HOT member?

The crowd, at the end of a lengthy TV taping here, is just DEAD for this entire thing. Although I can appreciate the “Bye bye Beiber” chant at LaRusso after the House ditches him over a miscommunication spot. DDT into a submission by O’Reilly and LaRusso’s time is over.

reDRagon vs. The Young Bucks

Business officially picking up now baby. It’s nare impossible to break this all down without going three full paragraphs of play by play. This is clearly the highlight of the show so far, crowd even comes alive for a bit. The fatigue on reDRagon plays to the Bucks advantage here as they pin O’Reilly after More Bang for Your Buck.

Mr. Wrestling III joke around about Tim Hughes and Brutal Bob being related. The tough guys stooge around outside before eating stereo super kicks with the bell finally ringing. They get another dose of kicks outside before Hughes heads in and shows off his strength with his smuggler suplexes on both Jacksons. “Like a slow motion car wreck” says KK and he’s not wrong. Pretty sure Nick is cracking up while Tim screams carrying him in circles. Bob comes in with kicks to the shin and quad with Matt asking “What the hell was that?” Best spot of the night I’m going to guess. More superkicks and then the swanton while Hughes is held on the ropes for the win. Yes, I wrote more about this than the previous matchup. It’s just so good.

The Young Bucks vs. The Addiction

The Addiction attack from behind and off we go. Some general mocking here by the Addiction, but Kaz takes a superkick on the outside. Daniels goes for a fast Angel’s Wings but eats a superkick and is then is pinned with a jack-knife cover. Whew, that was barely a minute.

The Young Bucks vs. Roppangi Vice

RV come out and end up mixing it up with The Addiction before the refs get Daniels and Kazarian out of there. Here’s your TV main event with the winner here getting a tag team title shot. Nick takes a flying knee from Romero while on Trent’s shoulders outside. RV obviously fresh here and it shows. Romero is great. We’re back to working an actual tag structure after the last two matches and Matt gets the hot tag and hits a huge moonsault to the outside.

To the finish, Trent makes a tag while Romero is being set up for More Bang for Your Buck. Romero gets his knees up on the 450 splash and Trent runs in to flip Matt off the top rope. He lands on his feet but his super kick is caught right into Strong Zero for the RV win. Slick finish.

To put over the NJPW guys being on the next couple weeks of TV, with the couple minutes of TV time remaining we get the ending of the Briscoes vs. CHAOS tag from last year’s War of the Worlds.

Final thoughts: The ROH tag division is typically stacked but to accommodate ANX already facing War Machine at the 14th Anniversary, and with the Briscoes not participating here, we mix in some comedy and storyline advancement between the heavy hitters facing off. Bucks and RD earned their money with lengthy performances.