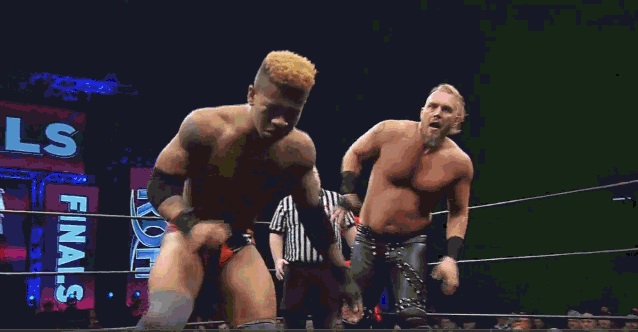 ROH Nation! We’ve had some great Ring of Honor coverage here at Place to Be Nation over the last week. Be sure to check out Pete, Johnny and Timothy break down the 14th Anniversary Show and talk ROH TV on the latest This Week in Wrestling. The Voice of Ring of Honor, Kevin Kelly, welcomed Cheeseburger to The Kevin Kelly Show this week! Finally, in a related (but not on PTBN – yet) note, an interview with Joe Koff by Sports Illustrated is definitely worth your time.

Last week I commented how it would be impossible to surpass the awesome semi-final Punisher Martinez/Lio Rush tilt, BUT this final was built to have a lot to offer layout-wise and I think they delivered a really good encounter. Fury has won twice in fairly short matches and used his “veteran guile” (KK phrase) to win both. He’s ratchets up the dickhead heel stuff here to build off that. He throws a great cheapshot elbow in the corner and a heckuva headbutt during a strike exchange. Rush hasn’t had a chance to show a lot of offense so far in the tournament. His match with Kincaid was very good, but he worked underneath for most. Against Punisher Martinez his offense was all but negated as they told a great story. Here Rush gets to show much more and Fury is a veteran that keeps it all together.

The nearfalls are believable here – starting with the big spinning DDT by Rush. Fury’s size advantage lets him really power Rush around which helps Rush’s comebacks look great (just like last week), especially the huge frog splash. Fury’s cheating escalates when he reverses a sunset flip and grabs the rope for leverage on the pin. The crowd is audibly upset at the chance Fury could win like this but Todd Sinclair channels Tommy Young and kicks his arm off the ropes into a Rush pin that Fury just beats out. Exciting stuff.

That sequence leads right into Fury finally hitting the pop-up powerbomb for another big nearfall. Crowd is amped now with a big “ROH” chant. Fury blocks Rush’s O’Connor role but turns right into the Spanish Fly for the win. They didn’t spam finishers or kickouts here, everything escalated really well. And you have to remember Rush had both of these matches the same night! Great finish to the tournament.

No, not the Kongo you may have heard of from the Southern Indies. This one is purportedly from South America, and is an 80’s throwback gimmick. Moose’s entrance video is synched up to make sure everyone knows when to say Moose and do the arm pump thing (scientific term).

So Kongo gets more offense in than you would think here but Moose is super over and the crowd is into him the entire time. Future champ at Final Battle? That’s my bet.

Interspersed on the show are multiple promos for next weeks Tag Team Gauntlet. That will be the last TV before we get Honor Rising episodes.

KK shares footage of our man Cheeseburger palm striking Mike Posey and his clique pre-show, including a very aggressive female wrestler who challenged him. Cheeseburger’s interview with us includes him breaking down his favorite 90s Japanese feuds.

This doesn’t happen as Whitmer is out to beat on Page with Jonathan Gresham making the save. That tag match is on the 3/12 Philly show.

Silas Young is on commentary because, in his words, Christopher Daniels asked him and supposedly really is a fan of his commentary. He has security with him also, just to make sure no one messes with him or interferes. The Silas commentary is a focal point and it gets a tad repetitive.

Mr. Wrestling III questions how Daniels is back from his suspension while Steve Corino sits at home? KK quickly quips that Corino’s return would cost III his spot so he agrees to keep him home. Fun stuff. Other commentary highlights include Silas’ manifesto on why you shouldn’t have friends.

Pretty fun ending with Dalton taking a great bump off a missed charge into the corner and over the ropes to the outside. He fights off Kazarian and hits his rana from the apron on Daniels. Daniels gets a wrench but one of the boys blocks him and then feathers him in the eyes. This looks to set up the bang-o-rang but Kazarian grabs Dalton’s feet so he can’t get the move off. Daniels hits Angel Wings for the win.

Silas crows that Castle can’t beat anybody. Good promo to close the show with Castle lamenting that while he wants all the belts in the world, he can’t do that with so much focus on Silas. Castle is tired of this crap and challenges Silas to a FIGHT WITHOUT HONOR, which the crowd and announcers erupt for.

Final thoughts: A great wrap to the top prospect tournament and an enjoyable main event make this episode an easy watch.