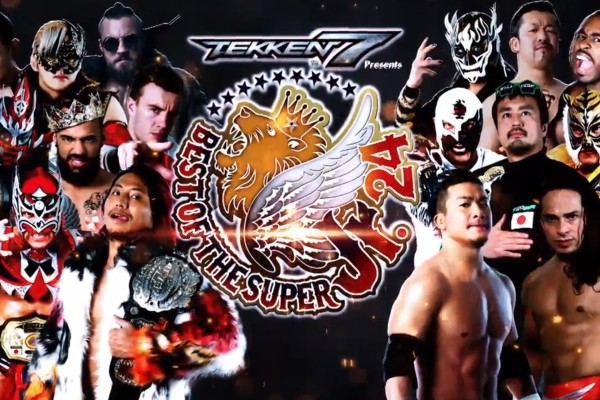 On this, the fourteenth day of the tournament, we arrive at the final. KUSHIDA faces Will Ospreay, and the winner will claim the title of Best of the Super Juniors and earn themselves a shot at Hiromu Takahashi’s IWGP Junior Heavyweight Championship. Elsewhere, a card made up tag matches should give us some added hype and detail for next weekend’s Dominion.

A typically solid showcase for the young lions. Oka and Kitamura have a good thing going on, while Umino shows plenty of fire despite some rough patches. I’ve not seen enough of Yagi to get a sense of his potential, but overall, including Kawato, they’ve got a strong and varied crop of trainees coming through. Nakanishi, bless him, looked like someone needed to oil his joints, but it has been a while since he last appeared. In the end, despite his best efforts, Yagi submitted to Oka’s Boston Crab. **1/2

Speaking of Kawato, the kid is over and, to his detriment, he is keen. The poor lad was on the wrong end of an exchange with Ishii and then Yano taught him some of the tricks of the trade. Makabe came in to no-sell and put himself over, then Kawato demanded to be tagged in again. Makabe obliged, and he managed to take Ishii off his feet! He even scored two-counts off a springboard dropkick and a school boy roll-up, but Ishii lariated him out of his boots for the win. **3/4

Great reaction for Liger, unsurprisingly. Desperado and Volador started with a very nice sequence, then Liger got a Romero Special before Suzuki-gun bent to rules to get on top. Liger’s Shotei allowed the tag to Tiger, who scored a Tiger Driver on Kanemaru, then it was over to Volador again. Taka, the legal man, was caught up top, and Tiger and Liger ensured Volador was able to hit the Spanish Fly for the win. Perfectly acceptable wrestling, with a pleasing win for the babyfaces. I hope this isn’t the end of El Desperado in singles matches, because the guy has proven he has lots to offer. **3/4

Something I’ve enjoyed about the various iterations of this match over the last few weeks is the strict delineation of size and strength, e.g. Hanson can manhandle just about everyone but Fale’s too much for him. ACH was plenty over here, and was keen for War Machine to throw him outside onto Bullet Club, but the plan was foiled and he was imperilled for much of the match, although he did later manage to floor Fale with a suicide dive. Tama took a camera from the crowd and took some photos before handing it back politely, then towards the end, Hanson launched himself off the top-rope onto a group of guys on the outside! Finlay, who was been on the wrong end of pins throughout the tour, was spiked with Yujiro’s Pimp Juice DDT for the three-count. I’m looking forward to War Machine vs. Guerrillas of Destiny next weekend. ***1/2

In amongst the Suzuki-gun cheating, and there was lots of it, it was good to see Yoshi-Hashi get some of the spotlight. Depending on what happens with the NEVER belt at Dominion I would gladly see him and Minoru Suzuki go at it. Anyway, he was on the back foot for the most part, but made the tag, and we got a confrontation between Goto and Suzuki. I’m hopeful the stipulation with add some spice, to be honest. The match ended with Yoshi-Hashi and Taichi going at it, and Yoshi-Hashi surviving five-minutes’ worth of shenanigans to hit Karma for the win, much to the crowd’s delight. Post-match, Suzuki attacked some young lions with a chair, apparently as a form of therapy. **3/4

Coach Taguchi initially had his team running smoothly, but naturally things soon took a turn for the worse, and he found himself at the mercy of LIJ. Luckily for him, Hiromu got a little cocky, and Taguchi nailed a hip attack and brought Dragon Lee into the match. After a quick exchange, Bushi was tagged in and nailed Dragon with a missile dropkick and the mule kick, but was caught with a rebound German and in came Ricochet. He outmanoeuvred his opponents in a flurry of offence, and a standing SSP got two. Another standing SSP, this time off Juice Robinson’s back, also got a two-count, then in came Kojima for some machine guns chops. Sanada caught him with a rope-aided low blow, but Kojima wasn’t having any of the Paradise Lock and hit back with a Dragon Screw. Sanada’s springboard dropkick then preceded all of LIJ rushing the ring and targeting whoever was nearby. Kojima was isolated with legal man Naito, and after a lariat from Evil, Naito connected with Destino for the three-count.

Post-match, Hiroshi Tanahashi came out and stated that he would be fit and ready for the match at Dominion. Fun match as per usual from these two teams and I’ve enjoyed Kojima’s brief stint in Taguchi Japan. Sanada looked good too, I thought, and though he’s been rolling along steadily, a strong showing in the G1 would be most welcome. ***1/2

Okada vs. Omega to start us off, and Kenny flinched on a rope-break before teasing the One-Winged Angel and blocking the attempted Rainmaker with a slap. Scurll came in to “whoop whoops” (which I confess I find annoying) and twisted his way into an arm-wringer and hit the apron superkick. He stomped Gedo’s trapped arm, then he and Omega took turns with double axe handles. They hugged after Gedo nearly tricked them, then Omega used the umbrella to extend his reach and ensure You Can’t Sunset Flip Marty Scurll. Finally, however, Gedo fired back and the hot tag was made to Okada, who ran wild with back elbows and a flapjack before landing the diving elbow and signalling the Rainmaker. Omega blocked, and the Finlay Roll/moonsault combo landed for two, then Scurll was back in. The piledriver was countered to a reverse neckbreaker and Gedo was back, with Scurll hitting the Just Kidding dropkick and would’ve won with the chickenwing but for Okada’s input. Scurll countered the Rainmaker by opening his BC-branded umbrella(!), then Omega snap dragon suplexed Okada from the ring and tied him up with a figure-four. Meanwhile, Scurll snapped Gedo’s finger, the chickenwing was locked in again, and Gedo tapped immediately.

Good, solid tag match, with much teasing of Okada/Omega and the bulk of the work handled by Scurll and Gedo. ***

Best of the Super Juniors 24 Final

Will Ospreay vs. KUSHIDA

Lock up and a rope-break, then an exchange on the mat in which both men had the chance to display their skills. Another even back-and-forth, this time with a brilliant run of missed moves, led to a stand off and we got duelling chants from the crowd! Ospreay invited strikes and they were soon throwing elbows, but Kushida sent Ospreay outside and quickly followed with a flipping senton from the top-rope to the floor! Back in, Kushida opted to target Ospreay’s legs, using kicks before locking in a figure-four. After making the ropes, Ospreay fired back with a big handspring enzuigiri and the Shibata-style corner dropkick for two, then landed a hard kick and suplex to stay in control. The Octopus Hold had Kushida crab-walking to a rope-break, and he turned the tide after blocking the Cheeky Nandos kick and turning it into a diving armbreaker.

The Handspring elbow landed, as did kicks to the arm, but Ospreay fired back and sent Kushida outside before flattening him with a Fosbury Flop! Springboard elbow from Ospreay, overhead kick from Kushida, standing C4 from Ospreay! The standing SSP connected, but a series of counters allowed Kushida to nail the Dragon Suplex for a near-fall. He stomped the arm aggressively, but Ospreay recovered to block the diving moonsault, and landed a rope-hung Shooting Star Press followed by a reverse frankensteiner on the apron! Good lord. Kushida just made it in at 19, but was met with a spiked Essex Destroyer DDT for a near-fall. Ouch. Kushida countered a springboard out of the corner into an armbar, and had Ospreay screaming before transtitioning to a triangle choke, but Ospreay powered him up for a buckle bomb. Counter cutter from Ospreay – two-count only! Corkscrew kick, OsCutter avoided, Kushida with a handspring cutter! Kushida locked in the double wristlock, but Ospreay broke the hold and the strike battle was on! Elbow strike from Ospreay, straight punch from Kushida, both men down.

Kushida brutalised Ospreay with arm-trapped head stomps and went straight into the double-wristlock. He rolled the screaming Ospreay back to the middle of the ring and lifted him up, but Ospreay countered Back to the Future to a stunner! Up top, Imploding 450! One, two, NO! Ospreay psyched himself up, nailed the Cheeky Nandos kick over and over, then set up a diving OsCutter, but Kushida blocked it and nailed a small package driver from the middle-rope! He rolled-through, lifted Ospreay, Back to the Future! One, two, three!

KUSHIDA is the Best of the Super Juniors 24 winner!

I had fully expected Ospreay to win, so the result is a big surprise and it seems like the feud with Hiromu will have a definitive end next weekend. Ospreay is yet to beat Kushida in three attempts, and fails in his ambition to become a consecutive tournament winner, meanwhile Kushida, desperate for redemption, simply would not die. This was an outstanding match that built and built, with both men cranking through the gears towards a thrilling finish. Intensity, aggression, desperation, this had it all and was fittingly the best match of the tournament. *****

They hugged it out, and Kushida was presented with the handsome trophy before thanking Ospreay on the mic and asking for a wave from the crowd. The other babyface juniors were invited into the ring, with special applause reserved for Liger. As has been the case throughout the tournament, Kushida ended the show in a traditional Japanese fashion, then he celebrated in the crowd and confetti rained down to close the show.

Final thoughts: A fun and very watchable show topped with a stellar main event makes this an easy recommendation.

The tournament as a whole was a step up from last year in terms of overall quality and the number of four-star matches. The blocks were mind-bendingly tight and the booking allowed those of us who watched to theorise at length about the scenarios that might play out, even if we ended up with what looked like the most likely final. If you’ve been reading along, thanks for doing so.

I’ll be back next Sunday for Dominion, headlined by Okada vs. Omega and Naito vs. Tanahashi. See you then.