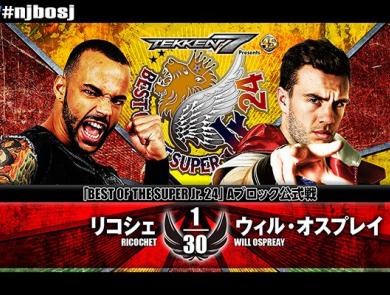 After yesterday’s all-tournament opener, today’s A Block show sees Dragon Lee take on Marty Scurll, Jushin Thunder Liger vs. Hiromu Takahashi, and a repeat of last year’s most buzz-worthy match: Ricochet vs. Will Ospreay. Let’s get to it.

Some news before we get started, as Hiroshi Tanahashi is out injured with a ruptured right bicep tendon, reportedly sustained at the Ring of Honor TV tapings last weekend. He’ll be back in time for his Intercontinental title match with Tetsuya Naito at Dominion. Satoshi Kojima replaces him on the Best of the Super Juniors tour.

A Block – Round Two

Seeing as both men are Suzuki-gun members, they were understandably unwilling to make contact and spent a good few minutes circling each other, twice bailing on a knuckle lock, before eventually attempting – and both failing – some offence. Taichi demonstrated he has a conscience by  not taking the ringbell hammer, then TAKA went low via the middle-rope as Taichi was getting back in the ring. Taichi returned the favour and removed the turnbuckle pad before drawing TAKA into it. He feigned injury after missing a kick, and TAKA wasn’t having any of it, but with the referee distracted Taichi kicked TAKA right in the family jewels and rolled him up with the Gedo Clutch for the three-count.

Post-match fist bump of respect, with TAKA appreciating he’d been had. I honestly enjoyed this. I can’t really rate it as a wrestling match, but I appreciated the story, which was well-executed. N/A

Some tidy mat-work to start, though neither man claimed an advantage, then, after a fair bit of silly business, Scurll stomped Dragon Lee’s arm and sent him outside, hitting an apron superkick before rolling him back in, then inventively tied Dragon’s mask to the ropes and stomped him. Dragon fought back with a German suplex, sending Scurll to the floor, and followed up with a lovely tope con hilo. Back in, after a low dropkick, both men threw elbows, but Scurll got the better of the exchange with a midriff superkick and lariat. Dragon Lee retaliated with a suplex into the turnbuckle and corner dropkick, before putting Scurll up top. Scurll pulled Dragon down with a belly-to-belly, however, and nailed a low superkick for two. After more strikes back-and-forth, Scurll blocked the cradle suplex by grabbing Dragon’s finger then snapping it! Adam Cole’s Last Shot earned a two-count for Scurll. Dragon Lee reversed a charge to the standing Spanish Fly for a quick two-count, then headed up top where Scurll blocked him by grabbing his nose. They both teetered, but Dragon headbutted Scurll into position for the tree-of-woe double stomp and connected with it to put Scurll down for the three-count.

This took a while to get going after the extended nonsense at the start and even then there wasn’t much of a flow, but there was enough good stuff in there to make it a decent match. Styles aren’t always going to mesh in tournaments like this and I felt like that was the case here. ***1/4

Immediate Shotei from Liger for two, followed by a rolling senton from the apron and a brainbuster on the floor! Wow. Liger didn’t want to win by count-out, so threw Hiromu back in, chopping and stomping him dismissively. Hiromu sent Liger to the apron, failing with the sunset flip powerbomb, but succeeding with a powerbomb onto the apron before launching a running dropkick to the floor. Back in, a low dropkick got two and Hiromu cinched in the headscissors before attempting to remove Liger’s mask! Outrageous. Hiromu then licked Liger’s mask, which didn’t please the veteran who then landed a tilt-a-whirl backbreaker to put both men down. Liger Bomb reversed to a ‘rana for two. Another Shotei from Liger and the Liger Bomb connected for a near-fall! Hiromu slipped out of the brainbuster and hit a German, but Liger fired-up and floored Hiromu with another Shotei. Brainbuster! 2.9! Liger signalled a final Shotei, but Hiromu ducked and nailed the Time Bomb! One, two, three!

Liger took to the mic post-match said that these were his last BOSJ matches at Korakuen, and he lost both, but promised to win every remaining match of the tournament.

I loved this. Hiromu’s matches have a frisson like few others and they milked every drop of drama out of this one. All killer, no filler. ****1/4

Ricochet vs. Will Ospreay

Lock-up to start, surprisingly, and Ospreay feinted a slap on the rope-break. Ricochet took charge by working Ospreay’s left arm, with Ospreay near-escaping on a couple of occasions, then a succession of headlock takedowns led to a stand-off. A crazy sequence of missed offence followed (I won’t even attempt to recap it), concluding with a dual superhero pose, then an exchange of elbows put both men down. Hard chops now, then Ricochet caught Ospreay mid-air to deliver a perfect backbreaker. He swiped at Ospreay with kicks before applying a modified Gory Special into a slam for a one-count. A couple more chops from Ricochet had Ospreay crawling, then he pretzel’d him up in an over-the-knee submission before cinching in a seated abdominal stretch. Ospreay’s attempted handspring kick was countered, but it connected at the second attempt after he slipped out of Ricochet’s suplex combo, and the slingshot senton and corner dropkick hit the mark. Kicks from Ospreay, but Ricochet came back with the 619, springboard dropkick and standing SSP for two. Ospreay countered into a tilt-a-whirl DDT for a two-count of his own, then was sent to the floor, but recovered to hit the Sasuke Special!

Back in the ring, the springboard elbow, standing SSP and middle-rope Spiral Tap connected for two. Ospreay landed the stunner reversal after another series of crazy counters, but it had little effect and Ricochet spiked him with a leg-hook Michinoku Driver for a near-fall. Up top, and Ospreay skinned the cat before hitting a top-rope frankensteiner, but Ricochet landed on his feet! My God! Reverse super frankensteiner attempted by Ricochet but now Ospreay landed on his feet! A huge German suplex dumped Ospreay on his head and both men were down. Main Event Elbow Battle time, and Ospreay fired off a combination before being turned inside-out with a clothesline.

Ospreay avoided a dive, leading to another crazy sequence near/on the apron, culminating in Ricochet hitting the suplex combo onto the apron! Crazy. Both men just about made it in before the count. Corkscrew kick and the OsCutter from Ricochet for a near-fall! The Shooting Star Press missed and Ospreay blocked the Benadryller then hit one of his own for a near-fall! Ospreay was caught up top, but managed to set up the Cheeky Nandos kick. Springboard Dragon Rana!!! 2.9! Kick combo from Ospreay followed by the OsCutter! One, two, three!

Post-match show of respect and Ospreay takes to the mic to declare his love for Ricochet. He’ll go through everything – including a House of Horrors match with Randy Orton – to win this tournament again.

Well, that was just mad. An epic rather than last year’s sprint, with a slower start, but an even crazier end. Both men somehow busted out moves I’ve never seen from them before and they made the right choice to do something different and distinct. While I doubt this one will receive nearly the same coverage, I think it was the better match. ****1/2

A Block standings after Round Two

B Block standing after Round One

Final thoughts: You better believe those headline matches delivered. This was top-to-bottom a very enjoyable show ending with a truly spectacular main event.