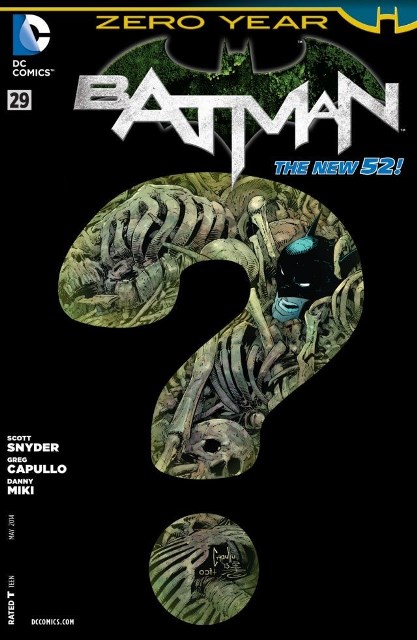 ZERO YEAR: DARK CITY reaches its conclusion! The final chapter of Zero Year is almost upon us, and we’ve saved the best for last! What corners of Batman’s past will be revealed? And how will they impact his very near future? Find out here!

Picked because: As I’ve said before, it doesn’t matter if you know Batman makes it out of this one or not, this is some intense stuff! It’s really the psychological aspect of this story that makes it so endearing to Bat-fans. We had a break from Zero Year last issue to get a peek at Batman Eternal (seriously, go get #28 now!) but it’s time to get back to business. Alfred had a great moment with Bruce near the end of issue #27 that illustrates the difference between justice and vengeance perfectly. But we came for the action in this issue and with Dr. Death’s Riddler connection revealed along with Riddler’s doomsday machine getting ready to unleash on Gotham, there’s plenty to come. Of course, Batman’s got to get out of the catacombs without drowning first. More revelations about Bruce’s past are coming to light with each issue, so expect to see some big ones here, too. Zero Year has a few issues left, but the quality of this story has yet to waiver. And don’t let the price point scare you off, you’re getting an extra-sized issue thanks to last month’s break giving Greg Capullo a chance to draw more pages. 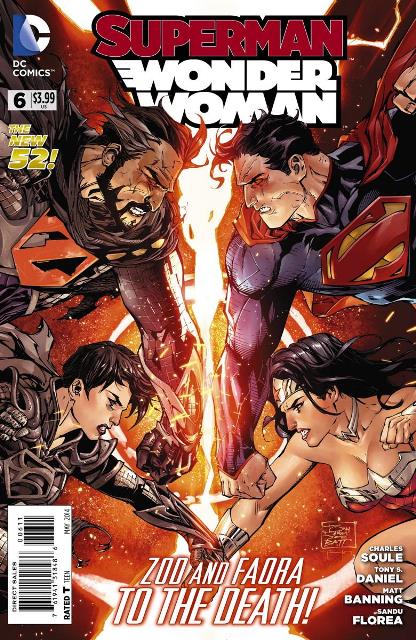 When the Phantom Zone is breached by Zod, Superman and Wonder Woman are forced to do the unthinkable to stop the tyrant from global destruction. But can they do what must be done – and will the world forgive them?

Picked because: The first story arc of this incredible new title comes to a close with the fight we’ve all been hoping for: Superman and Wonder Woman vs. Zod and Faora. Last issue was just a taste of what’s to come, but this one looks to turn that up to 11! Aside from the knock-down, drag-out fight, Zod and Faora are building something that looks like a gateway to the Phantom Zone. The plan is clearly to bring through the Kryptonians still trapped inside to begin rebuilding Krypton on Earth, but it’s not likely to go according to design. Doomsday is coming to the Superman titles, post-Forever Evil, so look for the living embodiment of destruction to suddenly make his presence felt again very soon. 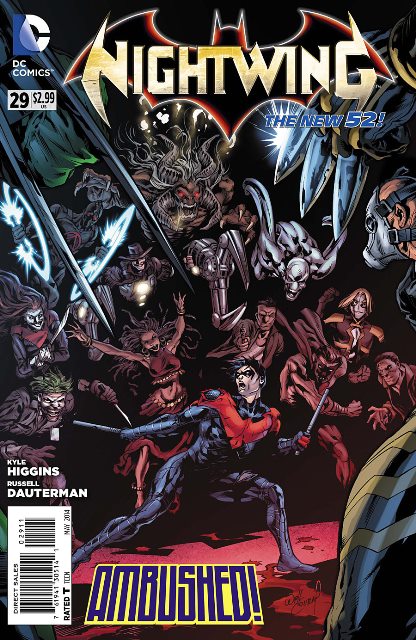 Nightwing #29 – Written by Kyle Higgins
Art by Russell Dauterman
Cover by Will Conrad
$2.99

With Nightwing questioning his purpose, will he be able to stop Mr. Zsasz’s relentless rampage through Chicago? Don’t miss this epic story that ties into the events of FOREVER EVIL!

Picked because: All good things must come to an end. Kyle Higgins’ run on Nightwing has been second to none and could go down as the single best series the character has ever had. Last issue we saw that Mr. Zsasz is ready to make his presence felt and only Dick Grayson can save the young girl who’s life may now be hanging in the balance. Chicago has been such a great setting for Nightwing and it’s terribly tragic to see it all end just as things were really moving along at a good pace. There are lots of story threads we’ll never get to see fulfilled, but we should expect no less than a love letter to Richard Grayson fans with this final issue from Higgins. There’s one more issue of this series to go, but this story (which takes place before Forever Evil) concludes here. Thankfully, Higgins isn’t leaving the Batman Family as he’s moving to Batman Eternal, replacing John Layman. Any Nightwing fan should make sure to grab this issue as we move toward the series finale’. 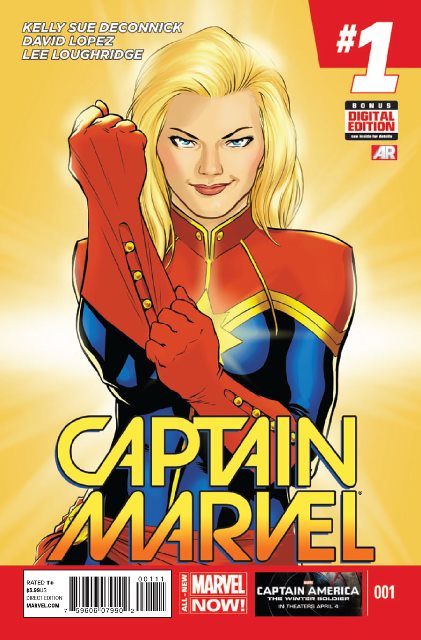 Hero! Pilot! Avenger! Captain Marvel, Earth’s Mightiest Hero with death-defying powers and an attitude to match, is back and launching headfirst into an all-new ongoing series! As Captain Marvel, a.k.a. Carol Danvers, comes to a crossroads with a new life and new romance, she makes a dramatic decision that will alter the course of her life and the entire Marvel Universe in the months to come. It’s time to go HIGHER, FURTHER, FASTER and more in the most super-powered comic around!

Picked because: It’s Kelly Sue DeConnick continuing to write the best female superhero on Marvel’s roster, you should not ignore this. Carol Danvers has spent a lot of time around Earth and being part of The Avengers, but now she’s taking a different approach: heading out into the cosmos! This is a logical step for the character and she’ll definitely find herself crossing into Guardians of the Galaxy territory sooner than later. Captain Marvel’s previous series was one of Marvel’s best and unfortunately suffered from lagging sales. This represents a solid, fresh start for those who missed out before the see why this character is so much fun. The recent slate of Marvel titles set in its cosmic universe have worked wonderfully and there’s no doubt this one will, too. 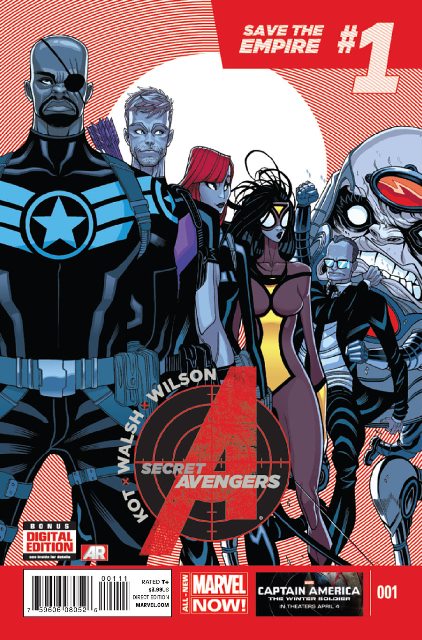 The all-new Secret Avengers are ready to get started. Are they going to be the world’s most effective secret squad? Or will their personal issues tear them apart? U-DECIDE! Three missions kick off at the same time: one in the space, one on the ground…and one in the air. And no one’s ready. Except for the attackers. Russian spa. Helicarrier. Space station. Falling satellites. A hired hitman with nothing to lose. The Fury. WAIT. Yes. THE FURY. Why is Hawkeye still around? And why are these people chasing him? Why are Black Widow and Spider Woman in a Russian spa? Do questions in teasers excite you? RUN THE MISSION, DON’T GET SEEN, SAVE THE WORLD. NOW!

Picked because: Take the fun of Hawkeye, the espionage action of Black Widow and add in what Agents of S.H.I.E.L.D. should have been and you get a recipe for success. This is probably going to be the most fun Avengers title running and that’s something the line sorely needs right now. There are lots of titles with ‘Avengers’ in the title, but all of them are high on action and story, but seem to go lighter on the natural comedy that can come from these situations and concepts. Ales Kot is not the type of writer to ignore such things. In fact, he’s likely to embrace it to the point of it being everyone’s favorite part of the book. But don’t think for one second there won’t be plenty of action and suspense. When dealing with black ops teams, there’s no way to avoid it and still be a solid title. And Kot’s reputation for turning out quality work should tell you all you need to know. Suit up and Save The World! 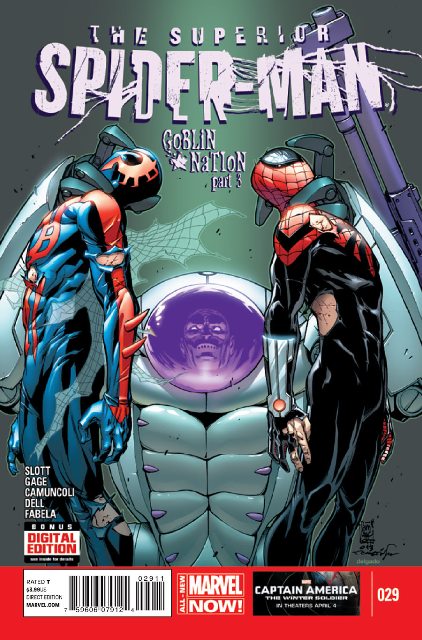 • The Spider-Slayer Squadron were supposed to be under Mayor J. Jonah Jameson’s control…

• …but now they’ve been drafted into The Goblin Nation!

Picked because: Could this be the issue when Otto has his “Gwen” moment? The ending of last issue hinted at that fairly heavily and it would stand to reason that Norman would want to give this “Superior” Spider-Man a taste of real loss. He’s already burned Spider Island to the ground along with Parker Industries. If not for Mary Jane (who was incredible last issue when she used a set of web-shooters to take down a pair of Goblin kids) we’d be seeing another Aunt May hostage situation, too. Spider-Man 2099 has been hanging in the background for a while now, too, but it’s time for him to get back in the game. No way he can stand around while all of these Goblins are burning New York to the foundation. But the real question is: what will Otto do if Anna Maria does die? Seeing something like that would be highly reminiscent of Gwen’s death and could cause Peter’s mind to suddenly leap forward, too. Only two issues left after this one until the series finale’ and the return of Peter Parker. As Peter runs around in Otto’s memories, he’s struggling to hold onto himself and not become more Octavious than Parker. Massive cliffhanger is, no doubt, incoming! 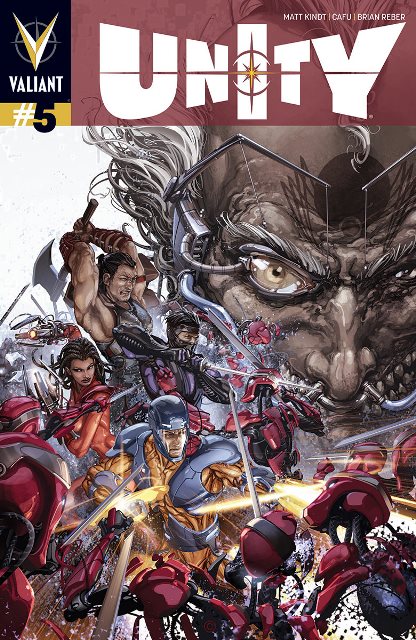 ALL-NEW ARC! START READING HERE! For every action, there is an equal and opposite reaction. First came UNITY… Now meet WEBNET!

Coming off of the earth-shattering repercussions of their first mission, Ninjak is leading the newly formed Unity team right back into the trenches to face the Valiant Universe’s next colossal threat – the enigmatic Dr. Silk and his high-tech terror cell: WEBNET! With the fate of untold millions on the line, can this team of cutthroat heroes uncover Silk’s endgame – and his connection to Ninjak’s shadowy past?

Picked because: DC and Marvel aren’t the only ones with a killer team book. This book has become Valiant’s version of the Justice League or The Avengers. And now, a major villain is coming into the picture. WEBNET is a major foil for Ninjak, so this is going to lead to some great ninja-style beat-downs. Dr. Silk is likely to be the one getting in everyone else’s heads and that’s perfect for his character. He’s easily one of the creepiest villains in Valiant’s lineup. And as awesome as all of that is, CAFU is joining the title on art! His Action Comics run is one of the best of all-time and now he’s working at Valiant. This is a perfect jump-on point for the series and nobody who loves good team/action titles should miss it. A lot happened in the previous story arc, but this is the story where things will get going and we’ll finally see how well this group functions as a team instead of being played against one another. If you’ve been waiting for a moment to check out Valiant, this is it.