I think it is quite fitting that following a week of drunken intimacy on the part of Daryl and Beth, this week’s installment of Hell on Earth would explore the lack of intimacy due to not having anyone to share or connect with. In “Alone,” we are constantly reminded that it doesn’t matter who you end up with; the only important thing is that you have anyone at all with whom to share your hours and days.

The sentiment was expressed two weeks ago by Abraham, the soldier Glenn and Tara have joined up with, albeit with the caveat of similarity in thinking or personality. “Alone” eliminated that though and as we see Bob dealing with being chased by walkers and apparently the ghosts of the strangers he had seen die when the groups he had joined up with dissolved through crisis and death.  Of course, he is dealing with it by trudging through the Georgian wilderness sauced on Nyquil , addiction both an escape and an altogether different demon than the reanimated corpses (or is it diseased corpses?) traipsing through the landscape like the wind or an altogether new element.  Wind, Water, Earth, Fire…..Death?

The idea of having others who you are responsible for as well as people who both literally and figuratively have your back (especially in the fog of World War Z) in addition to the fundamental need for companionship and community is nothing new on The Walking Dead.  Rick woke up completely alone in that hospital and if it wasn’t for the kindness of strangers (Morgan, Glenn, the “Group,” Hershel…) then he would never have made it.  The group of survivors that we have been following came together based on this same common need for security and the strength in numbers that a community provides as well as the human desire to give order to the world of chaos surrounding us.  Like almost everything else that the series has brought up, the need for community isn’t just something born out of civilization, but is the reason for it. 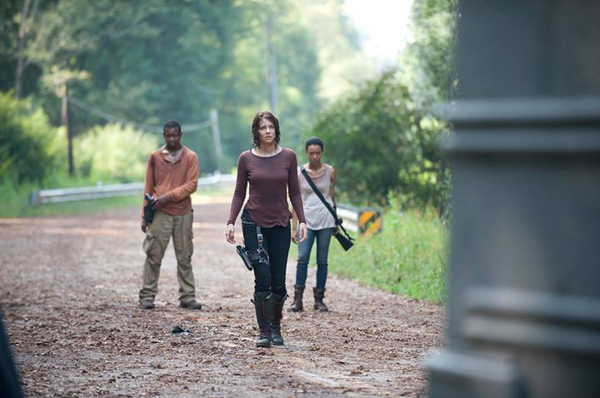 Going it alone is separating oneself from society, and is usually done for selfish reasons although here the motive is selfless and trying to a save another from having to be alone themselves. Maggie leaves Bob and Sasha in the middle of the night so they can adhere to Sasha’s wise plan of heading to the city and getting to higher ground -she doesn’t want to drag them down and put them in danger while she wanders the countryside searching for Glenn (who was willing to do the same for her until Tara, Abraham, and Eugene joined him). Likewise, Bob was willing to leave the safety that companionship (community’s minimum) provided to save Maggie from what he experienced and what the presence of the group and her family had shielded from. Maggie finally gets it and actually waits for Sasha in town…I guess being alone was something she couldn’t stomach for all that long.

Daryl and Beth don’t seem to be concerned about finding others now that they found each other.  Last week had the pair acting out Beth’s adolescent fantasies of drinking moonshine and burning down the country club class-war-battleground they had holed up in and this week found them playing house in a funeral home full of preserved yet lifeless corpses. Their intimate conversation let us in on the man Daryl was before the world came undone, and let us glimpse the psyche of a young woman who had come of age on the cusp of both realities. He reminded us of her weakest moment back at the farm when she had given up on life while angrily chastising her for wanting to get drunk, but through that and their later conversation on the porch, a connection was made. Daryl was just insecure and relatively weak despite how skilled and tough he was. 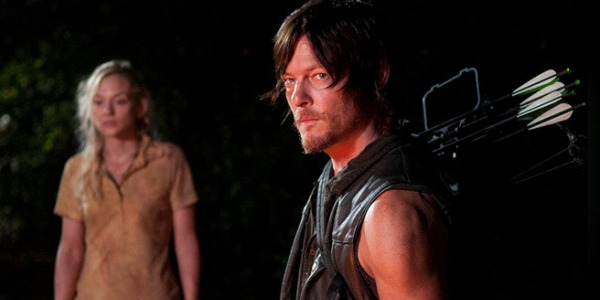 I couldn’t help but see the allusions to a couple newly wed and comfortable; relishing the relative bliss and safety of the home they have taken over. Paradise comes stocked with pig’s feet I suppose.  Due to Beth’s injured foot, Daryl had to carry her around the house, each threshold a reminder and reflection of the love interest that simmers under the surface until even Daryl starts to acknowledge it in a trademark Daryl way: simply a look that is mysterious yet clear enough for a young  girl like Beth to understand .  Even her off-handed comment about leaving a thank-you note for the person who had been living in and stocking the home with supplies  is reminiscent of a couple taking time to thank the people who shared  in their wedding day. Daryl talked of “making it work” with the current or former occupants and the way he yells to Beth to stay in the kitchen while he answers the door (a bizarre occurrence in a time like the one they live in) could be the a perfect picture of the type of young marriage one might actually see in traditional locales like Georgia.

If you stop moving too long though, all beds can easily become caskets (especially when they are caskets), and the honeymoon or spring break or whatever eventually comes to an abrupt ending like everything else in this world. Daryl buys Beth some time to get out but when he finally gets to the place that they were supposed to meet he sees that she has vanished into a fleeing car (in good condition like all cars in the apocalypse apparently). His search leads him to the train tracks which have been crossed by every character by now, but before he can discover the existence of Terminus he is approached by the group of bad dudes that took over the home Rick, Carl, and Michonne had found refuge in. There may be good people in the world as Beth had been saying just prior to their fleeing of the funeral home, but a lawless world means that there are a lot of evil people too. They spare Daryl because even though his skills are clearly a threat to them (though not when they outnumber him – strength in numbers also applies to strength used for immoral reasons) his skills can also be useful.

Just like that, Daryl goes from being alone like Bob from the cold-open flashback scene to basically echoing his statement that it doesn’t matter who they are, as long as he has someone.

And Bob ends the episode alone as he was in the beginning. At least this time, his reason was a noble one.

Next week: All roads lead to Terminus! Is that a good thing? The name seems kind of ominous…