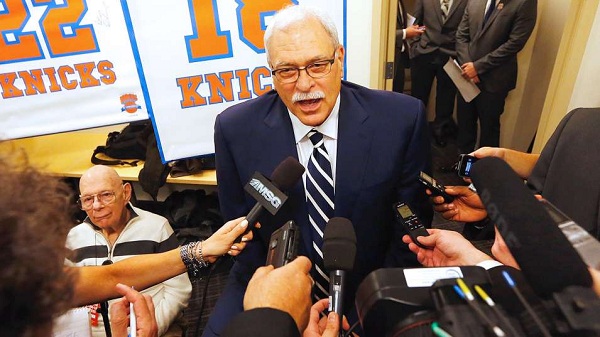 Now that the trade deadline has swooped past us and players looking for convenient buy-outs on bad teams have joined forces with the playoff teams that they preferred, it is onward to the home stretch of the regular season as the playoff race reaches a fever pitch and teams start to either sink or swim heading into the postseason. Let’s play some catch-up ball this week…

The last time we heard 11-time world champion Phil Jackson’s name in the coaching ranks since his retirement in the summer of 2011, it was shortly after Mike Brown’s hasty firing by the Lakers at the beginning of the 2012-13 season. Jackson was being courted by top aides for the Lakers to return to coaching, but he and his agent were proposing some benefits to go with it. Rumor had it that those benefits involved sitting out road trips and some control in basketball operations. The Lakers (and, reportedly, newly appointed owner Jimmy Buss) balked at the offer and hired Mike D’Antoni. It shocked not only the media but Jackson himself, who has since said in interviews that he was blindsided by the decision. Since that occurrence, outside of some corporate-sponsored events, we have heard very little from the Zen Master.

Now comes word that we may see Phil Jackson come back from his fishing trips in Montana (or smoking peyote, as Rick Carlisle hilariously said one time) and pop his head back into the NBA limelight. However, the offer he may accept came after a denial of his own from the New York Knicks. It is no secret to anyone with a brain that the Knicks are in the midst of a losing season only one year after winning a playoffs series for the first time in 13 years. After taking a step forward in 2013, it has all come crashing down once again just as superstar Carmelo Anthony is contemplating his free agency in the summer. Donnie Walsh did a few nice things as the Knicks’ decision maker, but with it came a ton of mistakes that have led to the dumpster fire we have seen this year, a team that is on pace to lose 50 or more games.

Now it seems that Knicks owner James Dolan, considered by many as one of the worst owners in all of pro sports, is ready to make a splash. He is looking to shake things up not on the court this time,  but on the sidelines or at the top of the organization. Reports surfaced last week that Phil was offered the head coaching position by Dolan whenever he wanted it, but the Hall of Fame coach turned it down. Now Dolan has pulled a trick up his sleeve for once that may grant Jackson the one thing he was never allowed to have while he was winning titles in Chicago or Los Angeles: Authoritative control as the team’s president of basketball operations. We have seen this new type of venture not work out so well for great players like Michael Jordan and work out splendidly for ex-coaches like Pat Riley.

It is no surprise that with the offer to run the Knicks (the team that Jackson played for when they won their last NBA Championship in 1973), the legendary coach is finally listening to a suitor after so many wild attempts to woo him in over the years. I cannot even keep count of how many different teams, from the Nets to the Cavs to the Magic, have tried to convince Phil to take over as the head coach when the buried truth all along has been that Phil wants to run the team without the daily grind of sitting on the bench wearing his tired body down. According to reports, Jackson is seriously considering the offer this time. If he happens to accept the job, make no mistake that there will be sweeping changes in the Big Apple for one of the most recognized franchises in the league. We know Mike Woodson is a goner regardless of what happens with Phil, but it will be fascinating to see what Phil wants to do with the coaching position now that he will finally take on the responsibility of shaping an organization from the ground up. Will he do it? Reportedly, we may have the answer by the end of the week.

YOU CAN CALL ME AL

When he was drafted out of high school by the Boston Celtics in 2004, I was always unsure about the prospects of young Al Jefferson. A behemoth high school big man from Mississippi, Jefferson was headed to the University of Arkansas when he decided to go pro like all the other cool kids at the McDonald’s All-American Game were. His first couple of seasons as a Boston Celtic under Doc Rivers were forgettable, but it was in a season where the Celtic tanked hard in 2007 that “Big Al” began to show his potential as a double-double machine. He averaged 16 points and 11 rebounds at the tender age of 22.  The following offseason GM Danny Ainge was able to pull off a trade that transformed Boston into an immediate title contender as he put together a package, with Jefferson as the centerpiece, to send to Minnesota in exchange for Kevin Garnett.

I think everyone in the basketball world will be more than glad to tell you how awful and meaningless Al Jefferson’s seasons for the Wolves were from 2008 to 2010. Still, Jefferson was the key big man for the fledgling team and rarely took games off, punching in a career-high 11.1 RPG in 2007-08 and a career-high 23.1 PPG in 2008-09. After the Wolves drafted Kevin Love in 2008, there was a logjam in the post between he and Jefferson. Both were natural fits at the 5, and then-GM David Kahn did all he could to sabotage both guys by mangling the minutes. Jefferson was eventually traded to the Utah Jazz in the summer of 2010 for two first-round draft picks and Kosta Kuofos.

Unfortunately, thanks to the departures of Deron Williams and Carlos Boozer, Jefferson’s stint with the consistent Utah Jazz was yet another example of excellent individual play amongst mediocrity. He averaged over 18 points and nearly 10 rebounds in his three seasons there, but the team’s only postseason appearance (his first one since his rookie year with the Celtics) was a one-sided four-game sweep from the San Antonio Spurs in 2012. It was clear that the Jazz were willing to flip most of its roster around this past offseason for the sake of rebuilding, and it would start by allowing its two best players, Jefferson and forward Paul Millsap, to sign elsewhere in the summer. Millsap signed with the Atlanta Hawks on a medium deal and went to the All Star Game for the Eastern Conference. Meanwhile, Jefferson was the free agent who cashed in the highest when he simply took the best offer and signed a 3-year, $40-million deal with the lowly Charlotte Bobcats.

It would be easy to laugh at Big Al for taking another step in the annals of NBA bottom feeders, but the truth is that with Jefferson as the team’s star player, the Bobcats are certain to make the Eastern Conference playoffs for only the second time in club history.  The 30-34 record is thanks mostly to Jefferson, who has been on a tear both scoring and grabbing boards after missing the first month of the season to an injury. There was the game on 12/28 against Millsap’s Hawks in which Jefferson had 24 points and 23 rebounds followed by 30 and 16 at Orlando back in January. His coup de grace was on the last day of January when he led the Bobcats with 40 points and 18 rebounds in a road win over the Lakers.

Since the new year, he has clocked in at 30 points or more in a game 11 times and double-digit rebounds 16 times. It was almost fitting that in the game where LeBron James scored his career-high 61 points last week, Jefferson was the forgotten one with 38 points and 19 rebounds, a performance that would have been a top story anywhere had the King not gone off. Perhaps the Bobcats will not do much in the postseason,  but it is safe to say that when the team restores the Charlotte Hornets name next season, Big Al will be front and center as the team’s best player and its best hope at success. One way or another, you’ve got a double-double coming your way.

THE BEST OF THE REST IN THE WEST

I could detail all of the many possibilities going on right now from seeds 3 through 8 in the Eastern Conference playoff race, but it feels like nothing but a race to be the first loser against Miami or Indiana in an otherwise forgettable conference. We shall, therefore, move on to the Western Conference, where the wins are piling up and it is likely that a team with a winning record will miss out on the playoffs. The Suns are looking not to set since the injury to Eric Bledsoe derailed them slightly (Bledsoe is coming back as soon as this week). However, the Suns are now looking like the odd team out thanks to a resurgence and refocus on inside play and defense from the Memphis Grizzlies at 36-26.

Look slightly up at the Western Conference standings, and things get even more interesting. The Dallas Mavericks are currently in 7th place, but are only one game ahead of the Suns, solidifying a three-way race for two teams in that all-important final stretch of the regular season. Unlike the Heat and Pacers puffing their chests in the East, the West is also highly intriguing at the top, where the Spurs have found second (or third, or fourth) life after their annual Rodeo road trip and sit tied with the Oklahoma City Thunder for first place. But the Spurs don’t have to look far in their own division to see the next challenge as the streaking Houston Rockets are at 44-19 and only 2.5 games behind them. The conference is so good that it is likely that the Portland Trail Blazers, the darlings of the first half of the season, and the Pacific Division-leading Los Angeles Clippers might play each other in the first round after garnering more than 50 wins each. I did not even mention the 40-24 Golden State Warriors and their sweet shooting star Steph Curry.

Let’s put it this way: If the 31-31 Minnesota Timberwolves were in the Eastern Conference this season, they would firmly be in the playoffs as a 7-seed. In the loaded Western Conference, the Timberwolves are well back and unlikely to make the playoffs. This feels like the yearly scenario in the early ’90’s when Michael Jordan was devouring the East while the top teams out West took turns running a tight gauntlet to get to the Finals and face His Airness. We do not know if LeBron or Paul George will be awaiting the Western Conference Champion, but barring injury, it is likely that we will see a fascinating postseason involving teams that have been to the dance before. Who knows where the winner lies, but in the ultra-competitive West, you don’t have to look too fair down the standings to find the next contender. I think as fans, we all win in that case.