It’s time to kick off the second round of our tournament, as we return to the Tattooine Region for four second-round matchups. Can Jurassic Park, seeded 11th, pull off another upset and advance to the Sweet 16? Will Star Wars continue its march towards the overall crown? Only time will tell. Before we get started, let’s take a look at what the overall tournament bracket looks like. A larger version can be viewed here. 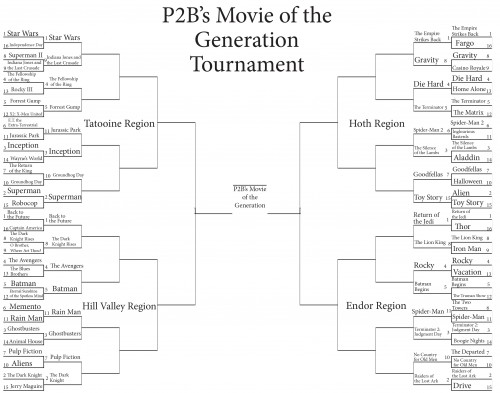 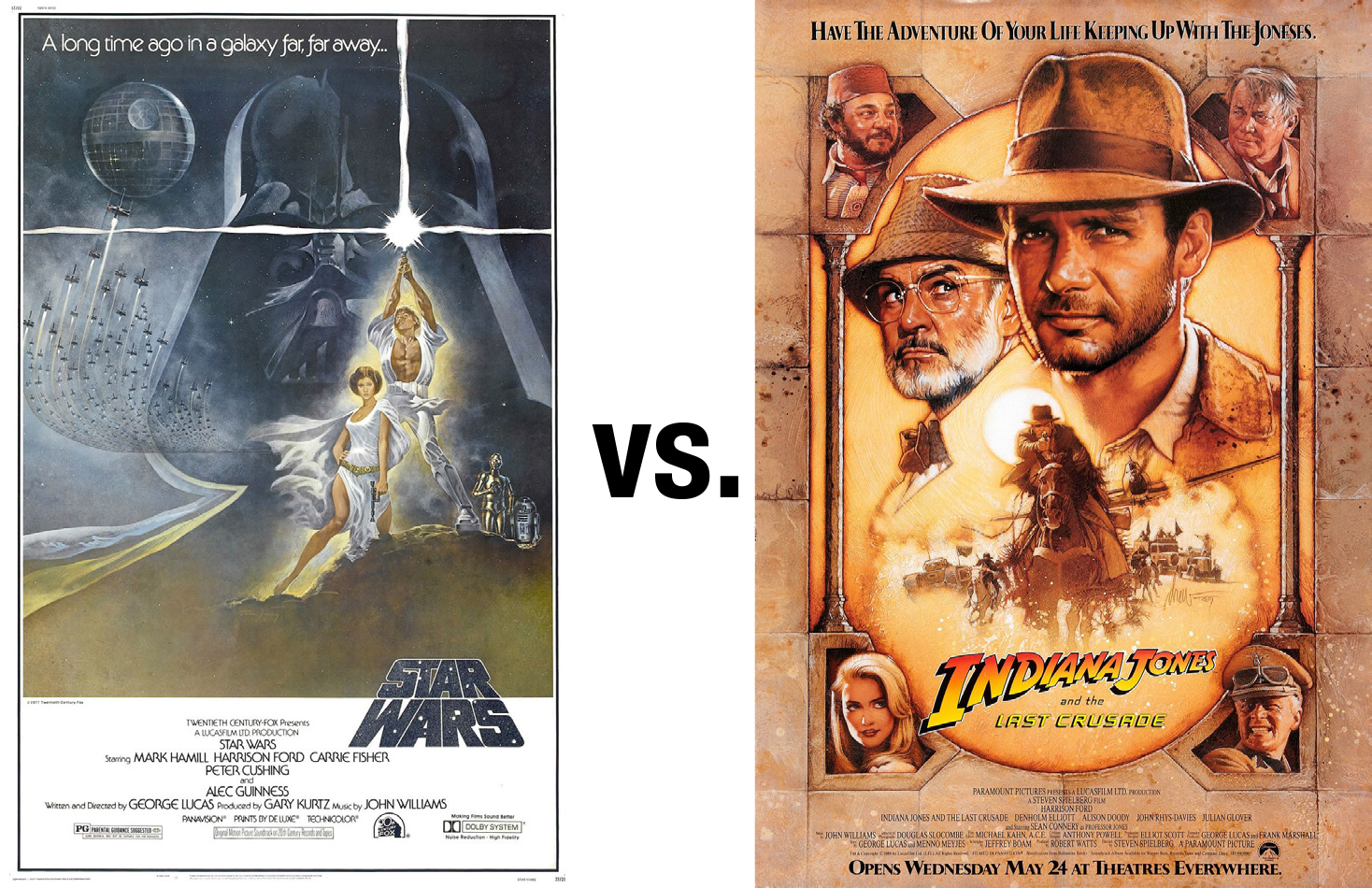 Indiana Jones and the Last Crusade: Finished No. 2 in 1989 with 23 points, ranked by 6 of 10 voters, highest ranked by Glenn Butler, Russell Sellers and Andrew Woltman at No. 1.
Round 1: Defeated Superman II 6-5.

Glenn Butler: Indiana Jones and the Last Crusade is an excellent movie. It features a main cast that’s comfortable enough in their roles and with each other to let loose and make the script’s sillier moments shine. It features the obligatory globe-trotting high adventure, with the mystical edge of the precious religious artifact. It features some nostalgic callbacks to Raiders, a killer score, a father-and-son reconciliation story that transcends schmaltz, and thrilling action sequences.

So almost all of us voted for Star Wars.

Writing something to justify approval of Star Wars in the year of our Lord Vader two-thousand-fifteen feels exceedingly extraneous. For those of us who absorbed it as children (meaning nearly everyone born since the seventies with access to Western media), it’s become a cultural touchstone. As we’ll see in two other regions of this tournament, it’s hard to go up against a cultural touchstone like the Star Wars trilogy, even after the big followup disappointed as much as it possibly could in just about every way that it possibly could. (Ahem.) But there’s always a place for the first movie, with its conspicuous lifts from the aesthetics & energy of pulp serials and the structure of Joseph Campbell’s Hero’s Journey monomyth. It breaks down into an incredibly simple story of good versus evil and the underdog from the backwater come to topple the evil empire, with visual effects boldly pushing the state of the art forward to dazzle the eyes. As much as the effect may be watered down by repetition, homage, and ripoff, nothing can wipe out that first impression. 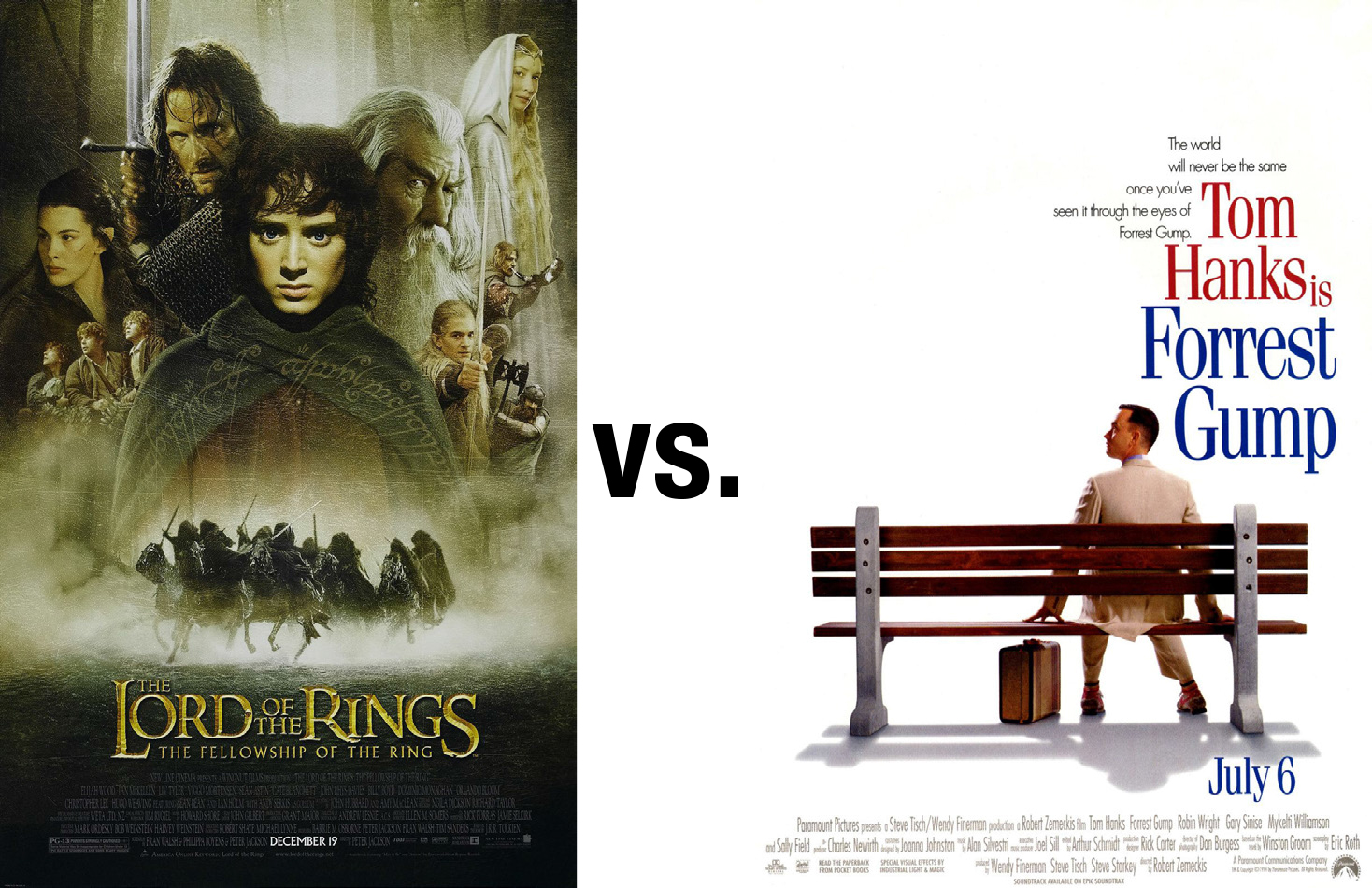 Steve Wille: Here’s the moment when I turn heel on this tournament, likely drawing a “gasp” and a firm shake of the head from my guy, Glenn Butler. I loathe the Lord of the Rings series of films. It stems from a general disinterest of medieval times, including its namesake restaurant where you sip warm decarbonated Pepsi from a chalice. Fellowship of the Ring was probably the last movie I saw in the theater where I felt disappointed that I went (droll children’s movies aside…I’m looking at you, Rio 2). When I told my wife what I had to write about, she laughed, reminding me of the screenplay of the movie: walk, fight, repeat. So unless Fellowship matched up against an unnecessary sequel of an animated feature set in Brazil, it’s a safe bet that my vote was swinging the other way. When I learned that it was up against Forrest Gump, my decision was a no-brainer.

Twenty years later, it’s hard to describe how all-encompassing Gump was in the time’s pop culture. Not only did it garner six Oscar wins, including Best Picture, but quotes from the movie became a part of our national lexicon. If someone states “Life is like a box of chocolates…” people know exactly where it’s coming from, and teenagers, born after the release of the movie, still shout “Run Forrest Run” at my pasty middle-aged body as I’m out for a jog. Gump’s staying power stems from a combination of its crossover appeal: part romantic comedy, part drama, with a touch of history thrown in for good measure. Though Tom Hanks and Gary Sinise are often justly lauded for their performances, I always believed that Robin Wright’s turn as Jenny deserved more attention. Also highly praised at the time was Gump’s monumental two-disc soundtrack that, like the film it scored, took listeners on a chronological journey through rock and roll’s history. Sure, there were some cringe-worthy goofy moments in the movie, but, overall, Gump remains one of the most endearing films of the 1990’s. The Library of Congress agreed, adding it to the National Film Registry in 2011.

Final tally: Forrest Gump 6, The Fellowship of the Ring 4 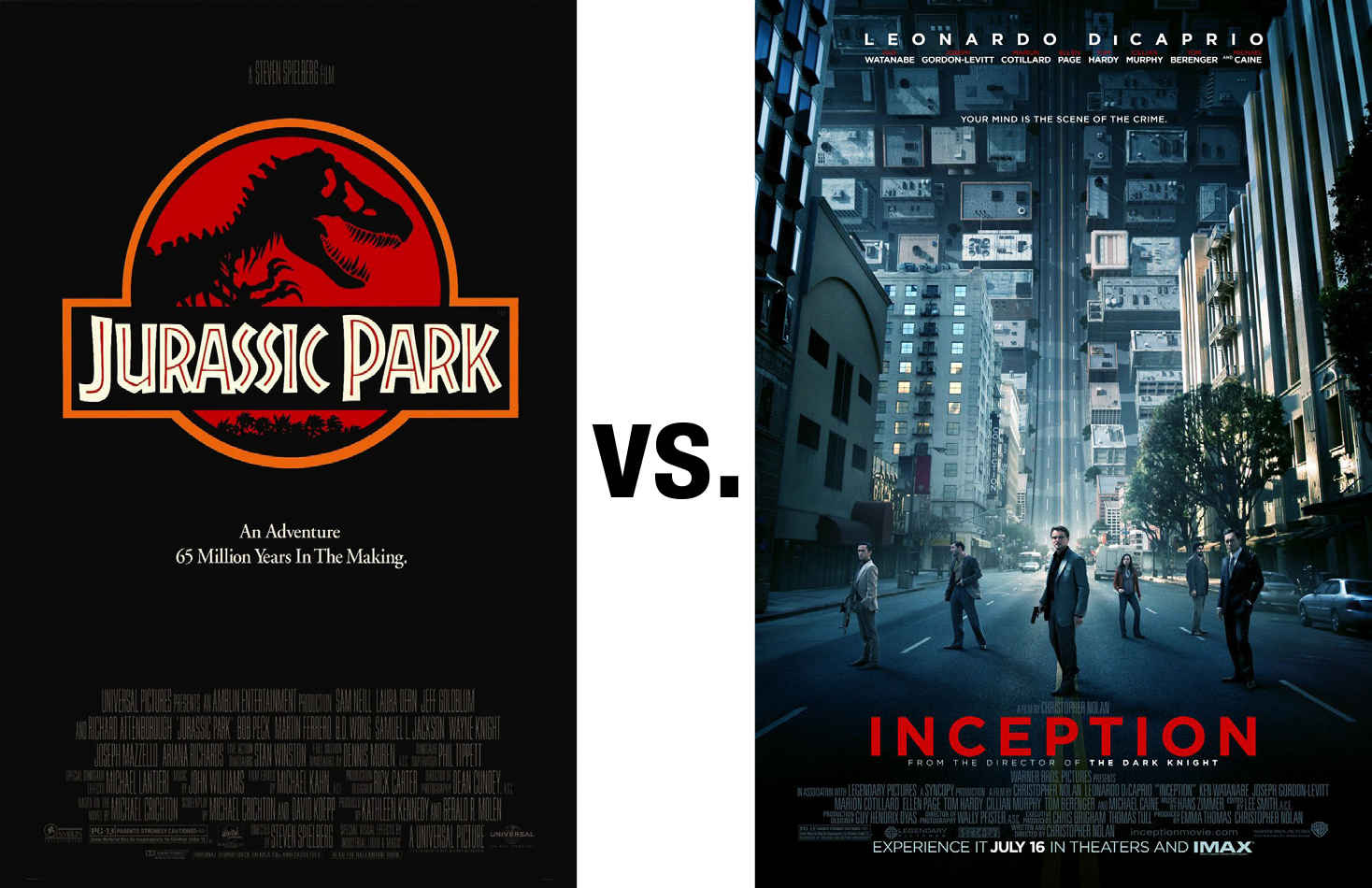 Inception: Finished No. 1 in 2010 with 37 points, ranked by 9 of 10 voters, highest ranked by Nick Duke, Greg Phillips, Russell Sellers, Steve Wille and Andrew Woltman at No. 1.
Round 1: Defeated Wayne’s World 8-2.

Andrew Woltman: Inception was an amazing concept, executed brilliantly. But it does not stack up to the Tyrannosaurus sized impact created by Spielberg’s Jurassic Park. The haunting nightmares first experienced after viewing stem from the enormous power of the film’s impact. He truly spared no expense. 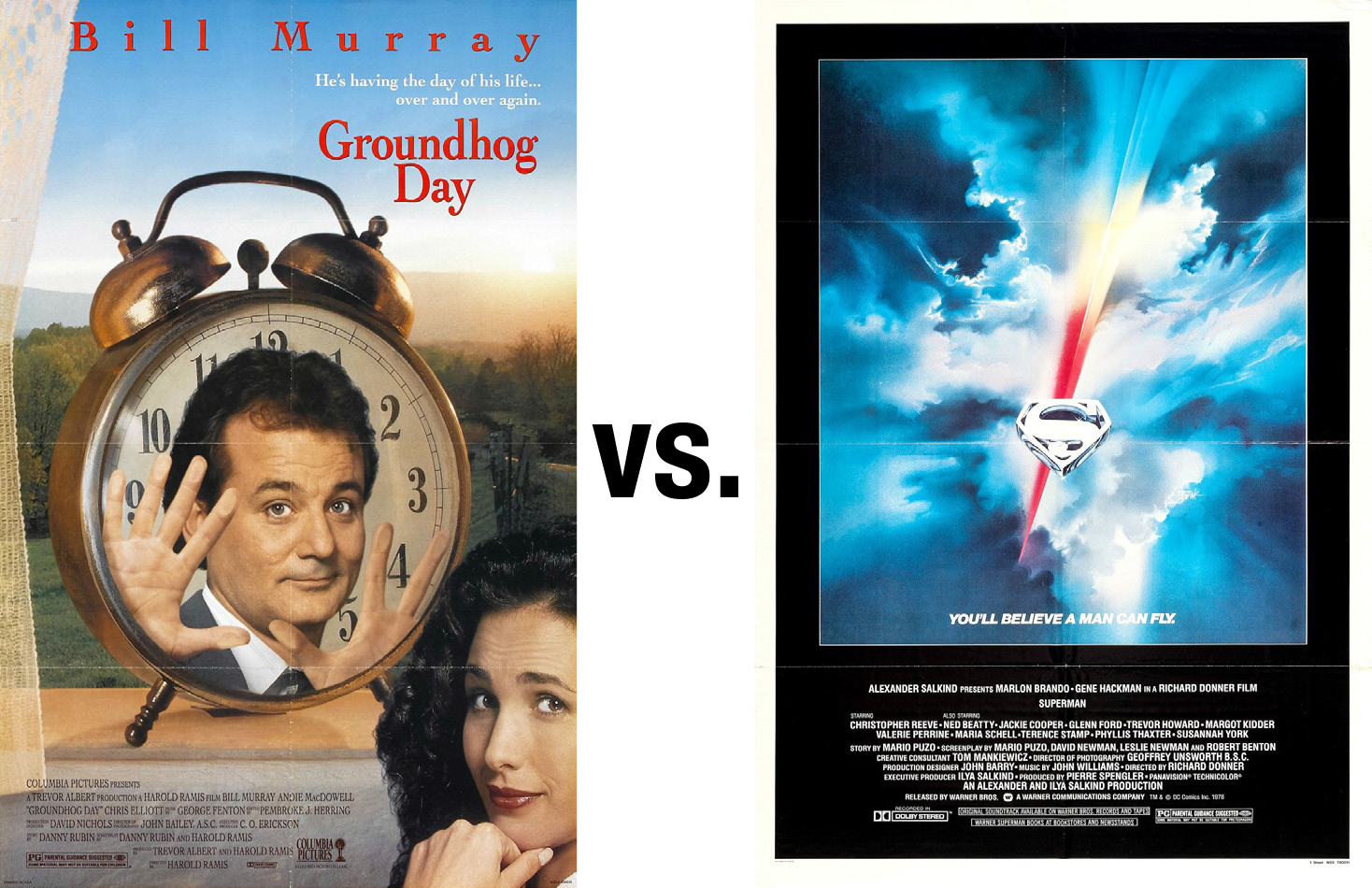 Superman: Finished No. 1 in 1978 with 39 points, ranked by 9 of 10 voters, highest ranked by Aaron George, Greg Phillips, Andrew Riche, Russell Sellers, Steve Wille and Andrew Woltman at No. 1.
Round 1: Defeated Robocop 5-4.

Tim Capel: If I was overly charitable to Groundhog Day in the opening round, don’t count on it being the Cinderella of the tournament with this matchup. Though it pains me to say, the dream is over. Despite having somewhat mixed feelings towards the Christopher Reeve Superman series today, my love for the original is enduring. I can’t make much of a case for any other outcome: Supes bulldozes over the plucky rodent from Punxsutawney.