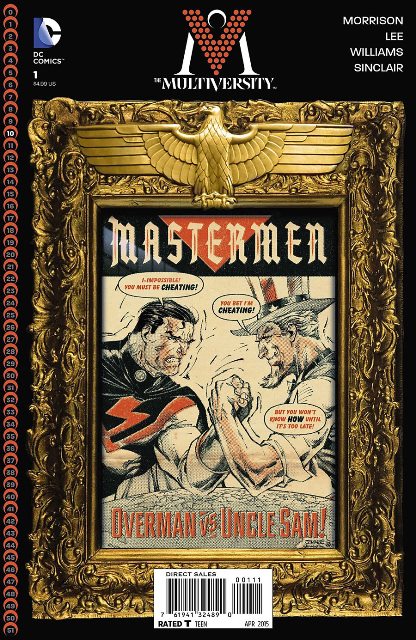 Superstar writer Grant Morrison joins legendary artist Jim Lee on Earth-10 for one of the most dynamic, action-packed issues of this entire world-shattering series – THE MULTIVERSITY: MASTERMEN! Imagine a world where the Nazis not only won World War II but went on to direct world culture for the next 60 years with the help of an orphaned, alien super-weapon known as Overman! But hope is not lost! Rising from the ashes of oppression are a diverse band of heroes raging against the fascist regime – a band of heroes known as THE FREEDOM FIGHTERS! What nightmarish parallel worlds haunt the dreams of Overman? Who is the mysterious figure called Uncle Sam? And when the dust settles, will the actions of Phantom Lady, Black Condor, Human Bomb, Doll Man and The Ray be enough to stop Leatherwing, Blitzen and the other ‘heroes’ of Earth-X? Learn all this and more in this exciting issue that acts as chapter seven of the critically acclaimed MULTIVERSITY storyline.

Picked because: Morrison and Lee together? And it’s actually going to come out? Why, yes I think you should spend your money on this! Morrison’s Multiveristy series has captivated a lot of minds and as well it should, it’s been pure brilliance. I don’t often harp on Morrison’s writing as I find him to be overly pretentious and too steeped in continuity for my tastes, but this series shows him at his absolute best. And how could I turn down an issue drawn by Jim Lee? He may not be able to keep up with a monthly schedule anymore, but when he draws something it’s almost always a homerun. If you loved Superman: Red Son, this might be something you’ll want to see, too. A Nazi Superman vs. Uncle Sam and the Freedom Fighters sounds like something only Grant Morrison could pull off well. 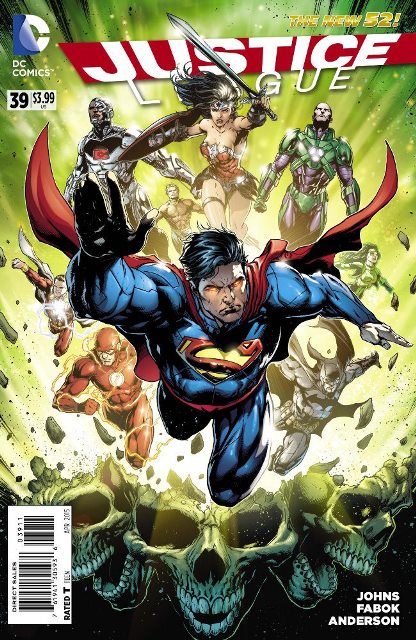 Picked because: This story has been on of Geoff Johns’ best in the New 52 and it’s fitting that it would be the last to use that moniker before the June mini-relaunch. All New 52 continuity will remain, but a stronger focus on storytelling and less on continuity will be the format going forward. Luckily for those who love a continuity-based book, there’s Justice League. This is genuinely THE flagship book of the current DC Universe. And this issue will feature Wonder Woman heavily as she leads the charge alongside Superman and Lex Luthor to take down the JL members infected by the Amazo Virus. That Johns has given the virus a mind/voice of its own has been so well-done I hope this thing make a repeat appearance somewhere down the road. And I can’t say enough about Jason Fabok’s art. This guy is the future of DC and possibly superhero comics in general. His clean style fits so perfectly with this cast of characters and his ability to draw action sequences is second only to maybe Ivan Reis and/or Jim Lee. Yeah, he’s on that level already. And he’s drawing the next big arc, The Darkseid War! Justice League is in good hands all the way around and is definitely not a title to be ignoring. 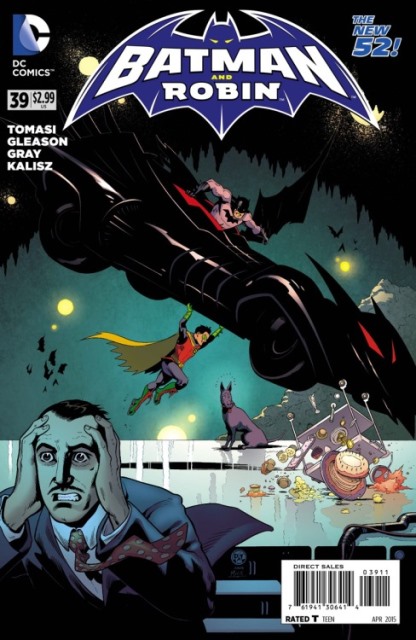 Has Damian Wayne become something more than human? And how do you control a reckless child who now has super powers?

Picked because: Damian takes his new powers for a solo spin and puts some of Gotham’s C- and D-list villains on notice by taking them on a trip to the lower atmosphere. And that’s just the start! Ever since Tomasi brought Damian back to life, he’s flipped the whole idea of Robin on its ear. Imagine a sidekick who’s essentially invulnerable. So far we have no idea what can actually hurt Damian. His powers are probably temporary, but it’s a really interesting character study in the nature of power and corruption since he’s been fighting the urge to kill ever since he became Robin and now he’s going to have to pull his punches so that he doesn’t do it accidentally. But the real strength of this title has been and continues to be the heart put in it by both Tomasi and Gleason. They’ve created some of the best father-and-son moments ever put to page when Bruce and Damian clash over how to handle criminals or when they’re just relaxing at home. And Alfred is written extremely well across the Bat-Family line these days, but this is where he truly shines. In the quiet moments that pull at the heart strings. 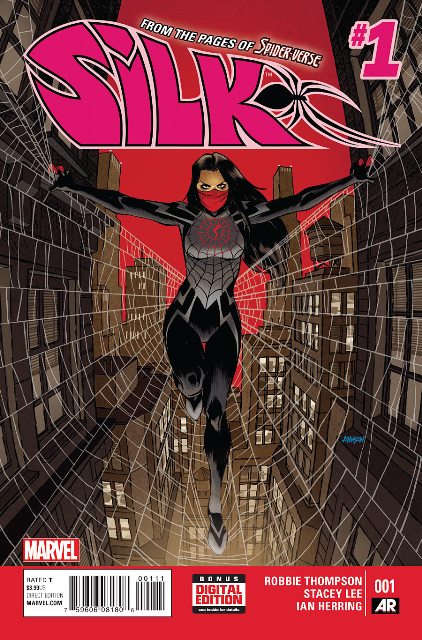 Cindy Moon exploded out of her bunker and into the Marvel Universe when we first learned that she had been bitten by that same radioactive spider in the first arc of AMAZING SPIDER-MAN. She then went on to save Peter Parker’s life (more than once!) and traverse the Spider-verse alongside Spider-Woman. Now, as SILK, Cindy is on her own in New York City, searching for her past, defining her own future, and webbing up wrong-doers along the way! Robbie Thompson (writer from TV’s Supernatural) fills this new ongoing series with his unique blend of antics and feels. Featuring stunning covers by Eisner Award winner Dave Johnson and interiors by future superstar Stacey Lee.

Picked because: She’s made quite an impact since her debut and now Silk is getting her own solo series. You’re likely to get a bit of exposition in this one, so those who didn’t follow Spider-Verse have a chance to find out a little bit more about this new character. In short, she was bitten by the same spider that gave Peter Parker his abilities, but her spider sense is stronger and she’s a bit faster as a result. Since she spent years locked away in a bunker supposedly for her protection, she’s got a lot of catching up to do. With Robbie Johnson handling the scripts, it should be both funny and heartfelt at the same time. And Stacey Lee may be relatively new to Marvel, but she’s about to make a real name for herself here. Look for her to be the real breakout star of this title. If you enjoyed her in Spider-Verse or if you’re just curious, give this issue a shot. You may find yourself expanding your pull list soon. 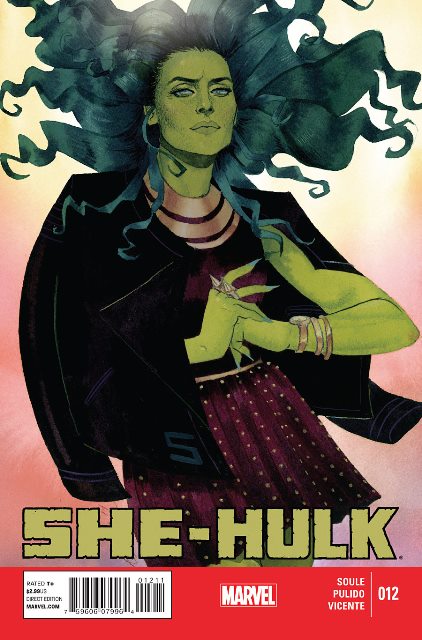 Picked because: It’s really sad when the market just doesn’t support a good book. She-Hulk was one of Marvel’s absolute best from the last couple of years. It was smart, funny, poignant and, above all else, fun. But if a book doesn’t sell, it won’t survive. Charles Soule’s take on She-Hulk was the best one written yet. He fully embraced her day job as a lawyer while making it part of her superhero identity, too. The last year has been a great ride and it’s sad to see it end. Soule is moving on to more projects at Marvel (he signed an exclusive dead, after all) and She-Hulk will be leading a new team of Avengers when A-Force launches in May. Marvel’s commitment to more female-centric titles has been great so far and some of the books, like Ms. Marvel, have done well. What sucks is that this book was written by one of the absolute best writers in comics today and had some of the most fun art but still didn’t get the attention from fans it deserved. Hopefully more people discover this gem in trade format. 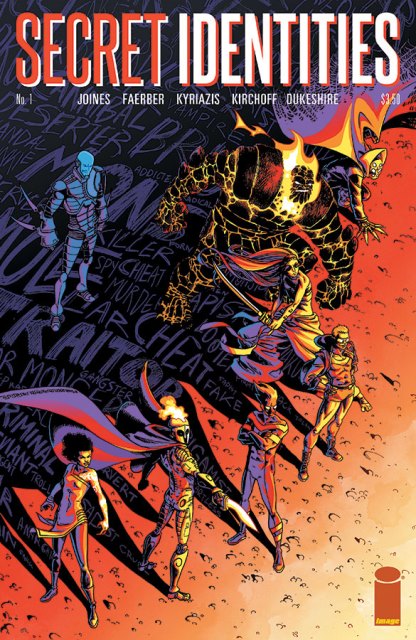 Art and cover by Ilias Kyriazis and Charlie Kirchoff
$3.50

The supergroup known as The Front Line have just invited new hero Crosswind to join them. But what they don’t know is that Crosswind is a mole, sent to learn all their secrets. And the Front Line have LOTS of secrets. Writers BRIAN JOINES and JAY FAERBER and the stunning art team of ILIAS KYRIAZIS and CHARLIE KIRCHOFF bring you classic super-team action and intrigue for the 21st century. Behind every mask is a secret…

Picked because: Image doesn’t jump into the superhero genre all that often so this is a bit of a twist. Jay Faerber has a nice sci-fi hit with Copperhead going right now so it’s great to see him getting even more work. Super teams can be lots of fun and this one will at least be accessible thanks to it not having ties to any previous continuity. While the sci-fi elements will be strong, this is also looking to add a bit of espionage to the mix. That’s what can set this title apart from just about every other superhero book out there, too. If you’re wanting a Justice League or an Avengers title but you don’t want the baggage that can come along with that, maybe give Image a chance to impress you. Here’s a possibility. 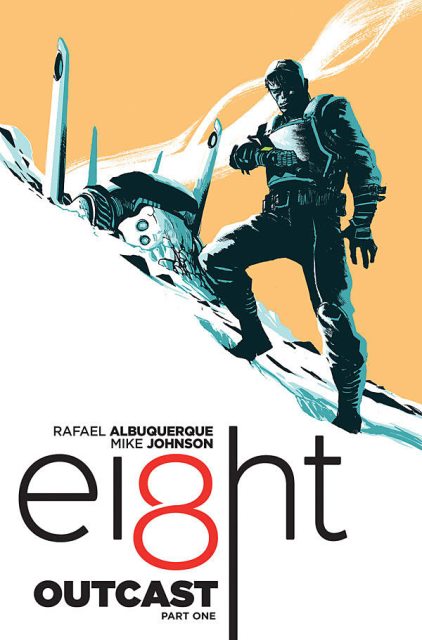 Art and cover by Rafael Albuquerque
$3.50

Welcome to the Meld, an inhospitable dimension in time where Joshua, a chrononaut, finds himself trapped. With no memory or feedback from the team of scientists that sent him, he can’t count on anything but his heart and a stranger’s voice to guide him to his destiny.

Picked because: Rafael Albuquerque has made a strong name for himself as a comic artist, working with Scott Snyder on American Vampire. Now he’s stepping into a new role as a writer. Mike Johnson (Supergirl, Action Comics) is helping him out with scripting. The art is absolutely gorgeous, so fans of Albuquerque’s style will love this title for that alone. Dark Horse hasn’t had very many breakout titles lately, but this is looking like an early contender for one of the biggest hits of 2015. That it’s only a five-issue mini should make fans happy that this won’t be another title to expand their pull lists and trade-waiters won’t be waiting too long to read the whole story. Several companies have been taking notes on how Image has been able to be successful in the creator-owned arena. Dark Horse has recognized the potential of this title and it’s likely fans will, too.