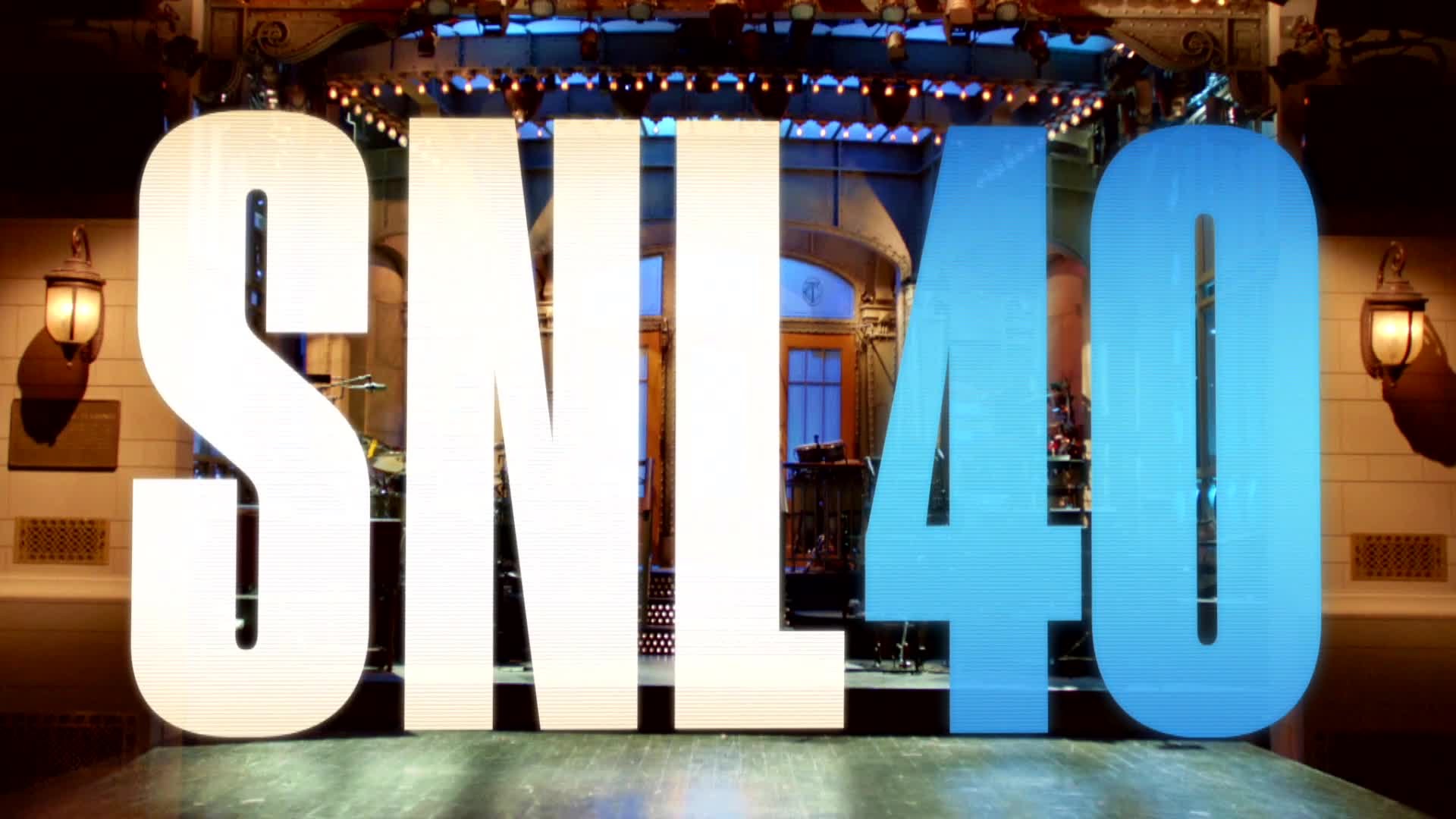 I don’t think anyone that wasn’t involved had any clue what to expect from the Saturday Night Live 40th Anniversary Special. We knew that Lorne Michaels had invited every cast member, host, musical guest, cameo artist, animal, and crew member to ever grace the stage of Studio 8H. But no one knew what exactly was going to happen, and I think that was part of the appeal. It could have been a clip show, it could have just a long version of the normal show featuring old favorites redone. Luckily, they struck a healthy balance of both. And while it wasn’t perfect, it did what it set out to do. It brought us back to the good ol’ days.

Everyone has their favorite cast member. Unfortunately, mine was tragically taken from the world far too soon back in the 1990’s. But Phil Hartman was far from being absent tonight. One of my favorite moments from last nights broadcast was the re-airing of the classic Colon Blow sketch. Hartman had some great bits on the show, such as the Unfrozen Caveman Lawyer, his unparalleled Bill Clinton, Eugene, the Anal Retentive Chef. But the real magic lies in how much of an everyman Hartman was. A showman when you need it, a neighbor when it’s appropriate, but relatable in every aspect. That’s why this was such a strong choice to air tonight, and why I miss Hartman relentlessly.

Also, I want to extend another wish to Tracy Morgan that he get well soon. And yes, that he gets us all pregnant.

Before the show began, I made a list of items in my notes that I guessed would make an appearance tonight.

Celebrity Jeopardy has always been the outlet for the cast to break out their signature impressions, and a source for Tumblr memes. What really ties the sketch together is how straight the normally man-boyish Will Ferrell plays his Alex Trebek. Darrell Hammond’s Sean Connery has come far from being a parody of the actor and in turn has simply become a character of it’s own. The inclusion of Kate McKinnon’s Justin Bieber speaks volumes towards her talent, as she has been the first current cast member to be mixed in with the MVP’s; she’s earned this. As has Taran Killam and his never boring Christoph Waltz. And of course Alec Baldwin’s Tony Bennett is a nice touch.

I adore Norm MacDonald and he has an incredibly strong Burt Reynolds impression. But I feel like his surprise appearance in this sketch would have been much funnier had they not done the same thing in 2009 when Will Ferrell hosted. Ignoring Jim Carrey’s Brian Williams faux pas on the red carpet, his Matthew McConaughey impression has stolen this sketch, properly capturing the spirit of the Oscar Winner’s meditative media presence with ridiculous statements. I’ve seen Carrey in person, and he has a strong presence. His ability to hone in on this character speaks to his range of insanity and stealth.

As soon as Pete Davidson and Leslie Jones come out to introduce videos of auditions, it has become clear that they plan to squeeze in this mammoth amount of celebrities by relegating them to cameos introducing various clips and performances. It sort of feels like cheating to not have people more involved, but I’ll take it. (I haven’t seen Jack Nicholson since the 2013 Oscars, and before that a 2010 James L. Brooks movie. Any excuse to see him is acceptable to me.) These clips are always fun to see again, but aside from the auditions, these aren’t things that can’t be found on the internet. I would have liked to see more sketches. Considering Eddie Murphy has been absent from this stage for 30 years, and from movie screens for 3 years, I would have loved for him to demonstrate to a new generation what made us fall for him in the first place. (Because I have never seen Chris Rock talk this positively about anything. Ever.)

I’ve never really been mindful of the musical performances on SNL. I tune out most of the time. However, considering the talent in attendance, I was sure that it would be a step up from the normal. To my great surprise, the strongest one this evening has come from Miley Cyrus singing “50 Ways to Leave Your Lover.” Considering Paul (both McCartney and Simon) were both here, and that Simon actually wrote the song Cyrus sang, thats an incredibly impressive feat. When her performance was introduced, I verbally exclaimed “Why?” I have never been happier to have been shut up.

While we’re talking about music, it was wisely chosen to make a long medley of all the best musical characters the show has had. They could have done a night-long special on these characters alone, but there was a real magic in seeing them come together. Will Ferrell and Ana Gasteyer make a brilliant return as Marty and Bobbi Mohan-Culp singing their bingo-night versions of popular music. I always wondered why Gasteyer never really broke into that mainstream fame, but I digress. We also get the “return” of Fred Armisen and Kristen Wiig as Garth and Kat. I use the term “return” loosely because in all honesty, they don’t really seem to have left the show since leaving the show. They’re both extremely talented, don’t get me wrong. But I can’t really appreciate the nostalgia of their return if they keep popping up every couple weeks, no matter how much fun they are. That’s why I couldn’t really enjoy The Californians returning tonight either. Even if Bradley Cooper ran away with my applause.

Steve Martin’s King Tut makes a brief appearance before receding to his sarcophagus. I can understand that decisions need to be made, and time constrains all, but I would have preferred to see more of Steve Martin tonight. The fact that he and Dan Aykroyd were both in the building and did not don their Festrunk personas feels like a larger waste than when Queen Elizabeth visited the Game of Thrones set and didn’t sit on the Iron Throne.

Adam Sandler’s Operaman comes back for about 15 seconds then retreats, but we’ll get back to him in a moment. Joe Piscopo’s Frank Sinatra ring-a-dings equally as briefly. As does What’s Up with That and the Blues Brothers who close it out. But easily the best part of this bit is Bill Murray as Nick Ocean who sing us “the Love Theme from Jaws” whilst Paul Shaffer tickles the plastic ivories behind him. Murray is a living legend, and his ferocious passion here as he belts out Goldfinger like lyrics about Steven Spielberg’s shark show his unrelenting commitment to the bit.

Weekend Update could have gone any number of ways, with any number of anchors. But they brought back three of the best. Tina Fey, Amy Poehler, and Jane Curtin. The jokes are topical to the SNL special, but it’s a deserved pat on the back for the show’s longest running segment. It also serves as a way to help honor the late Chris Farley by having Melissa McCarthy play Matt Foley, and the late Gilda Radner by having Emma Stone play Roseanne Roseannadanna. I worried for half a second when Edward Norton plays Stefon, but Bill Hader comes back to show that he is irreplaceable. The men of Update make an appearance, and Kevin Nealon stumbles an abnormal amount as they introduce Chevy Chase. This wouldn’t be complete without an appearance from Garret Morris from “the New York School for the Hard of Hearing.” (I wish Chico Escuela had shown up).

As I predict, Wayne’s World makes its return in the last 15 minutes. At this point, our favorite 20-year-olds remind me of Harrison Ford in the fourth Indiana Jones movie. But it’s brilliantly updated. They kiss up to the legacy of SNL a little more than I had hoped, but the jokes at Kanye West (and his good sportism) save it.

The highlight of the evening for me was the Digital Short from Andy Samberg and Adam Sandler. It’s incredibly meta to have a song about Breaking, and how Lorne Michaels loooves the practice. Like all of Samberg’s digital shorts, this has the fast paced rhythm of modern pop mixed with satirical lyrcism packed to the brim with absurdity. Adam Sandler is an excellent compliment to the sketch as I have long viewed him as Samberg’s spiritual ancestor. The knocks at Jimmy Fallon and Horatio Sanz were expected, but the most enjoyable portion is Samberg knocking the failure of their film That’s My Boy and Sandler asking why he would bring it up.

Saturday Night Live deserves this attention to writing on a weekly basis. The show continues to be a weekly ritual for me, but lately it hasn’t been as strong as it was tonight. The current cast has the tools to make that happen, they just need to work on it a little more. This was a fitting, if not slightly off the mark tribute.

And for the record, Jon Lovitz IS still alive.