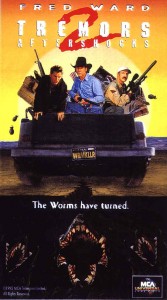 Plot: When an army of Graboids – giant, carnivorous underground worms – threaten the Petromaya oil refinery in Mexico, its owners call on Earl Bassett and Burt Gummer to take care of the problem.

Review: Who says direct to video has to be so bad?

I absolutely love the first Tremors film. No, it wasn’t the most original story (I believe Dune had underground worms that ate people first), but it sure was cheesy, entertaining fun. It didn’t take itself too seriously and ended up being a nice little monster flick.

Tremors 2: Aftershocks looks to do the same thing and on many levels it does. The film picks up a number of years after the first with an attack on an oil refinery in Mexico. The owners turn to Earl Bassett (Fred Ward) from the first film. They offer him 50 grand per Graboid he kills with them estimating there to be four or five. Earl jumps at the chance to earn some money and heads to Mexico with Grady as his new sidekick.

After killing a few Graboids, they realize they need help and call in Burt Gummer (Michael Gross), the gun nut from the first film. It’s not long before the Graboids turn the tables on the guys by evolving into a new type of Graboid, which they call a Shrieker. Think of it as a smaller dog like creature that pops out from a Graboid, in fact, several pop out from a Graboid. These Shriekers walk around and hunt on heat causing even more problems for Earl and company.

Surrounded at the oil refinery and without means to fight off the Shreikers, Earl, Grady and Burt end up using a few tricks to eliminate the Shreikers. At one point, however, the Shreikers are able to multiply by eating food and apparently they can spawn themselves without having to mate (very convenient). Thankfully, Burt happened to bring enough explosives to fight a small army and allowing our hero’s to blow the last of the Shreikers into smithereens.

Direct to video sequels typically tend to be pieces of shit regardless of what genre we’re talking about. The horror genre tends to get the worst of the direct to video sequels, but that’s not the case with Tremors 2. We get a few familiar faces and while Kevin Bacon didn’t return, having the original film’s co-stars isn’t too bad. Especially when one of them is Burt Gummer, the badass gun nut from the first film.

The setting works for the Graboids as well. It puts us in a new place without having to explain why the worms are back around Earl. Grady, the new sidekick works. He’s not terribly annoying or smart so he slides somewhere right in the middle. The Graboids and their Shrieker kids look good and the havoc they cause looks impressive. I love how the characters had to rely on their wits to finish off the Shriekers just like the first film.

Some complaints I have are the effects of the Shriekers. In some shots, you can tell they were using computer effects and in others they used puppets. The difference is clearly noticeable and at times takes away from the film. I think full on computer effects would have been a better way to go. Either way, they look cheesy so they might as well be consistent with it.

I also think that the Shriekers are not a good substitute for the Graboids. I mean the film is called Tremors and the Shriekers do all their work above ground… yeah. I wish there had been more time spent fighting the Graboids with some more creative kills and methods to kill them.

Acting: I’ve always enjoyed Fred Ward. He’s been a great character actor and when he gets a chance to be the lead of a film, he does just fine.

Christopher Gartin is fine as Grady. He doesn’t grate on your nerves too much and is pretty much the sidekick you’d expect to have, namely stupid yet useful.

Michael Gross is once again awesome as Burt Gummer. This guy is a trip.

Gore Factor: We don’t get much red unless it’s a Graboid blowing up, but that’s not necessarily a bad thing.

Overall: Tremors 2 proves that direct to video sequels don’t have to be terrible. They can take the original story and add onto it. While Tremors 2 isn’t as unique or fun as the original, there’s still plenty to enjoy here. It’s an easy way to waste a Sunday afternoon.