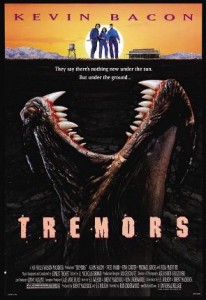 Plot: Natives of a small isolated town defend themselves against strange underground creatures which are killing them one by one.

Review: Man oh man, where to begin? I love Tremors, everything about it is a blast. It’s a B-Movie, make no mistake about it, but it’s done so well that it ends up being far more entertaining than people expected when it came out.

The plot is very simple: underground creatures, later known as Graboids, are hiding underground around a small desert town in Nevada called Perfection. The creatures have been around for some time, but just now start to feed on the town’s people. We’re left with two main heroes, Kevin Bacon and Fred Ward, to keep everyone alive and find a way out of town or a way to kill the creatures.

The idea itself is quite a good one: What if you couldn’t just walk on the ground? It’s a hell of a scenario which allows the writers to put the characters through some strange but entertaining situations. It’s the perfect way to stack the deck against our heroes and make their struggle feel fresh against these “new” creatures.

One of the best scenes is when a Graboid makes it’s way to Burt (Michael Gross) and Heather’s (Reba McEntire) house, who just happen to be “end of the world” freaks that have stocked their basement with plenty of guns, ammo, food and water to survive the end of the world. They shoot the ever loving shit out of this Graboid, using everything from assault rifles to shotguns to flare guns before the beast goes down. It’s quite a scene, and possibly the most fun of the entire movie.

Ron Underwood did a great job of building the suspense when it came to the Graboids and having them take their victims without the audience getting to see them. It’s almost like Jaws in a way, where we see people getting attacked and get hints at what’s happening, only to get a big reveal about half way through the film.

Ron did a great job keeping the pace steady and never slowing down, I never once felt bored watching this movie way back in the day, or last week when I threw it in. The writing is sharp here, and it never feels like they were revealing too much or too little, and when our heros get in trouble, they pull out plenty of neat tricks to save their butts up until the end.

The only issue I had with the film was the secondary characters and the tendency to kill them off without any build up. It’s hard to feel sorry for some of them when you barely know them, but I understand needing to build the monsters up so the good guys can take them down.

Acting: I’ve never been a big Kevin Bacon fan, but I’ve never had anything against him. He did a great job here as the lead, acting all Kevin Baconish.

Fred Ward is one guy who never seems to get his due. While he was never a big name actor, Fred has done some great work over the years and brings it here as the older hero to Kevin Bacon’s young gun character.

Michael Gross is fucking awesome as Burt Gummer, playing up the “world is ending” character and kicking ass at the same time. It’s hard to believe Alex Keaton’s father could kick so much ass.

Reba McEntire (or Ariba as my long time personal friend Bobby calls her) may have been annoying with her sassy character on the Reba show, but here she hadn’t been acting at all and even though it was a rookie role, I liked her as Heather Gummer. She was a great partner for Michael Gross, bringing it equally in the “shooting first, ask questions later” department.

Gore Factor: There’s a fair amount of gore here, with people getting eaten alive by Graboids and then the Graboids themselves getting blown to smithereens. Plenty of blood and guts here.

Nudity Factor: The ladies get Kevin Bacon to look at for an hour and a half, the guys get a cute Finn Carter in her underwear, but no nudity.

Overall: I can watch Tremors just about anytime. It’s got a great mix of action, gore and comedy to keep the audience laughing or screaming for an hour and a half. The film would spawn some direct to video sequels, and the second one was probably the best of the other three, but the first still holds up today. Check it!