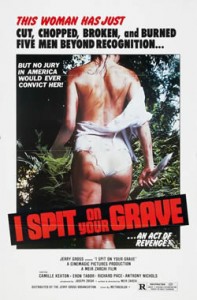 Plot: New York short story writer Jennifer Hill rents an isolated cottage by a lake up state with the intention of writing her first novel. After meeting a group of young men at a local gas station, Jennifer is attacked by said men, raped and beaten. Barely surviving the attack, Jennifer turns the tables on her attackers, taking her revenge on each of them one by one.

Review: Day of the Woman, or I Spit on Your Grave (I like the Grave title myself), is easily the hardest horror movie I’ve ever had to watch. The first time I checked the movie out was way back in 1999, and I just watched it again this past week to gear up for the review. Anyone that’s watched the film knows how hard it can be to make it through the entire movie. It’s not because the film is poorly written or shot, instead it’s the subject matter that makes the movie incredibly tough to watch.

Don’t get me wrong, I’ve watched plenty of movies where women, and in some cases men, get raped. With I Spit on Your Grave, the entire rape aspect of the film is not only brutal, it’s done so much that it almost becomes overkill. I remember the first time I watched the film, with my brother and a few friends, and none of us said a word while the rape scenes were happening. Then, when Jennifer reaches her home, where she should be safe, I jokingly said, “I bet those guys are there too” and wouldn’t ya know it, they were. I felt horrible then and I feel horrible for it now.

The movie isn’t all about the rape scenes though, those are just the set up to the revenge Jennifer would take on her attackers. The way she extracts her revenge is a site to behold, with the bathtub scene easily being the hardest to watch out of all of them. There’s a real sense of horror that’s happening to Jennifer here, and seeing her get revenge doesn’t make the viewer feel any better for her, as there’s almost nothing she could do to make up for what happened to her.

Meir Zarchi did a great job with the writing and directing, and you’d think he would have went on to have a big film career, but he’s only written and directed one other movie. It’s surprising that he didn’t stick with directing, because I Spit On Your Grave is a tightly written and well shot film, and he could have brought some goods to other horror and non-horror films along the way. Some of the dialogue is rough around the edges however, and the look of the movie being from the 70’s could throw viewers off.

Zarchi to his credit didn’t beat around the bush when it came to the rape and revenge scenes. Zarchi pulls the viewer into both and is relentless with what he shows the audience, and the mix of scenery and little to no music only makes the impact of what’s happening all the more effective. It’s similar to Texas Chainsaw Massacre in that no music ups the horror of the film, and everything feels very real.

Acting: Camille Keaton brings it as Jennifer Hill. She’s soft for the first half of the film, playing the shy quiet girl to perfection. She keeps that performance up as she takes her revenge, smiling sweetly as she kills each guy one by one.

Eron Tabor plays Johnny, the “leader” of the group. He’s vicious and sick and Eron played the role to perfection.

Gore Factor: Let’s see, we get a hanging, a castration (OUCH!), an axe to the back and a disemboweling! There’s not blood flowing off the edges of the screen but what we get should more then satisfy gore hounds.

Nudity Factor: Camille Keaton bears all here, but there’s nothing to get excited about with all the rape that’s happening.

Overall: I Spit On Your Grave is not an easy film to watch, and it’s not one that I suggest anyone keep around for repeat viewings. However, I do believe it’s one movie that horror fans should watch just to know that not all horror has to come from masked killers, demons and ghosts.