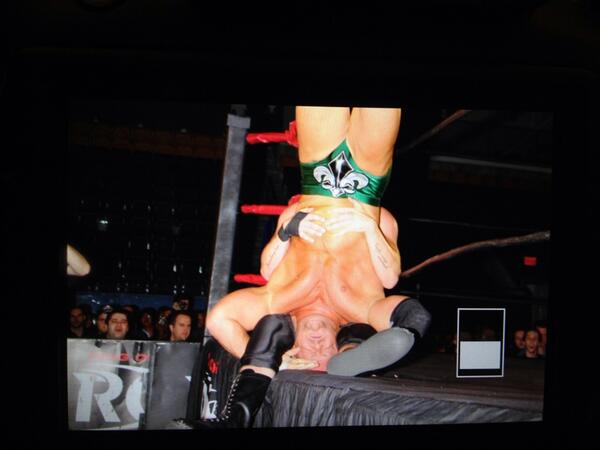 This week’s episode of ROH TV takes us to the Mattamy Athletic Centre in Toronto as the World Title Tournament carries on with three big matches. We waste no time in heading right to the ring for our opener.

Silas earned this slot by winning a play-in match. He also rules. Kevin Kelly is again joined by Nigel McGuinness this week. You can tell this show was not filmed for TV as the quality is a bit more gritty, although it kind of fits well for a Silas match. KK reminds us that these two have had a war before in a showdown in Michigan. This is a pretty big spot for Silas, easily his highest profile match to date. They tangle up and end up tumbling around the ring and out to the floor before the referee finally breaks things up. Back inside, Young slugs away but Ciampa returns the favor. This is my kind of match, just two tough dudes beating the shit out of each other. Ciampa lands the first real heavy blow with a boot to the side of the face of Silas. The crowd is rabid for the Sicilian Psychopath here. Silas looks like he came right out of the 1982 Milwaukee Brewers bullpen. Harvey’s Wallbangers! Young takes over as we take a break and hear from RI Dolls amongst other sponsors. The fans explode as Silas snaps Ciampa off the apron and to the floor with a suplex. That was hella nasty. Ciampa somehow survives and actually turns the tide as they head back inside. Ciampa folds him up with a dragon suplex but Silas kicks out. Silas comes back with a pair of near falls and I am just hoping one of these is for a three count. I am a Silas Young guy. KK needs to hook us up and get him on the PTB Podcast. Silas slips free from Project Ciampa and we get another heavy slugfest that ends with a Silas flurry, but Ciampa just shrugs it all off and hits the PC to advance. Boo. Silas was hosed! And he doesn’t shake Ciampa’s hand. And KK doesn’t like it. Too bad, go screw, Hermie! That was a very fun stiff brawl, natch.

Hache mache, here we go. Maria leads out Michael Bennett, who we are told has inked a brand new deal to remain with ROH. As long as Maria remains on my TV, I don’t care if Bennett was on ROH, WWE, TNA, Keeping Up with the Kardashians, Vampire Diaries or Biggest Loser. But I am glad he resigned as he fits well in ROH and he can be a star for them. Nigel blames Maria for all the recent changes for Bennett, acting as if they have been bad ones. Whitmer gets off to a hot start, knocking Bennett to the floor and then diving out after him. Things slow down a bit here as Maria helps Bennett take over the match. They head back to the floor where Bennett lands a kick to the face. Maria likes it rough. Nigel is as lost as I am after that. After a break, Bennett is still in control, hitting a spinebuster for two. This match feels like it is in slow motion after that opener. Bennett is frustrated with Whitmer and BJ takes the opening to start tossing bombs. Both men wipe out after a double clothesline, giving Maria an opening to get involved. She left one of her spiked shoes on the apron, but Nigel grabs hold of it and throws Maria out of ringside, pissing off the fans. And me. BJ takes advantage of all the shenanigans, hitting a powerslam and a running knee, followed by a pair of suplexes for a near fall. Bennett survives a fisherman’s suplex as the crowd starts to turn on this one a bit. I empathize as I just can’t get into Whitmer. They spill out to the apron where Bennett murders Whitmer with a piledriver on the ring apron. That was gross, unnecessary and as we know, caused some serious injuries for Whitmer. The match was not very good and capping with something so insane didn’t exactly close it out on a good note. Bennett advances.

Ok, now we are talking. Paul London is back after suffering a gross injury back in May. This is the match that was supposed to happen, but was cancelled after London had his head caved in by Davey Richards. Elgin is the number one seed in this tournament and is the clear favorite here. He gets a very nice hometown pop and I am looking forward to this one. We get a lot of feeling out early as London is trying to decide how to approach this. Elgin switching to the tights from the singlet shows he is in for big things here. KK confirms my thinking that London is in the best shape of his life. He looks great in there. He dumps Elgin to the floor but Elgin slips back and crushes London with a shoulderblock. London recovers and grabs a front facelock to slow Elgin down. London flies off the top rope but Elgin catches him. London slips free but after a few reversals, Elgin lands a powerslam for a near fall. Nigel wonders how that concussion may be affecting London, making him weary and think too much while in the ring. Elgin hoists London up and holds the vertical for about :47 before dropping him to the mat for a near fall. As Elgin considers his options, we take our last break. When we come back, they are on the apron and the fans chant “Please don’t die”. Heh. London ignores them and sends Elgin flying to the floor with a hurricanrana from the middle buckle. Back in the ring, London hits a kick in the corner and goes for a sunset flip, but Elgin blocks it. Elgin comes up empty with a sitdown splash, allowing London to hit a standing moonsault for two. The pace picks up as London starts flying around a bit, but Elgin stops him cold with a sidewalk slam. London avoids the bucklebomb but seems to tweak his knee, which Elgin can’t take advantage of. London actually takes the advantage when trading blows and Nigel points out that Elgin is sucking wind and both he and KK wonder if London was playing a little rope-a-dope to wear the big man out. Elgin walks right into a dropkick that send him crumbling to the floor. London follows him out with a somersault senton. Elgin starts to get to his feet, but London comes off the top with a double stomp to the back. He quickly shoots Elgin back inside but Elgin survives. KK thinks London’s confidence is back here, but Elgin slugs him in the face and meets him on the top buckle. London ends up on the apron but he isn’t there long as Elgin dead lifts him up and over for a superplex and two count. London again avoids the bucklebomb and hits a reverse hurricanrana! Nice move there. London heads up top and hits the SSP but Elgin narrowly kicks out at the last second. Both men again end up on the top rope, but Elgin takes him with a super powerbomb. He follows that by cracking London with a spinning backfist and polishes him off with the bucklebomb for the win. Elgin advances on. London goes home. That was a super competitive match and was a really good main event as expected. The only issue is that the finish was a foregone conclusion so some of the late drama was gone. Still, it was a really fun and was good to see London back at it after the scare in May.

Well, you can’t really complain about a tight episode like that, with three matches and no fluff. It greatly moved along the tournament and brings us closer to the second round. The opener and main event were really good but the middle match dragged the show down, and that was before the depressing injury to Whitmer. Hopefully BJ is OK but he was not looking good even before the finish and I just think he is a bit out of his element here. It is also clear that Bennett isn’t the guy to carry him. Still, the right guys went over (well…SILAS should have, but I digress) and the wrestling was rock solid as always. Everyone have a great week, take care and always respect the code!