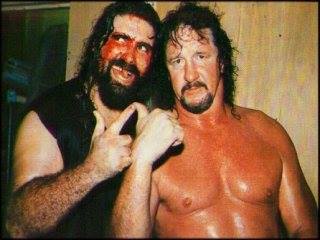 How have we gone from Wargames to Kiss Me Arse matches? Does hardcore still exist in today’s WWE?

This week on The History of Wrestling Podcast, Graham Cawthon, Brad Stutts, & Dan McGinn talk the evolution of hardcore wrestling throughout WWE, ECW, and NWA/WCW and discuss the role of WWE’s ‘Extreme Rules’ in the modern era.

They also give their thoughts on Sunday’s Extreme Rules. What worked, what didn’t, and what made the event stand out (or not) in the WWE calendar.

Each week, the boys will present their Clip of The Week. This week’s offering takes a look at an extreme showdown in WCW from the April 29, 1996 Monday Nitro as Lord Steven Regal and Fit Finlay took place in a parking lot brawl. Be sure to check it out on WWE Network!