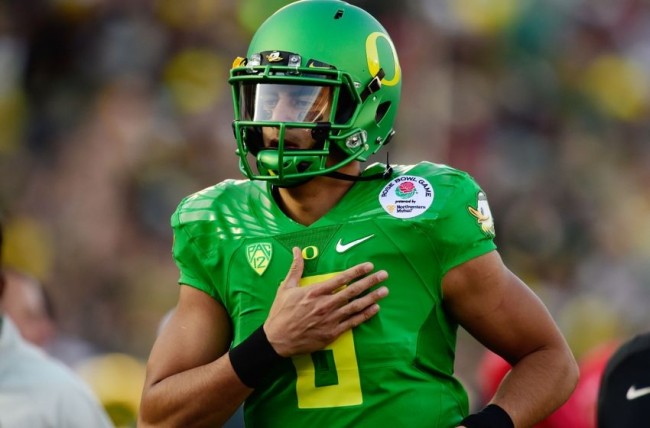 Today is the day we have all been waiting for as the NFL Draft kicks off tonight at 8:00 PM EST with the first round. To prepare you, our faithful readers, for the madness, the “Cowboy” Roger Morrissette and Andrew Flanagan went back and forth over the last couple of days and mocked the whole first round. The rules they used were simple: who would you draft if you were the GM and why? To be clear, Cowboy and Andrew’s picks are not intended to be predictions. They have simply put on their GM hats for all 32 of the NFL teams and drafted the players they thought were the best fit. Without further ado… it’s draft time!

Also, be sure to check out last year’s installment as well!

Flanagan: The team is obviously desperate for a quarterback, and while every indication is that Tampa prefers Winston, Mariota’s weaknesses (system quarterback) worry me less than Jameis’s (turnovers, slowish release).

Cowboy: Flanagan wastes no time in committing the first massive boner of the draft.  While I think Mariota could eventually be a good NFL QB, Winston is pretty much a sure thing. The risk with Jameis is the gaffes he has made in his personal life. While I don’t discount that, I believe the bust-risk with Mariota is at least as concerning. Unless he is drafted by Philly, Mariota will have a HUGE learning curve in the NFL that has derailed other guys. In this scenario, I think Tennessee actually keeps this pick and drafts Jameis.

Flanagan: Probably the best non-QB draft prospect, the Jaguars should be happy to get him at number 3.

Cowboy: The Raiders need to add weapons around young QB David Carr, and Cooper fits the bill. He is, by far, the most polished receiver in this class and flashed enough athletic ability to justify this draft slot. He is the selection by a razor thin margin over Kevin White.

Flanagan: Washington’s roster could use some improvement across the board, so they’d be better off trading down from number 5. Since I can’t do that, I’m going with the best prospect available, Fowler.

Cowboy: I love this scenario for the Jets. Their biggest need, of course, is at QB. They won’t be able to fill that here. The next best thing would be to land the WR with the most upside in the draft. White is an athletic freak who can learn the game from Brandon Marshall. Sign me up!

Flanagan: The Bears need to overhaul their defense, and adding an explosive edge rusher like Beasley is a good start.

Cowboy: Ummmmm… we drafted before Ray was busted for pot. Clearly he won’t go 8th. However, Atlanta needs help on the offensive line and the whole defense. Given a mulligan, I would go with Brandon Scherff here.

Flanagan: This pick makes so much sense on paper, it’s almost guaranteed to not happen in real life.

Cowboy: This was a very difficult decision for me. I was torn between Peat and DeVante Parker here. I’m a bit gunshy on drafting another WR this early for the Rams after the Tavon Austin disaster so Peat is the choice. He fills a need and should be a solid offensive lineman for years to come.

Flanagan: Another pick that almost makes too much sense, as the Vikings address a big need with the highest rated CB.

Cowboy: Strictly a value pick. Dupree has top seven talent and should be able to step in and contribute right away.  Cleveland has so many holes that they have to take the best player available. Bud fits that bill.

Flanagan: The Saints’ run defense was a disaster last year, and Shelton goes a long way towards addressing that.

Cowboy: While I don’t love taking a RB this high, Gurley does have a tantalizing skill set. Miami, a team that is annually 8-8, needs to swing for the fences. Gurley is the type of high risk, high reward pick that could pay big dividends in the second half of the season once he is fully recovered from his ACL injury. He flashed difference-making talent at Georgia.

Flanagan: The 49ers need to address their losses on the defensive side, but I don’t think they will pass on Parker if he falls to them.

Cowboy: Perriman is one of the more divisive players in the draft. Based solely on his combine performance, he should be the first WR off the board. The game tape is a little troubling as he suffered some pretty ugly drops. For the Texans, the thought of pairing Perriman up with fellow game-breaker DeAndre Hopkins is too tantalizing to pass up. Perriman is a boom or bust type pick for a team, like the Dolphins, who is stuck in mediocrity.

Flanagan: The Chargers’ pass rush has been a weakness for a while, and Gregory is talented enough to make this pick worth the risk.

Cowboy: Here is my first round shocker. Like Christian Ponder, EJ Manuel, and Jake Locker before him, Bryce Petty will get drafted way higher than anticipated. I think it makes sense for the Chiefs to grab Alex Smith’s eventual successor and Petty fits the bill.

Flanagan: With Josh Gordon suspended again, Cleveland could use a receiver like Dorial Green-Beckham, but they probably don’t want to take on another character risk. Flowers is the safer pick.

Cowboy: Philly spent a lot of money on their offensive backfield this offseason. They need to address their secondary in the draft and Peters is the best CB available at this point. (I firmly believe that Philly will be trading up for Mariota and will pay a king’s ransom to do it.)

Flanagan: DE/OLB is a bigger need, but Malcom Brown is a better value here.

Cowboy: The Steelers need to replace the retiring Ike Taylor and Johnson is the best CB on the board. He could step in and start right away.

Flanagan: The Lions need help on the defensive line, but with the best DTs off the board, they can address another need with the second rated RB on the board.

Cowboy: The Cardinals need a RB badly but Mr. Flanagan took the last first round talent available right in front of them. Everyone knows that the Cards had trouble keeping their QBs upright last year and Humphries will help bolster a shaky OL.

Flanagan: The Panthers need an offensive tackle badly, and would be happy to see someone like La’el Collins fall this far.

Cowboy: The Ravens need to replace Torrey Smith and Green-Beckham is the man to do it. Given his off the field concerns, Baltimore should be a great landing spot for the talented WR. They are a team with strong, veteran leadership in the locker room. Green-Beckham’s size/speed combo are a perfect fit for Joe Flacco’s big arm. If this pick comes to fruition, Green-Beckham will be your OROY with well over 1,000 yards receiving and double-digit TDs.

Flanagan: The Cowboys could use some defensive line help, but get better value addressing their cornerback issues with Collins.

Cowboy: Easy pick for the Broncos right here. Irving fills a need, adds youth, and is the best C in this draft by a pretty significant margin.

Flanagan: Another need pick, as the Colts address their weakness at safety with a player once considered a potential top-10 pick.

Cowboy: Another pick that fills a need. Everyone saw Aaron Rodgers take a beating from Seattle last year when Bryan Bulaga went down with an injury. The Packers add depth at a position of need.

Flanagan: After trading away their top two receiving threats from last year, the Saints can pick up a new target here before addressing their pass rush in the second round.

Cowboy: Another year, another WR pick by the Cowboy for the Pats. Last year I had them taking Kelvin Benjamin. This year it is Strong, the odd man out in this Mock Draft. Strong would be a perfect fit in NE and would provide Tom Brady with another deep threat. Strong’s ball skills allow him to win on jump balls…something the Patriots don’t have in their receiving core (outside of Gronk of course). C’mon Bill… do this one for Tom!