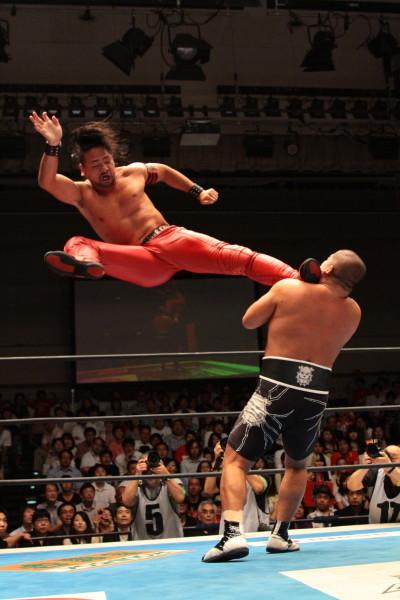 Korakuen Hall is up there with the most sacred buildings in wrestling history. It is always guaranteed to have a hot crowd especially when a G-1 graces its prescence there. This card didn’t look spectacular, but I was again hopeful of some surprises.

Not much of note until the finishing sequence when Benjamin starts working over an ankle lock. Kojima, to his credit, doesn’t immediately discard this as he collapses at different points throughout his comeback. Benjamin attempts to hit a Paydirt but Kojima is able to reverse and lariat him into next week for the win. Benjamin has fallen on some tough times now after starting off the tournament super hot. **1/2

Perfect placement and length for a Yano match. The Korakuen crowd of course eats up all his scthick and he adds a few wrinkles including framing Archer with the chair before giving him the nut shot. Archer shows some resilience and comes back to hit the blackout powerbomb for the victory. Boo! I have such an irrational love for Yano and his matches since they feel so different from the rest of the card that I’m sure I may be ranking them high in context. I really wish he would have won here setting him up to be a potential dark horse contender on the back half of the tournament. **3/4

To say I didn’t have high hopes for this one would be a gross misstatement. Anderson has turned in one performance I have liked in this tournament so far, but that is one more than Yujiro. This wasn’t great but It wasn’t atrocious either which I guess can be touted as a success. Yujiro still is unable to come up with anything remotely interesting while on top. This is even more frustrating and striking after the Yano stuff. You can look at Yano and Yujiro side by side and see who has the most raw talent. Yet, Yano maximizes and finds creative ways to engage the fans while Yujiro sticks out his tongue. Anderson luckily abandoned most of the theatrics of the finishing sequence and wins this battle of Bullet Club members with an ace crusher. **

Here is a good chance for the two foreigners to impress in front of the Korakuen hardcores. This was a good hard hitting match up that accomplished everything they tried to set out. They didn’t overextend themselves and kept the action simple but effective. Everything had a logical build and I really enjoyed DBS Jr. having to result back to the trusty Sharpshooter when all of his other tactics went awry. Really good performance by both men that hopefully they can build off of. ***

Tenzan has transformed himself from being someone I dread to whom I welcome on my screen. Goto has been inconsistent overall this tournament. This match along with Naito vs. Styles are the two biggest surprise matches we have had so far. I thought this built extremely well to the strike exchange. Goto brought a ton of offense and was relentless with his attack making Tenzan look overwhelmed. Tenzan’s comeback was sublime with the crowd right there with him on every chop and strike. The segue into the Anaconda Vice was lovely and it felt like a monumental moment with Tenzan won. Splendid stuff. ***3/4

Big test for Honma against the limited Fale. Well, this was a good ol fight. Fale stalked after Honma early on but Honma made a quick comeback and then followed that up with a diving headbutt to the floor to prove to Fale that he was in a fight. Honma of course was incredibly sympathetic with the crowd and they popped huge when he kicked out of the thumb to the throat. Fale follows that up with a Bad Luck Fall dumping Honma right on his head to win this battle. This show is looking up in a big way. *** 1/2

This match started off pretty ho hum. Not bad but not great either. Then, after a strike exchange we entered the finishing stretch which was insanely great. There was an immense struggle for holds in the end that culminated in Togi attempting a German suplex from the top rope. Naito struggles and resists for as long as he can and Togi responds by bonking his head against the ring post. The crowd shot of this sequence is amazing and they are loving every second of this exchange. Togi finally gets it and secures the victory. This was another really good match for this show. ***1/2

Holy crap! I know the hype was strong for this one and I have loved Styles so far this year but Suzuki shows us how great he can be. This is my current #2 MOTY behind the Elimination Chamber Wyatts vs. Shield match and I need to watch both back to back to be sure. Psychology, brutality, amazingly athletic spots, finger manipulation, struggle, even interference all crafted together to make this a masterpiece. So much stuff to mention that had me entranced and clapping along at my computer screen. I don’t want to spoil the ending, I will just say it was the completely logical and glorious. Superb stuff by both men. ****1/2

I didn’t have too many expectations coming in here, but once again on this show they were greatly exceeded. Shibata is able to out Nagata’s Nagata in an interesting twist on how Nagata’s matches have gone so far in the tournament. Shibata showed some added verstatility and range here beyond the generic ass-kicker role. Nagata plays the veteran role well and times his comebacks perfectly. In the end, Shibata is too much for him and moves on to the dismay of the Korakuen crowd. ****

I was salivating at the thought of this match and it didn’t disappoint. At 15 minutes, this was the perfect combination of time and brutality. The mirror spots in wrestling that I normally detest were logical here and built to a stunning finish. I especially liked the use of the 1 count in this match and that is really only a spot I can stand when Ishii does it. Nakamura’s kicks and overall demeanor were on display here and things like him rolling through the armbar and the Boma Ye to finish the match displayed his athleticism to go along with the character work. A great match to end a great card. ****1/4

Night 7 thoughts: What a great show. The match of the tournament so far is Suzuki vs. Styles and Ishii vs. Nakamura isn’t too far off that mark in my opinon. The rest of the show ranged from great to good with only the Yujiro vs. Anderson match being a low point. I have this above night four and would put this as the second best top to bottom wrestling show of 2014 (all intangibles still have Mania #1).