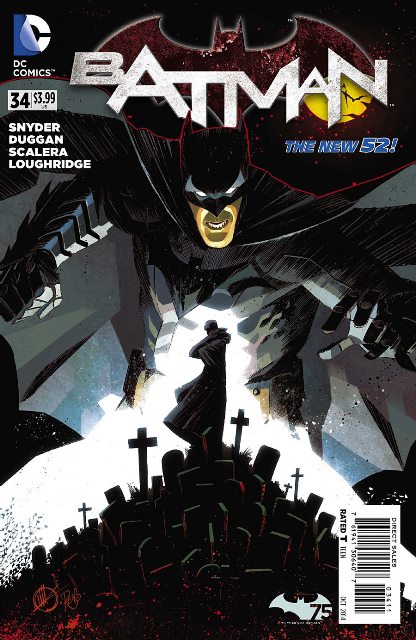 Art and cover by Matteo Scalera
$3.99

ZERO YEAR is over, and the events of BATMAN: ETERNAL have put Gotham City in a tailspin, but Batman is focused on finding a killer who has haunted his hometown in secret for years. This special issue features art by Matteo Scalera (DEADPOOL, Black Science) and sets the stage for the next major Batman story in the fall.

Picked because: It’s time to leap back to the present for Batman after the incredible Zero Year concluded last month. But, that’s not all that’s happening here. This brief “breather” issue takes place during the events of Batman Eternal to set up the upcoming Arkham Manor title, launching in October. Gerry Duggan will be writing that book along with Shawn Crystal on art duties. This issue will be the only one of Scott Snyder’s regular Batman titles to take place during Eternal as the next story arc, title Endgame, begins in October and takes place after the events of Eternal are over. This issue, however, is all about us seeing how Wayne Manor becomes the new home for the inmates of the former Arkham Asylum. We don’t know exactly what happens yet, but recent issues of Eternal have hinted that Arkham is about to become uninhabitable. And there’s that whole saying about “keep your enemies closer,” that’s coming into play along with it. Bruce Wayne will make the decision to convert part of Wayne Manor into the new Asylum, but how good a decision will this be? Especially with all the secrets held within the Manor’s walls (and, you know, underground cave)? If you were curious about the new title in October, this will be a decent sampling of it for you to make a more informed decision to add it to your pull list or skip it. Duggan’s work at Marvel in recent years has been solid, from Deadpool to Nova, so he’s a solid storyteller who might just have a hit on his hands. 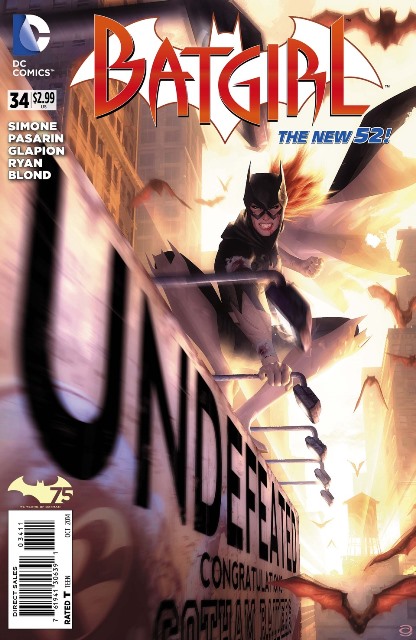 “Deadline” concludes as Batgirl teams with Huntress and Black Canary to stop the evil of Obscura! After everything Barbara has been though to become Batgirl – will she be undone by her demons?

Picked because: Wait, isn’t this the end of the story arc? And Batgirl has never appeared in New Hotness before (a travesty in itself), so why now? While this is indeed the end of a story arc, it also represents the transition to a new creative team. Gail Simone and Fernando Pararin are leaving the title after their Futures End tie-in issue next month (which I don’t count as a larger part of their run since it’s a hypothetical future story and not part of the larger whole in their run). This is the final part of their run and it’s going to set up the move from overly dark and foreboding stories to Barbara making a real change in her life. A lot has happened to Batgirl in Simone’s historic run, and it’s sad to see it come to an end. While Simone herself has said she planned to take the character in a much lighter direction after this story arc, disagreements with an editor (who has since left DC Comics) led her to the decision to leave. By the time the offending editor was gone it was too late to come back, as Simone had committed to another project and a new creative team was in place. Still, this is going to be that moment when things truly shift (along with events happening in Batman Eternal). If you’ve never read Simone’s run on the character, I highly encourage you to find as many back issues as you can and/or pick up the trade collections. It’s some truly great reading.

After last issue’s shocking revelation John Stewart’s world is turned upside down! Is it too late for him to find the truth, or has he started down a dark path he can never return from?

Picked because: John Stewart has been through the emotional wringer lately. After what happened at the end of Uprising, the shock still hasn’t quite worn off. It was an incredible moment that writer Van Jensen and artist Bernard Chang deserve monumental amounts of credit for. That said, what a shot to the heart! Can John not catch a break for once? In any case, he’s teaming up with Von Daggle, the only Durlan loyal to the Green Lantern Corps on a mission to find the real Fatality, who was apparently replaced by a Durlan before the Uprising crossover began. The Corps itself is picking up the pieces after the end of their conflict, but a new enemy is waiting in the wings and, according to the last issue, they’ve been there manipulating the situation for some time. If they have the real Fatality, it’s safe to assume John is going to take the fight to their front door. It’s been too long since John Stewart got such a character-defining run in a GL title, but this is one all of his fans should be happy with. Whether you loved him in his early days or in the Justice League and Justice League Unlimited TV series, this is the book you need to have on your pull list. Jensen has established such a clear and relatable voice for John this book could easily turn someone into a fan with a single issue. In fact, if you’ve never read GLC before, try this one out tomorrow. 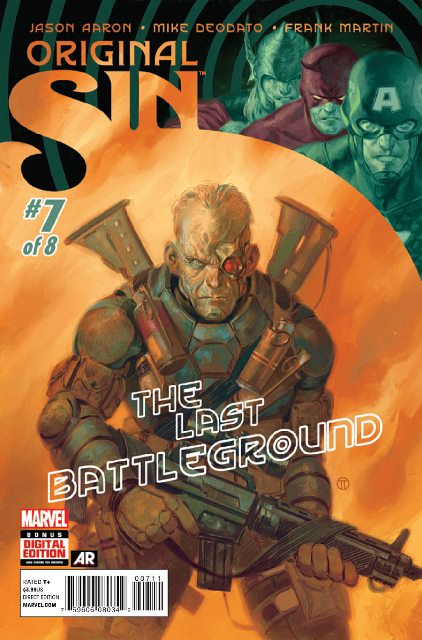 Picked because: This story has been one crazy twist after another and Nick Fury has been at the center of it all. Was he really the trigger man who killed The Watcher? Was it really all about protecting the larger Marvel Universe from oncoming threats or was it just another power play? So many questions remain unanswered. But this book continues to be a crazy, fun ride that’s obviously taking us into the next event, AXIS, but at least now the motivations behind it all are starting to make more sense. If you’re a big Marvel fan and you haven’t been following this story, you’re missing out on one of their better event efforts. Jason Aaron is one of the more character-focused writers in Marvel’s current writer lineup. He’s methodical and knows story structure better than just about anyone in the company, as well. Of course, Mike Deodato’s art can’t be overlooked seeing as this title has given us some of the best work of his career. He’s a near-perfect model for the current Marvel House Style with his vivid layouts and near-painted style, he’s got the ability to move both action and quiet scenes at an insane pace. And with the news this week (Newsarama link) that Apocalypse is returning in AXIS, the threats Fury worried so much about just became quite real, indeed. Things certainly just got a lot more complicated.