It is currently 12:16 AM on Friday, November 22nd. Just like the PS4 last week, I worked the midnight release of the Xbox One tonight. In my last article, I had so much to write about that about half of it had to be cut for the sake of flow. This week, I was worried I wouldn’t have enough to justify writing at all. I am pleased to say that I gathered enough content, but it’s probably not content that Microsoft would want me writing about.

When I arrived at GameStop, I experienced a small degree of déjà vu. As before, the only warm bodies in the store belonged to myself and my co-workers, and the first hour was spent having intellectual discussions with Baker Cat while customers intermittently trickled in the door. However, it was a good 20 minutes before I realized what wasn’t present: Phone calls. Last week, the phone never stopped ringing with people wanting to know if we had received any extra PS4s, but tonight, the store was quiet. During my entire time at the launch, I think the store only received two calls — one of which was to ask about The Legend of Zelda: A Link Between Worlds rather than the Xbox One.

One other major difference this week was the fact that we actually had next-gen console demos set up, which our store has been sorely lacking. I eventually decided to give Baker Cat a break and investigate. I couldn’t help but smirk to myself as I approached; Microsoft and Sony occupy opposite ends of the store, but their demos are sitting shoulder-to-shoulder. I have to imagine this set-up chaps Microsoft’s ass a bit, as there’s a PS4 sitting in Xbox One territory on our sales floor.

I stood between the two demos wondering what sort of treasures awaited me in the next generation, and I arbitrarily reached for the PS4 first. (I found Octodad particularly entertaining, as prior to that moment I’d never accidentally punched a bride in the face with her own wedding ring before.) When I finished, I turned my attention to the Xbox One — only to discover the display had no controllers. Out of instinct, I glanced around my immediate area, wondering if perhaps they’d fallen or been set down elsewhere.

As it turned out, there were never any controllers in the first place. The images dancing across the screen were not a demos at all, but rather, it was a promotional video set to play a loop of advertisements. That’s disappointing enough by itself, but when it’s right next to a playable PS4? That’s just embarrassing.

Or at least, I thought that was embarrassing. The real embarrassment came when I took two steps to my right. 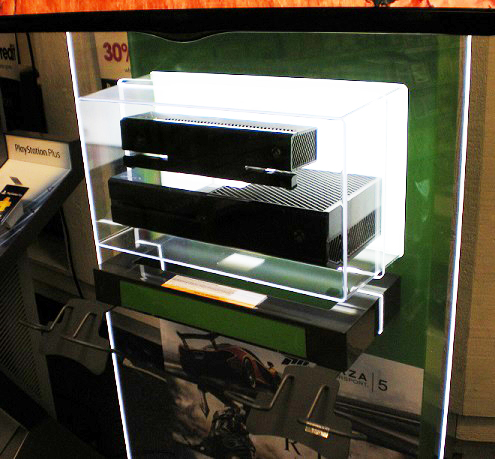 That’s when I realized that the Xbox One display…

…was never going to have playable games at any point in its future. I started laughing, and for a while, I couldn’t stop. Just… look at it. Look at it. Microsoft wasn’t even TRYING to pretend an Xbox One was really there. It makes you wonder why they bothered with the facade at all. They could’ve just sent out the promo video itself for us to play on one of the TVs without bothering with the fake display. Or, if they’d really wanted it for whatever reason, they could’ve made the sides deeper and left it hollow, and no one would’ve been the wiser.

But this? This?? This display is one of the most absurd pieces of advertising I’ve ever seen. Microsoft built a compartment that clearly no Xbox (of any kind) could ever fit into, and then they put controller stands on the front of it. Let me repeat that: A demo case that can never house a working console has controller stands. And of course, the stands are left empty, because why put controllers in them when there’s nothing to play? I don’t know if Microsoft realizes this, but the lack of controllers isn’t going to communicate to customers that it’s unplayable; it’s just going to cause them to ask where the controllers are. Once they’ve been told it’s fake, or they see the display from the side, you do not have a customer that will happily stand back and watch your advertisements in lieu of playing games. What you actually have is a costumer that feels tricked — and furthermore, a customer that’s probably going to turn to the fully-functional PS4 display directly to their left and play that instead.

I have to give them credit for one thing, though. They at least got the pricing right on the old 360’s.

As the clock came around to 11:30, customers began showing up more rapidly, but in total there were less than half as many as had been present for the PS4. I took my place at the threshold to the back room, and as I did last week, I asked the gentleman at the front of the line how it felt to be the first one to receive an Xbox One.

He thought about it for a moment, then shrugged, shook his head, and mumbled, “It’s… It’s okay, I guess.”

The difference in sentiment between this week and last is staggering.

Now, those of you familiar with the previous article may have noticed that I began this story by mentioning it was 12:16, whereas last week I got home in the 1:00 hour. This is because, although we made it through the launch in about the same amount of time (it took us two minutes longer due to having to differentiate between Day One and standard editions), my manager had absolutely no faith that we would get enough traffic to warrant having five employees on-hand and immediately sent three of us home. I was one of the three, which is why I was home writing this literally within minutes of the launch having kicked off.

So, does this mean that the PS4 is going to beat Xbox One in the console wars? Who knows; my store is certainly too small of a sample size to judge any sort of an outcome. However, I will point out that the people that generally bother with getting a reserve (which is not easy to do) and then show up at midnight to claim their prize are typically the most dedicated and enthusiastic consumers. This means that, at least in my area, the biggest-of-the-biggest fans came to our store, and even then the reception was lukewarm. Maybe they’d all been tricked by the fake Xbox One display while they were waiting, too.