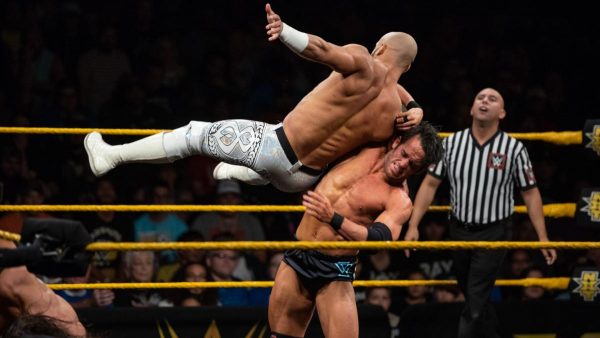 Brian: Seth Rollins vs. Kevin Owens from RAW was a great back-and-forth match for the Intercontinental Title. It was the best match Owens has had in quite some time (since his Last Man Standing match against Dean Ambrose at the 2016 Rumble if you ask me) and the crowd was heavily invested into everything. Before the match he talked about having an awful year and that he was not going to leave the building without the title and proceeded to go all out in this match despite the losing effort and even said he quit before leaving the ring but not before we saw Seth almost give a nod of respect to Owens. All of this seems to be leading to Owens turning face but who knows what will happen next.

Runner up was the 205 Live main event of Buddy Murphy vs. Kalisto. A fast-paced match that gave Murphy some needed momentum as he once again tries to become the Cruiserweight Champion. A match work seeking out.

Jennifer: Adam Cole takes Kyle O’Reilly’s place to join Roderick Strong in this tag match against Pete Dunne and Ricochet. This is an intense and quite emotional match, complete with resounding strikes, non-stop shit talking, and a kick to Ricochet’s face that he sold so well I thought he died. This was a smart way for Cole to get a pseudo rematch with Ricochet. The combo of the U.K. and North American Champions is an interesting one and I hope they have more matches together. Also, Pete Dunne is bad ass. The War Raiders do a run in at the end but honestly I’m kinda more into Undisputed Era vs. The One and Only and the BruiserWeight.

Runner Up was the Daniel Bryan vs. Andrade Almas match on SmackDown. It was unexpected because of Daniel and Brie’s feud with The Miz and Maryse. 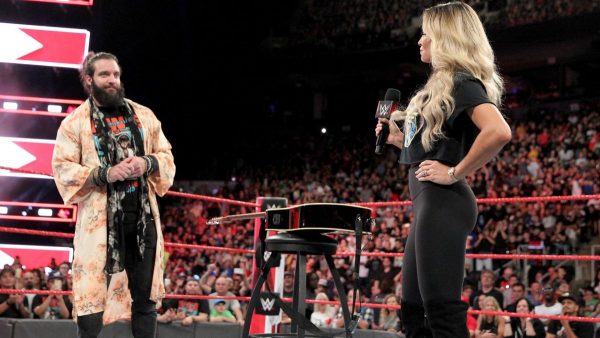 Segments of the Week

Brian: Trish Stratus returning to interrupt Elias to defend her home city of Toronto was a lot of fun. This also led to Alexa Bliss and others coming out but the Elias and Trish interactions were a blast. Elias has the ability to carry segments on the mic by himself as Trish comes off as a genuinely likable person and had full support of the crowd.

Jennifer: King Booker inducts The New Day into the Five-Timers club in royal fashion. He dubs Kofi “the Brave” and Xavier “the Wise” but skips Big E. Which leads to an absolutely delightful bit that I won’t spoil because it needs to be seen. The New Day is pure joy.

Quotes of the Week

Brian: From Elias: “I have to break it to you, Trish. I don’t date women in their 60s.” Best part about that line was Trish immediately slapping him across the face.

Jennifer: “You just went full Saxton on me!” – Big E 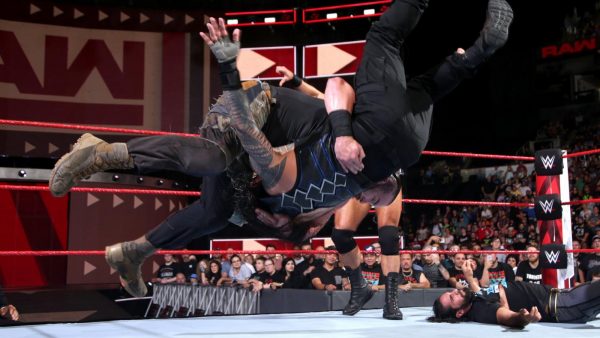 Brian: The end of RAW where they used the rest of the Shield to get sympathy for Reigns was a really smart move by the WWE. Since the crowds love the Shield and to boo Reigns, might as well use the Shield so Reigns is not always booed out of the building, like we saw in the opening segment. The segment also elevated Dolph Ziggler & Drew McIntyre as they were associated with Strowman.

Jennifer: Everything Carmella, Charlotte and Becky! This has been very interesting for me because I legit like all three of these ladies. Carmella’s eye rolls are hilarious and damn it if she didn’t have a hell of a match with Charlotte this week. Mella put in good work but Charlotte’s Figure-Eight made her tap. Becky is tremendously awesome as a heel and seems to be burning all her bridges with Charlotte.

Brian: The Constable Corbin character is just not any good yet they insist on having it become more prevalent on RAW in replacing Angle’s GM segments. And a feud against ice cold babyface Bobby Lashley does not sound appealing. Its a bad look and Authority lackey gimmicks do not usually end well.

Just behind that are the B Team act. The novelty is wearing thin as the crowds did not react to their match at all. Then again, the RAW Tag Team Division is poor and they need to heat someone else up in order to get the belts off of the B Team..

Jennifer: Honestly, both SmackDown and NXT were on point this week. If I HAVE to pick something, I’ll go with Naomi’s loss to Billie Kay.