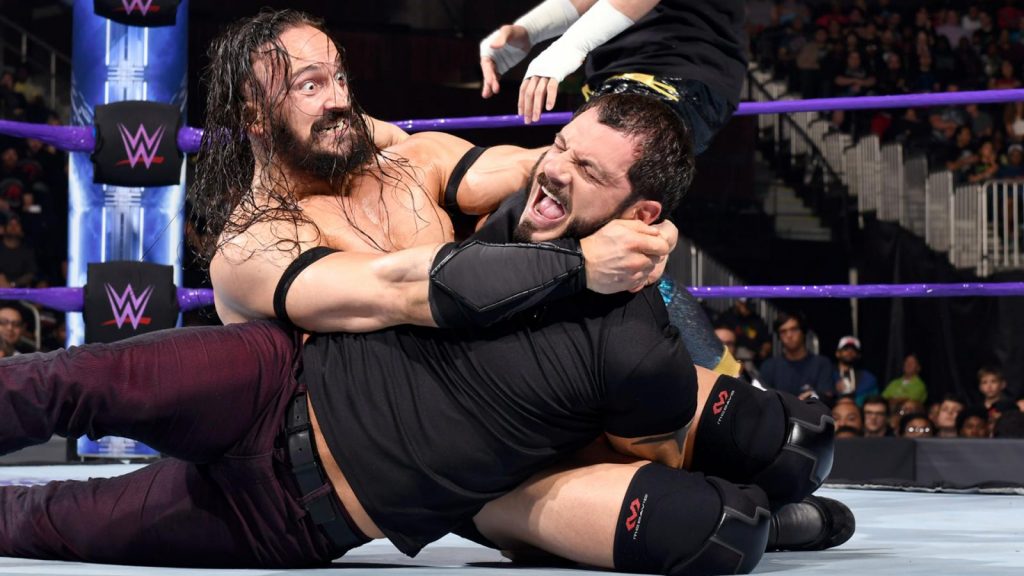 From the Philips Arena in Atlanta, GA

The show opens with a video package on the Neville vs. Austin Aries feud to hype up their submission match this Sunday at Extreme Rules.

Tonight, we will see Drew Gulak vs. Mustafa Ali. Also, they are calling Neville tapping out to Aries last night on RAW in a tag match the “tap heard around the world.”

Noam Dar & Alicia Fox come out to the ring. They tell the fans this is the closest they will get to true love and call Atlanta a “dump” before saying their true love will make them victorious Sunday at Extreme Rules against Rich Swann & Sasha Banks. Swann then comes out with Sasha and says where they are a standing, they’re looking at a hot mess. They start putting over their dancing and fashion and how they will get revenge. Fox disses Sasha’s weave and they have to held back after some more jawing.

Swann fires away to start. Dar bails but Swann follows and throws him into the guardrail as Sasha and Fox yell at each other. Back inside, Swann gets two with a dropkick but Dar fights back and knocks Swann off of the apron. Dar works the arm for a while then rams Swann into the corner. He cuts Swann off with a tackle for a two count then taunts the crowd as Fox celebrates. Dar now works a reverse chinlock but Swann escapes and hits a back suplex as both men are down. Dar goes up top but Swann takes him down with a hurricarana. Swann connects with a spin kick then gets two with a somersault leg drop to the back of the neck. Swann tries a rolling frog splash but Dar got his knees up then covers for two. Swann sneaks in an inside cradle for two but Dar dodges a kick and applies an ankle lock. Swann shoves Dar outside but Fox trips up Swann then Sasha runs over and knocks Fox down. Back inside, Swann misses a charge and Dar hits a running kick for the win (7:49) **.

Thoughts: A bland match as Dar is nothing more than mediocre in the ring and they’ve somehow managed to turn Swann into one of the lamest babyface acts on the entire roster. Plus, the women are the main focus and this feud is doing the Cruiserweight Division zero favors right now.

Backstage, Dasha Fuentes asks Cedric Alexander about Alicia Fox. Cedric says she will get her comeuppance, along with Dar, at Extreme Rules but he did not rehab from injury to care about old relationships.

Hollis is based out of Georgia but has been on NXT several times. These two start off with a nice sequence that ends in a stalemate. Hollis cheap shots Cedric in the corner then tackles his knee before using a stranglehold. Cedric escapes then comes back with a knee smash. He connects with an elbow smash and a handspring enziguiri before hitting a springboard clothesline then hits the Lumbar Check for the win (2:40).

Thoughts: These two had a good match. Hollis is a solid worker who is someone I would like to see more of a look from the larger Independent promotions. Cedric also looks good coming back from injury as his no-nonsense attitude is for the best.

Highlights from last week’s Street Fight between Akira Tozawa and The Brian Kendrick.

Clips from two weeks ago where Drew Gulak attacked Mustafa Ali from behind on the ramp before Ali’s match against Tony Nese.

Ali flies out with a seated senton to take out Gulak before he enters the ring. He snaps his “No Fly Zone” sign in half then rolls him inside. Ali hammers away in the corner then hits a clothesline. Gulak rolls outside after a dropkick then Ali runs off the apron with a knee smash. Ali chops Gulak hard against the guardrail but Gulak fights back. Ali also fights back but gets attacked heading back into the ring. Ali heads up top after a kick but Gulak shoves him down on the floor as Ali grabs his knee. Gulak rolls Ali back inside and attacks the knee then stretches him out. Ali escapes and runs wild and connects with a roundhouse kick. He hits a rolling neckbreaker but his knee starts hurting again as he slowly climbs up top and hits a crossbody but Gulak rolls through and gets the win (4:56) **1/4. After the match, Gulak smiles on the ramp while Ali is frustrated.

Thoughts: The action was fine but I would have had Gulak at least grab the tights or something than win clean. You can still cheat to win in that spot and still preach the “No Fly Zone” gimmick. Anyway, Ali has been very good in the ring and Gulak is starting to show personality in this role.

Dasha is backstage and asks Gulak about his victory. Gulak says he proved that showboating does not work as he won with “efficiency and class” and “high-flying does not pay, staying grounded is the way.” Gulak is pulling this character off well enough.

Austin Aries comes out to the ring. He gets some chants from the crowd then talks about how he social media has been blowing up, and its not because his book is available for pre-order but rather the “tap heard ’round the world.” Aries keeps telling us how Neville, the same person who claims he cannot be stopped, tapped out as we are shown a replay from last night when Aries made Neville tap to the Last Chancery. We then get a closeup of the submission then Aries said everytime Neville was about to tap out he cheated in order to retain his title but Neville interrupts. Neville tells Aries he was lucky last night and is a disease on the face of this show so at Extreme Rules, he will eradicate him once and for all. The crowd starts a “you tapped out” chant then as Neville and Aries stare each other down, TJP attacks Aries from behind. Aries fights him off but Neville knocks Aries down then has TJP hold Aries up so he can kick his knee. Neville slams Aries on the mat and locks on the Rings of Saturn as TJP stomps Aries injured knee until several officials run out and eventually pry Neville off of him. You would have thought Jack Gallagher would make the save for Aries here since these four have been feuding for over a month now but he was nowhere to be seen. The segment was fine but nothing we haven’t seen before from these three.

Final Thoughts: This was a weak show. They built up Aries/Neville enough last night on RAW and did not need a long segment like the one we had tonight. The Gulak/Ali feud is fine and I like how they are putting Cedric back in the mix but the Swann/Dar feud blows and the action was not good. If you want this division to succeed, it needs to be based more on exciting in-ring action and less on Noam Dar & Alicia Fox.