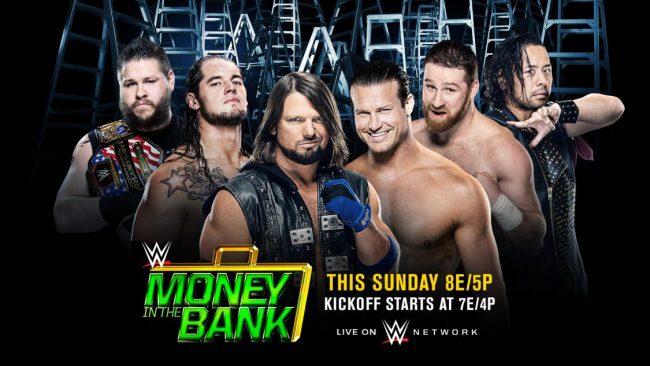 KICKOFF MATCH: THE HYPE BROS VS. THE COLONS

This is Zack Ryder’s first televised match back since returning from injury. With Mojo getting a bit of a push while Ryder was on the sidelines as The Colons are pretty much afterthoughts at this point, I see the Hype Bros winning here and eventually getting a shot at the Tag Team Titles. The Colons winning here just does not make any sense to me. BAYLESS’ PICK: THE HYPE BROS

This is Lana’s first PPV singles match. The conflict between these two is relatively new as well. If the Women’s Money in the Bank Ladder match goes on before this then I really see whoever wins that cashing in immediately and becoming the champion. I think the cash-in will help as Lana has limited in-ring experience too and expect a lot of foolery to take place. In the end, Naomi wins but I expect a cash-in to happen on this show. BAYLESS’ PICK: NAOMI

The New Day have their first Tag Team PPV match as part of the Smackdown Live brand. After a record setting title reign on the RAW roster, I do not see how immediately making the New Day champs again is going to help the Smackdown Tag Team division, which has struggled mightily since the brand split. The team does not need the less than prestigious belts at this point. I could see a scenario in which the New Day win the match but not the titles on something like a countout or DQ though. In the end, I think The Usos win due to cheating but would not be surprised to see them lose in a way that helps them retain the titles, either. BAYLESS’ PICK: THE USOS

WOMEN’S MONEY IN THE BANK LADDER MATCH: BECKY LYNCH VS. CHARLOTTE FLAIR VS. NATALYA VS. TAMINA VS. CARMELLA

This PPV boasts the inaugural Women’s Money in the Bank Ladder match. Typically, the Money in the Bank Briefcase is used to elevate an act rather than go to an established act so for that I do not Charlotte, Becky, or Natalya to retain. That leaves Tamina and Carmella. While being on the roster for several years, Tamina has yet to establish much of a presence. For that, I give her a small chance to win here but my pick is Carmella. She has the relationship with James Ellsworth and she can have him carry that around for a while or even cash in immediately, which I think will happen. Carmella is the fresher act so I think she gets the win. BAYLESS’ PICK: CARMELLA

With the show being held in Orton’s hometown and this company’s knack for having the hometown star lose, this choice almost seems to easy. Actually, take that out of the equation and having Jinder lose here would make his title reign just completely pointless and do more harm than good. Orton is also coming off of a bad run as the champion so I expect Jinder to retain here and drop it sooner rather than later to someone else. Losing to Cena on the 4th of July could be a possibility. BAYLESS’ PICK: JINDER MAHAL

I do expect this match to go on last. There is a lot of talent here too. I do not think AJ or Nakamura need the briefcase and will take them out as possible winners. Owens has the U.S. Title and does not need another prop, either. Ziggler won this match before and cashed in to one of the loudest reactions you’ll ever hear and do not think another run with the briefcase is going to get him over more than he is now. So that leaves Zayn and Corbin. Zayn is still the underdog and that story makes little sense with a guaranteed title shot so my pick is Corbin, who was reported as one of the two (the other being Braun Strowman) that the WWE has been rumored to push heavy this year. Corbin winning can hopefully get him over more so when he cashes in he’ll be in a better position to succeed as champion than he is right now. BAYLESS’ PICK: BARON CORBIN

Check out JT Rozzero’s Pod Blast discussing the main event! And check back Monday for our Reaction Show podcast!