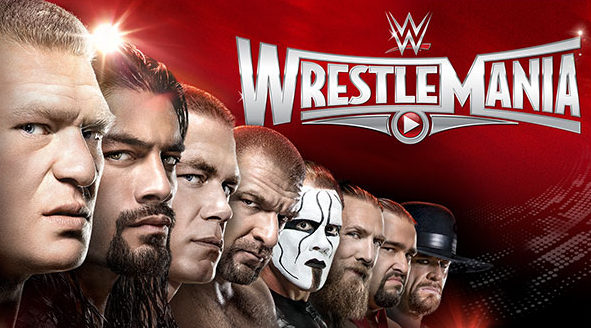 I’m primarily known for Movies and TV, yet something you may not know about me is that I was a wrestler on the Kingston Tigers modified wrestling team. I was absolutely terrible and only won a single match by technicality, but the point is that I have an appreciation for wrestling. Despite my writing for a site for which it is a main focus, i’ve never been an avid fan of the WWE. But that doesn’t mean I don’t like it.

My best friend and partner on my personal website Hassan Jamal and I have a tradition of going to a sports bar every year watching WrestleMania. The first time we went was WrestleMania XXVIII at a Buffalo Wild Wings. I only intended to stay for a brief while but ended up being there for hours. The main match was between John Cena and The Rock. I knew very well who The Rock was, and I had heard the name John Cena in passing. So I stayed, and I had a great time.

The pageantry of the ass whooping was a grand spectacle. The edge of the seat feeling when a wrestler weasels their way out of a pin after the two count by the referee. The apparent lack of rules that occurs when a wrestler grabs a folding chair and smacks their opponent across the face. The commitment to the storylines and personalities that these wrestlers adhere to. It was majestic, with a masculine energy.

I won’t pretend to have any knowledge as to who current wrestlers are, what respective feuds they have with others among the league, or anything that has occurred in the various Raw matches and Rumbles (Royal or otherwise). I know some names. And I’m aware of the unbroken streak (Until 2014) of The Undertaker. But for real knowledge, I defer to the many talented writers of this site.

WrestleMania XXXI. I had called the Buffalo Wild Wings in Poughkeepsie on Tuesday to verify that it would be shown, and on Sunday March 29th, Hassan and I made the trip. We arrived after the 20 minute drive to find out that the event was in fact NOT being screened. I would later discover that this was due to a contract fallout with DirecTV. Disappointed, we stuck around for some wings and a burger to-go (I didn’t drive that far for nothing) and then ventured back to my dorm in New Paltz. Hassan had to part ways due to work in the morning. I wrote an email to the manager, who was very apologetic for the misinformation, and I was sent a coupon for free wings. Not a total loss.

Yet the journey forced me to miss the beginning of the event. Luckily, a friend across the hall was watching a livestream on the WWE Network with my roommate. My other companion and I joined them halfway through he match between Triple H and Sting.

I was rooting for Triple H mainly for the reason that I knew his name. I had an inkling Hulk Hogan would show up at some point during the evening, but I was not prepared to see him join in actual combat at the age of 63. Yet as “our host” told me, this was a reunion of something called nWo. It was a nice surprise, as I never thought I would see Hogan fight live considering I only watch the sport once a year. Somehow the three men coming to the rescue reminded me of the “Turbo Team” attacking Arnold Schwarzenegger in the film Jingle All The Way.

Somehow my gut was right, and low and behold did he win the match. Yet I was surprised by the reaction that he received. I learned that he is actually the villain from my roommate. I’m sure that if I just kept watching, I would have figured out when The Rock and Ronda Rousey came to shut him up. More on that later.

As I’ve mentioned, I’m familiar with who John Cena is, so I would have most likely rooted for him regardless. Yet my roommate’s chanting of “You Can’t See Me” whilst being recorded for Snapchat along with the immense patriotic spectacle with which John Cena entered made the decision easier. The intensely pro-America aura in this match pitted against the freedom reviling Rusev was a classic sight. Almost like Rocky IV. As with most of the matches, it seemed very hard to call despite Rusev dominating most of the match. But Cena (and Democracy) prevailed in a manner befitting such as event.

The Rock was the host of Saturday Night Live the previous night in New York City, so the idea that he made it to San Francisco with enough energy to complete his bit is remarkable. The verbal contests of the wrestling world are almost as electrifying to watch as the actual physicality. As he lays into Stephanie McMahon and Triple H with what amounts to an extended Shut Up, I feel the intensity. They attempt to have him leave with his tail between his legs, he retreats only to return with Ronda Rousey whom I recognize as the female in The Expendables 3. It soon turns the tides in another direction as the two Rs turn words into action. I like how versatile Dwayne Johnson has become. He has the charm to sell himself as a movie star, but still can deliver to a stadium of his wrestling fans. I do indeed smell what the Rock is cooking. (Did I use that right?)

Away from my naivete, I was well aware of The Undertaker’s legacy. So at the last WrestleMania, I fully expected him to emerge victorious, and like the rest of the world, and especially THAT guy, I was shocked to see him lose.

This year, all bets were off. I had no idea who would win. Somehow I expected that he would emerge victorious against Bray Wyatt, and he did. It seemed very give and take, but I was glad to see that he managed to pull it off.

And who can forget about Roman Reigns versus Brock Lesnar? Depends on if you see actually got to see it.

The main event kicked off with much debate amongst ourselves as to who would win. Lesnar was the reigning champ, and Reigns was being billed as the underdog. It seemed pretty evenly matched for the longest time, despite the bloody faces. I won’t claim wrestling is fake or isn’t. But wherever you sit on the subject, you must admit Lesnar can take a beating. It seemed that Reigns was going to win. And then…..

Our feed cut out. We panicked! We were missing something big. We scurried to get the feed back and when we did minutes later, we saw….Seth Rollins holding the belt? What the hell?

It was clear that something had happened, but what the hell?

It took about 15 minutes for us to get the full picture and rewind to where we cut out. Apparently Rollins used a briefcase which allowed him to intervene in the match and take the belt. Now that I saw it, it seemed to make sense, but having cut out with Reigns about to claim victory and be thrown into an image of Seth Rollins prideful and championistic, you can understand my confusion.

It was a great WrestleMania to watch; if only I got to see it all as I originally intended. Yet the mishaps made it that much more of an interesting story to tell. I can only hope that next year, we have a better plan in place.