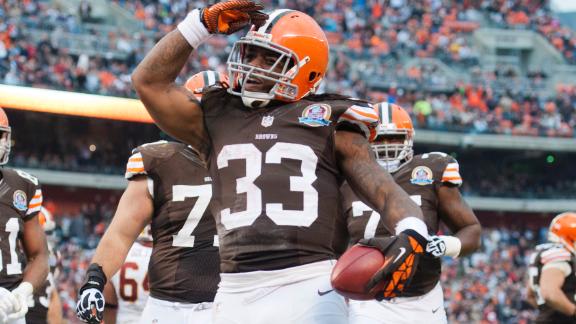 Rare is the NFL midseason trade.  Rarer still is the trade that involves a young, star player.  The football world reacted with great surprise as it was announced that the Cleveland Browns unloaded Trent Richardson, the 3rd overall pick in the 2012 draft just 18 games into his NFL career to the upstart Indianapolis Colts for a 2014 1st Round pick.  Luckily, Place To Be Nation put the “Cowboy” on the case to break this one down for you.  After having 24 hours to digest this shocker, here are my thoughts:

What was Cleveland thinking? Are they tanking the season?

The Browns have been getting killed in the media for this deal.   At first glance it appears that they are in the constant state of “rebuilding” that befalls many a downtrodden franchise.  Richardson appears to be a true “feature back” in a league mostly devoid of them.  He’s a brutish inside runner with the ability to tote the rock 25 times a game and catch passes out of the backfield.  This is truly a rare breed in today’s NFL.   He certainly doesn’t fit the mold of a player that a franchise would give up on so quickly into his NFL career.

With that said, I actually think this is a great move for Cleveland.  They are obviously going nowhere this season.  Their offense has managed a paltry 16 points through two games with Richardson at full strength.  How much worse can they really be without him?  Also, the new regime in Cleveland is clearly not sold on 30 year-old second year QB, Brandon Weeden.  The 2014 draft is loaded with talent at the QB position.  The main prize is Louisville stud Teddy Bridgewater, who is expected to go #1 overall.  Other first round prospects include UCLA’s Brett Hundley, Oregon’s Marcus Mariota, and the immortal Johnny Manziel from Texas A&M.  In the NFL today you can’t win without good to great quarterback play and the Browns are aware of this.  By trading Richardson they accomplish two things: First, they add a very valuable 1st round pick to their war chest, presumably to get their QB of the future.  Second, they weaken the 2013 version of the team enough to ensure that their pick will be no lower than 5th.  So in a way they are tanking this season, but I believe it makes sense for them.  Why go 7-9 with Richardson when you can go 4-12 (or worse) and load up for the 2014 draft without him.  The Cleveland fans are a notoriously tortured group but, in this case, giving new head honcho Mike Lombardi the benefit of the doubt and exhibiting some patience will pay off in the end.

How does Trent help Indy? Did the Colts give too much?

There’s no other way to say it: Richardson is a massive upgrade at RB for the Colts.  He is light years better than the current version of Ahmad Bradshaw that the Colts are featuring.  He provides Andrew Luck with a valuable safety valve out of the backfield and will force opposing defenses to respect the Colts running game for the first time in Luck’s tenure.  The Colts are taking a “win now” approach with this move and are proving that they will go to any lengths necessary to provide Luck with the weapons he needs to bring Indianapolis back to Super Bowl glory.

There is significant risk in this deal for the Colts.  There are many teams in the league who would not deal a 1st round pick for ANY running back, let alone an unproven second year man who has averaged a meager 3.5 yards per carry for his career.  With late round picks and undrafted free agents such as Arian Foster, Alfred Morris, and Jamaal Charles becoming star tailbacks, the prevailing school of thought is that the position is fairly easy to fill without having to use a premium draft pick.  Also, Richardson has a bit of a checkered injury history dating back to his days at Alabama.  Realistically, the Colts are one bad hit away from being right back where they started sans their 2014 1st round pick.  Also, the Colts were every statistical guru’s first choice as the luckiest team in the NFL last year.  Their 11-5 record could very well be a mirage and not indicative of the team’s true abilities.  If this is really an 8-8 roster, does the addition of Richardson truly make them a Super Bowl contender?

It will be very interesting to see how this all plays out in the coming weeks.  Maybe Richardson will be the missing piece the Colts needed to take the AFC by storm.  Maybe the Browns, with new addition Willis McGahee, will find a way to be competitive.  Either way, rest assured that the “Cowboy” will be tuned in and ready to break it down for you.