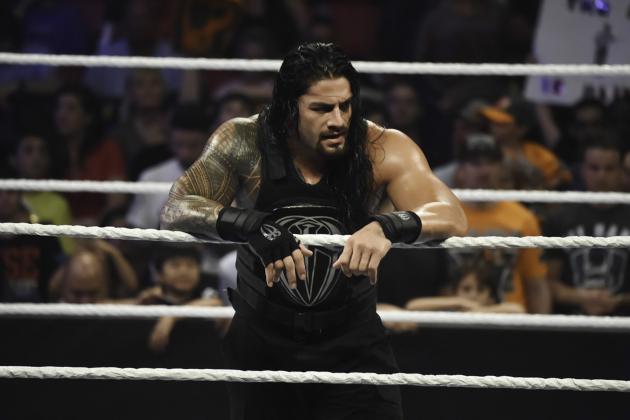 It’s seldom that modern WWE elicits more in me than a shrug, but seeing Roman Reigns booed out of the building on Sunday – while AJ Styles, a guy who had previously only had half a cup of coffee in WWE (in 2002), got a raucous reaction – affected me. It made me wonder why such a talented guy as Reigns was failing to get over to such a ludicrous extent. And it made me kind of sad to see booking go so wrong.

In the current kayfabe, the storyline, as I understand it, is that “the Authority” led by Vince McMahon and Triple H have tried to screw Reigns at every turn. Outside of kayfabe, if we think about WWE Creative … led by Vince McMahon and Triple H … it is also the case that they have screwed him at every turn. So why do the fans boo? Is it because they think that Roman Reigns is being shoved down their throats at the expense of their favourites, or is it because he’s been booked into a position where he was always going to get booed?

In this article, I am going to argue that it is far from the case that he has been shoved down the fans’ throats, because if Vince McMahon really was hell bent on making Roman Reigns his top star, he would have booked this very differently. To make this argument I am going rest strongly on a central premise:

That, regardless of the time or place, wins and losses matter in pro wrestling.

Some might demure at this claim. They might tell me that the landscape in 2015 is very different from the landscape of the 1970s and so the same general principles cannot apply. Historical precedent over the years suggests otherwise. The 1990s presented a very different time and landscape for pro wrestling from the 1970s. Ask Lex Luger if wins and losses matter. He could never beat Ric Flair for the title, and the NWA / WCW fans always saw him as a choker afterwards. He also failed to beat Yokozuna for the World title at Summerslam 1993, and the WWF fans always saw him as a choker afterwards. Poor old Lex, he didn’t get the breaks. And seemingly Vince lost faith in him. Fast-forward to 1998 when Bill Goldberg was presented as having won 173 matches in a row. Did the wins not matter? Did the loss to Nash at Starrcade matter? And did it matter a year earlier when Sting lost to Hulk Hogan? I was around in 1998, and even though it was in its early AOL-led 56kb phase, the internet existed back then. So-called smart fans attended wrestling shows, and they frequently let their voices be heard too. Let us fast-forward again to Wrestlemania 30, the Undertaker had never been defeated, and the world was shocked and awed by seeing Brock Lesnar get a fall on the old man. Did the win not matter in 2014?

The topic of Brock Lesnar is an interesting one – he might look like a very modern phenomenon, but in fact, if you think about it even for a second, his story is not at all uncommon in wrestling. The Crusher, Dick the Bruiser, The Road Warriors, Stone Cold Steve Austin: what do all of these guys have in common? They were arse-kicking heels who were turned babyface by crowds because … well, crowds have a habit of marking for arse-kickers who steam-roll opponents. Other acts like The Steiner Brothers skipped on the heel phase entirely, they just broke necks for a living and how the fans lapped it up. How Dave Meltzer himself and the legion of so-called smart fans at the time LAPPED it up. Is Brock Lesnar today really much different? His star might have been raised by his UFC career, but the Steiners were always sold on their legit amateur credentials. “UFC” is the “amateur credentials” of today. The bottom-line is that fans love arse-kickers who destroy opponents. The point is that all of the people I mentioned from Dick the Bruiser to Brock Lesnar got over like rover through winning lots of matches.

Let me get back to Roman Reigns. I want to compare the way that Reigns has been booked since he was first tipped to be the new “man” after winning the 2015 Royal Rumble to now a year later to two historical examples of similarly “hand chosen” guys who were pushed to be the “new” top man. Namely, I am talking about Dory Funk Jr in 1969 and Bob Backlund in 1978.

The parallels between Dory and Bob and Roman are not immediately obvious, so let me flesh them out:

In February 1969, Gene Kiniski had been the champion for a good while, just over three years to be precise, after beating Lou Thesz in January 1966. At 41, he was getting old and the schedule for the NWA champ in those days was gruelling. Kiniski had really been just a stop-gap champion plugging the void left by Thesz. Sam Muchnick, the long-time NWA President, wanted a new, younger champion who could get over the credibility of what the NWA World Heavyweight title meant. Dory Funk Jr was very well placed. He was 28 years old (a year younger than Reigns in 2015), and worked a technical style that Muchnick favoured. More importantly, his father, Dory Funk Sr. was the owner of the Amarillo promotion and held a lot of political sway in the National Wrestling Alliance. It is fair to say that Dory Jr was not blessed with good looks or with any discernible charisma. But his father made him a huge star in Texas, first through a rub – tagging him with the biggest star in the territory (Dory Sr himself) – and then through a lot of wins. By the time he was 28, Dory had years of experience under his belt. But outside of Amarillo, he was hardly a household name. And fans were not exactly clamouring for an extended Dory Funk Jr run with the title. But Sam Muchnick didn’t care about that. The NWA had voted and they had gone with his own hand-picked choice to succeed Kiniski. I will return in a moment to how Muchnick booked him in the first year of his run.

In February 1978, Superstar Billy Graham had been the WWWF champion for about ten months. Graham was only ever a placeholder for the belt while the successor to the long-time champion Bruno Sammartino, then 43 years old and slowing down, was being groomed. That successor was, of course, Bob Backlund. Vince McMahon Sr., the long-time promoter of the WWWF, wanted a new, younger champion who could get over the credibility of what the WWWF Heavyweight title meant. Bob Backlund was very well placed. He was 28 years old (a year younger than Reigns in 2015), and worked a technical style that McMahon favoured. He also had political backing. He had been trained by the Funks in Amarillo, and came with the highest recommendations possible from Vince Sr’s long-time friend, Eddie Graham, the Florida promoter who held a lot of sway in the National Wrestling Alliance. It is fair to say that Bob was not blessed with good looks or with any discernible charisma. And fans were not exactly clamouring for an extended Bob Backlund run with the title – in fact, quite the reverse, they had been giving the heel-champion Billy Graham babyface pops for months. But Vince McMahon Sr didn’t care about that. He had hand-picked Bob Backlund to be his new champion to succeed Sammartino. I will return in a moment to how Vince McMahon Sr booked him in the first year of his run.

Hopefully, by now, you will be able to see some parallels forming between Dory, Bob and Roman. In 2015, Reigns was about the same age as them (28-9), and seemingly hand-picked by the long-term boss for the task of succeeding the long-term champion (i.e. John Cena, in his late 30s, but with injuries piling up and a lot of ring miles under his belt). With this established, I want to look first at how Dory was booked, then at Bob, then at Roman.

As I said, in 1969 Dory Funk Jr was hardly a household name around the country, or indeed the world. He wasn’t an unknown: he had been a big star in Amarillo and also made some high-profile TV appearances in Detroit for the The Sheik’s Big-Time Wrestling show. But he wasn’t a name like Buddy Rogers, Lou Thesz, Antonio Rocca, or Freddie Blassie that those outside of wrestling fandom might have heard of. And, as I said, he was not the most charismatic of wrestlers. Unlike his younger brother, Terry, who of course would become an NWA Champion in his own right, he was quiet and soft-spoken in his promos. Dory did all his talking in the ring, and like many in the 1960s, he worked a technical and methodical style. Coming from Texas and being a Funk, he could brawl and bleed with the best of them if he needed to, but most of the time Dory was going to concentrate on twisting guys into pretzels. But it’s not a natural recipe for becoming one of the top drawing NWA champs of all time. So what did old Muchnick do?