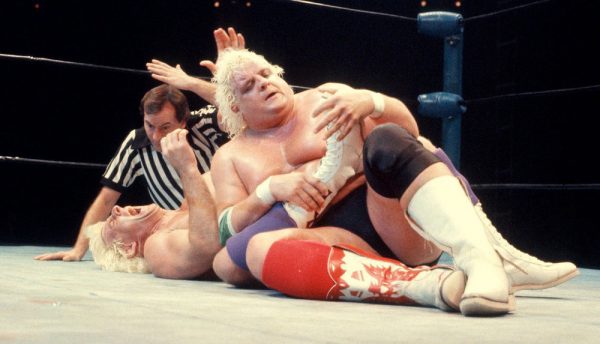 Brian, Chad and Parv unite for the first three-man edition of Where the Big Boys Play to take on Starrcade 85. In this episode: Chad recounts the memories of his father- and brother-in-law of being at The Omni half of Starrcade 85 and talks about the importance of the Omni to the Atlanta area in general, the gradual transition from Charlotte to Atlanta of JCP / WCW, Sam Houston: stupidest babyface we’ve seen so far?, Brian explains how baldness can make you — or at least Barry Darsow — look bigger, Parv can’t substantiate the rumour that the ring announcer at The Omni is former AWA play-by-play man Rodger Kent, Manny Fernandez’s wild delusions of grandeur, Parv rants about Paul Jones’s lack of managerial acumen, and the missed opportunities of Buddy Landel’s career, more talk of Baby Doll’s importance to Tully’s phenomenal 1985, David Crockett shouting “SHE LIKES IT” as Magnum TA steals a kiss, discussion of where the Magnum TA vs. Tully Blanchard “I Quit” match will rank in the eventual DVDR 80s project JCP set, Chad’s manlove for the Boogie Woogie man escalates even further, Brian is taken out by the raging Pittsburgh thunder storm, analysis of Flair and Dusty’s chemistry (or lack of it) and end of show awards.