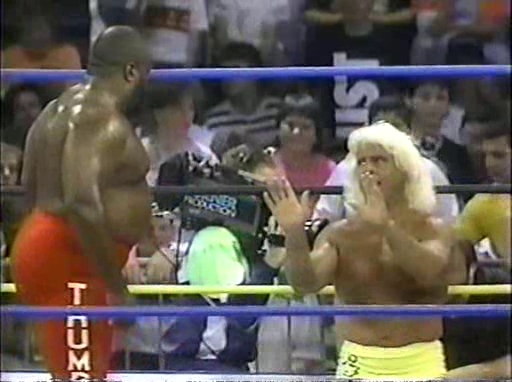 Chad and Parv review Clash of the Champions IX: Coastal Crush. In this show:

– [3:52] Wrestling Observer roundup from May to June 1990, with talking points including: Ole Anderson’s policies and signing as the new booker, talk of Vince McMahon buying WCW in 1990 (!), thoughts on the JYD-Horsemen racism angle, Cactus Jack quitting WCW, and lots more.

– [00:35:08] Clash 11 review, including one of the strangest segments ever as Gary Michael Cappetta interviews El Gigante in Spanish, El Gigante’s spacial awareness, some unique matchups, and JR’s father’s nerveholds.

PTBN’s Main Event – Episode #175: Around the Horn, from Against All Odds to Hell in a Cell

Highway to the Impact Zone #27

Battlestar In The 25th Century #10