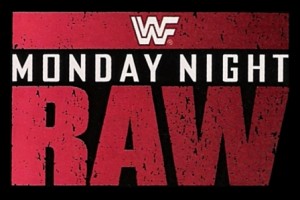 –A video package recaps all the major happenings on last week’s show:  Steve Austin and the Rock fighting for the WWF title and Ken Shamrock joining the Corporation.

–Jim Ross and Jerry “The King” Lawler are doing commentary and they are taped from Columbus, Ohio.  Ross lets us know that Austin suffered a blackout in San Jose, California at a WWF event.

–Vince and Shane McMahon and the stooges come out.  Vince says he had nothing to do with the Undertaker’s attack on Austin at the end of last week’s show.  He says he is naming a new WWF commissioner in order to please the fans and that this new commissioner will not answer to him unless it deals with Austin.  Vince then goes into 1996 mode in welcoming out Shawn Michaels as the new commissioner, which gets a mixed reaction.  Michaels proceeds to book a WWF title match between the Rock and X-Pac, which shocks Vince, and Michaels gives the D-Generation X crotch chop on his way out.  Having Michaels back adds some extra energy to the show, so this was a good booking decision.  1 for 1

–Kevin Kelly interviews the Insane Clown Posse and the Oddities.  The ICP is facing the Headbangers tonight, but the ICP says that they are not ready to wrestle, so Kurrgan and Golga need to take their place.  Kurrgan and Golga accept.

The Headbangers really need to do something different now in light of their heel turn.  They are sporting the same look and doing the same act.  Golga has also started doing this weird move where he pulls his shirt up before doing a corner splash, which somehow makes the move more dangerous.  You do not have to be a genius to see a heel turn coming from the ICP here – for the second time in a month – as Violent J gets knocked off the apron by Golga, which leads to the finish.  After the match, they beat down the Oddities and cut Luna’s hair.

–A video package chronicles Kane’s recent path of destruction, highlighting how he tried to set the Brood on fire several weeks ago.

–Steve Blackman beats The Blue Blazer with a pump kick at 2:57:

The Blazer gets a pop coming out, although the volume of the commentary makes it tough to decipher if it is genuine or piped in.  It is clear early in the match that the Blazer is not Owen Hart because he does not hit the right octave on Owen’s “woo!”  He also botches the enziguri.  Blackman wins a messy bout, but when he goes to unmask the Blazer he gets attacked by Owen Hart.  So who is the Blazer?!?!

–Footage is shown of Austin blacking out at a house show in San Jose, which Ross says was a byproduct of getting hit in the head with a shovel by the Undertaker on last week’s show.

Low midcard act or not, the Brood still had arguably the best entrance in the company at the time.  Gangrel and Edge showcase some nice double team moves, including a double DDT off the second rope, but their timing needs work.  Ross makes sure we know that Henry is a “400 pounder who can dunk a basketball.”  D-Lo nearly botches his running powerbomb on Edge, another warning sign that he needed to eliminate that move from his arsenal.  Everyone tries really hard in this match to get over, incorporating some fun moves, but Gangrel’s sloppy ring work is exposed relative to the other three guys.  This match gives us our second distraction finish of the night, as Chyna comes out and distracts Henry.  Rating:  **½ (2 for 2)

–After the match, Chyna says she will go on a date with Henry and Henry falls to the canvas in joy.  He gives D-Lo a hug and in a nice touch, D-Lo screams because of his “chest injury.”

–Steve Austin tells doctors at the medical facility that he is tired of being there, but they tell him he has a severe concussion and needs to take a few weeks off.  He is given a sedative and is told he can leave the facility in the morning.

–The Undertaker nailing Austin with a shovel, with added sound effect, is the JVC Kaboom! of the Week.

–Shawn Michaels is shown talking with D-Generation X, carrying on like old times.

–Goldust wrestles “Marvelous” Marc Mero to a no-contest at 3:57:

Mero no longer has Jacqueline by his side because he fired her on Sunday Night Heat after she accidentally cost him a match against the Big Bossman.  These two cannot seem to have a match without women involved as Terri Runnels struts out to the ring in a skimpy outfit followed by Jacqueline.  Goldust sets Mero up for Shattered Dreams, but gets low blowed by Jacqueline and Terri comes in and finishes the move on Mero.  This is the beginning of Terri and Jacqueline’s PMS faction, which gave us Meat.  Sad to see two guys of Goldust and Mero’s caliber wasted like this.  Rating:  ** (2 for 3)

–Steve Austin signs an autograph for one of the medical attendants and tells Ross that the Undertaker has hell to pay and is not going to make it to the Buried Alive match at Rock Bottom.

–The end to the WWF title match on last week’s RAW is the Glover Rewind segment.

This match came from last week’s show when the Bossman and Shamrock prevented Mankind from getting to Vince McMahon in the main event.  This is one of those “conspiracy”-style matches where it is a de facto handicap match designed to take Mankind’s Hardcore title.  Things look bleak for Mankind before the JOB Squad comes to his aid and help him pull out the win.  These Hardcore matches were more fun than later incarnations because it was before the genre became really cartoonish with weapons.  Rating:  *** (3 for 4)

–After the match, Mankind tries to go after Vince McMahon on the ramp, but gets attacked by Shamrock and the Bossman.

–Footage shows a hearse outside of Austin’s medical facility.  The Undertaker and Paul Bearer then smother Austin with chloroform.  The Undertaker tells Austin that he is about to go on his last ride.  After the commercial break, the Undertaker and Bearer put Austin in the hearse and speed away.  How they got his body through security I have no idea.

The light heavyweight title has not been defended on RAW in ages.  Christian manhandles Gill, but makes the cardinal sin of continuing to pick his shoulders up off the mat, which he ends up regretting later when the JOB Squad intervenes.  If the light heavyweight title had any credibility it was gone after this match.  As a side note, Gill would remain champion until briefly returning to the company to job it to the debuting Essa Rios in February 2000.  That match was where Lita immediately drew all the attention away from Rios by giving Gill a moonsault after the bell.

–Michael Cole interviews Gill, who enjoys a piped in crowd pop as he says that this victory is one of the greatest moments of his life.

–The hearse stops in a deserted field where an empty grave is located.  Paul Bearer commands the Undertaker to dig the grave deeper.  Steve Austin stirs back to life to try attacking Bearer, but the Undertaker puts him in a chokehold and they reapply the chloroform.  The Undertaker decides that burying Austin alive is too good for him, so he decides to embalm him instead.

–The next match is scheduled to be the Godfather-Tiger Ali Singh, who used to have a feud going that has been forgotten about.  Before the bell, Stephen Regal urges Singh not to take the deal with the hos and they double team the Godfather before Val Venis makes the save.  This gives us the origin of the “Supply & Demand” tag team.  Oh, and Venis also gets the hos because he evened the odds.  For some reason I think that would still not muster John Cena to make a save on a show today.

–Shawn Michaels is shown arguing with the Corporation yet again.  After the commercial break, he also talks with Earl Hebner, probably in a nod to Montreal.

The crowd has a lot of energy for this match, working up an “O-H-I-O” chant and reminding the fans at home that “Michigan sucks.”  A camera edit gets rid of a botch, but aside from that this match is pretty good.  We get yet another run-in finish, though, as Mankind interferes as payback for the JOB Squad helping him out earlier and gives them a win over the tag team champions.  Crowd was not happy with the finish.  So, does this mean that the JOB Squad “are in contention” for a title shot now?  Rating: ** (4 for 5)

–After the bell, Ken Shamrock and the Big Bossman hit the ring to beat up Mankind and the Outlaws beat up the rest of the JOB Squad.  The stooges then try to recruit the Outlaws into the Corporation after the match, talking to them as they head to the back.

–The hearse pulls up to a funeral home.

–The Undertaker puts Steve Austin on an embalming table.  After commercial, the Undertaker tells Austin that he is going to experience the worst pain of his life.  The Undertaker chants a lot of stuff in tongues, but when he goes to stab Austin, Kane breaks in and makes the save.  Bearer tries to finish the job, but Austin blocks him and crawls away.  This was interesting and kept viewers following the show, but how did Kane find out Austin was abducted?  That is a plot hole I cannot overlook.  4 for 6

–WWF Championship Match:  The Rock (Champion) defeats X-Pac with the Corporate Elbow at 8:32:

Shawn Michaels gets rid of the seconds for both men, making this a one-on-one encounter.  On paper, one would think this was a great chance to keep building X-Pac as a talent worthy of the upper midcard and put over the Rock as a heel, but they have to rush lots of this because of time.  It really picks up during the last three minutes, with some near-falls that the crowd completely buys into.  Ross’s commentary helps with that.  But what would tonight be without one last twist, especially with Russo booking, so Michaels takes a chair from the Rock and blasts X-Pac, thereby putting the Rock over.  Rating:  **½ (5 for 7)

–After the match, Michaels celebrates with the Corporation as the New Age Outlaws brawl with The Big Bossman and Ken Shamrock.

The Final Report Card:  I could have done without many of the distraction and run-in finishes on this show, but at the very least they advanced some new stables and angles.  We can debate whether those new stables and angles were any good, but they did give the show some positive momentum.  Some criticized the HBK turn at the time, saying that they burned through it way too fast, but just going with the flow of the storylines, I do not mind.  I guess I am just a fan of the crash TV model in some respects, but I can see where some people would hate this show if they never cared for the Austin-Undertaker feud, hated the HBK heel turn, and/or hated PMS and the JOB Squad.  I really miss the crowd dynamics of some of these shows as well, as the WWF staged several of them in college towns and RAW came off as a party and celebration more than a wrestling show.  We do not get that anymore outside of NXT (and little wonder that people actually like it).