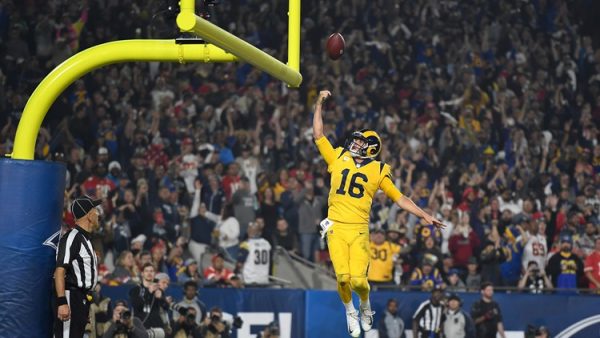 “The turnovers just changed the game… I think I gave them 21 points, pretty much, through turnovers.” – Pat Mahomes

Thanksgiving weekend is upon us as we take a couple of days to recover from Super Bowl 5150 on Monday night. The Chiefs were the first team to score more than 50 points in a defeat as LA and KC combined to score more touchdowns than the Bills have all season. Kareem Hunt matched a 57 year old record with his seventh receiving TD to match his seven rushing TDs. Patrick Mahomes showed maturity by taking responsibility for the loss due to his turnovers. Both he and Jared Goff are so unaccustomed to getting hit that the rare times they do it leads to turnovers. Samson Ebukam of the Rams and Allen Bailey of the Chiefs made highlight defensive plays amidst the offensive flurries by both teams. There is still a lot of work for both to be done on the defensive sides to get by more balanced teams like the Saints, Steelers and Patriots before booking a February rematch in Atlanta.

4 Up, 4 Down: A look into four Surprise teams and four big disappointments: Ups first…

Indianapolis: Frank Reich has changed the culture in Indy aided by the return to health of his franchise QB Andrew Luck. A brutal OT loss to the Texans and an ugly defeat to the Jets didn’t derail their season as they are still in the hunt at 5-5.

Houston: A gutty road win in Washington continues the most improbable winning streak. Lamar Miller is contributing to a more diversified offense not solely reliant on DeShaun Watson.

Washington: Alex Smith’s injury is not necessarily a season ender for the Redskins as their wins have come through their solid defense and toughness. Colt McCoy was effective under Jay Gruden in 2014 when he last saw extended action including an upset in Dallas as the duo look to repeat that magic on Thanksgiving.

L.A. Chargers: A brutal loss at home to Denver puts a stain on this surprise record as the Chargers blew a golden opportunity to tie the Chiefs for the division lead. Clock mismanagement by Coach Anthony Lynn and a couple of brutal picks by Philip Rivers did them in as a rough schedule after this week’s Arizona bye will see them struggle to secure a wild card spot.

Jacksonville: Jalen Ramsey did step up with a great game vs. the Steelers but Blake Bortles’ limitations coupled with a weak offensive line have buried their preseason hopes along with a couple of no shows by their overhyped defense.

Atlanta: Injuries and inconsistent play week-to-week have hurt them, typified by the pass through Calvin Ridley’s hands that resulted in a Cowboy interception in the key play of another soul crushing loss.

Green Bay: Mike McCarthy’s decision to punt the ball to Seattle late in the fourth quarter likely sealed his Packers coaching tenure as Aaron Rodgers never got a chance to touch the ball again and save his coach’s job.

Philadelphia: Too many injuries to overcome, although every team battles them and the great ones have the depth to fight through it as opposed to the one hit wonders. They still haven’t recovered from the fourth quarter home collapse vs. Carolina.

“I think you go for two on the road to win the game. That’s what I did at the end of the day. What’s to say the coin toss is going to go in our favor or we’re going to stop them. So why not go for two?” – Ron Rivera