“…..Whosoever holds this hammer, if he be worthy, shall possess the power of… Thor”
—inscription on Mjolnir

“There must always be a Thor.” —unrevealed female who then lifts Mjolnir and becomes Thor

Hi, friends, and welcome to another installment of Weber Has Issues, where I examine new comics and determine how easily they can be digested by new readers. Today I’m looking at Marvel’s much-ballyhooed new “Thor #1”.

When Whoopi Goldberg announced on ABC’s “The View” back in July that Marvel would soon replace their iconic character of Thor with a female version, reactions were mixed. Personally, I feared the worst–that this was a change simply for change’s sake and a headline-grabbing publicity stunt. Once I learned that Jason Aaron, the writer and architect of the epic recent 25-issue volume “Thor: God of Thunder” was staying on for the new character’s adventures, my worries were eliminated and I decided to hang on and enjoy the ride. Here’s my (mostly) spoiler-free look at the debut of a new Thunder God. 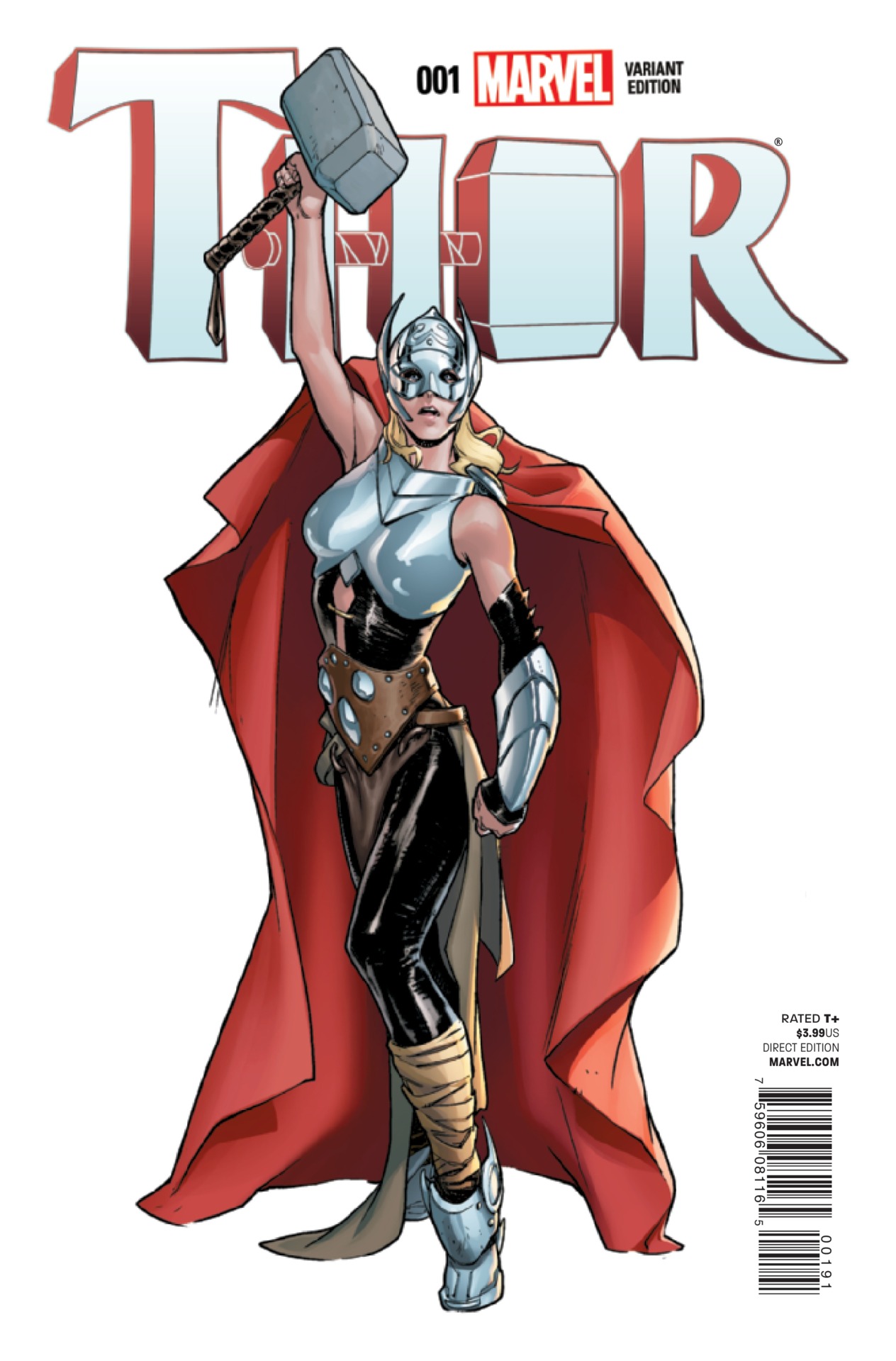 “Thor #1”, ($3.99, Marvel Comics, written by Jason Aaron with art by Russell Dauterman) starts here on Midgard in the depths of the Norwegian Sea. Marvel’s longtime morally ambiguous corporate energy company Roxxon is exploring the waters near their submerged drilling platform, when they stumble upon blue-skinned humanoid behemoths. Ah, the Frost Giants (recently seen on my Xbox 360 in “Disney Infinity 2.0”) are back on Earth but under the sea. Roxxon dispatches their defenses (including SHARKS with FRIGGIN’ LASER BEAMS on their heads) to ward off the invaders, but the Frost Giants prevail.   Meanwhile, on the Moon, any and all Asgardian citizens of note are trying to console a despondent Thor, who can no longer lift his hammer Mjolnir. What happened? Why is the Odinson suddenly unworthy? In Marvel’s recent “Who murdered the Uatu the Watcher” mini-series “Original Sin”, Nick Fury (the David Hasselhoff one, not the Samuel L. Jackson one—if you smell what W.H.I. is cooking) whispers something into Thor’s ear that suddenly makes Thor’s ability to use his hammer suddenly vanish. What could Fury have possibly told Thor? Methinks it’s a Loki plot, but your mileage may vary.

Thor’s family and friends attempt to help him recover his hammer (and even Odin himself attempts to lift it) but Mjolnir doesn’t budge. Thor’s parents grumble amongst themselves before word of the Frost Giants’ invasion reaches them and they decide to rendezvous to the newly-christened “Asgardia” (which appears to be an..asteroid?)

I really appreciated the characterization of Thor’s mother Freyja (incidentally played in the movies by Rene Russo–and you should really see “The Thomas Crown Affair”) and Aaron gives her a demeanor and spark that make an excellent contrast to the salty all-father Odin. Freyja over the years has been a criminally-neglected character, and we may be seeing a great deal of her in “Thor”. 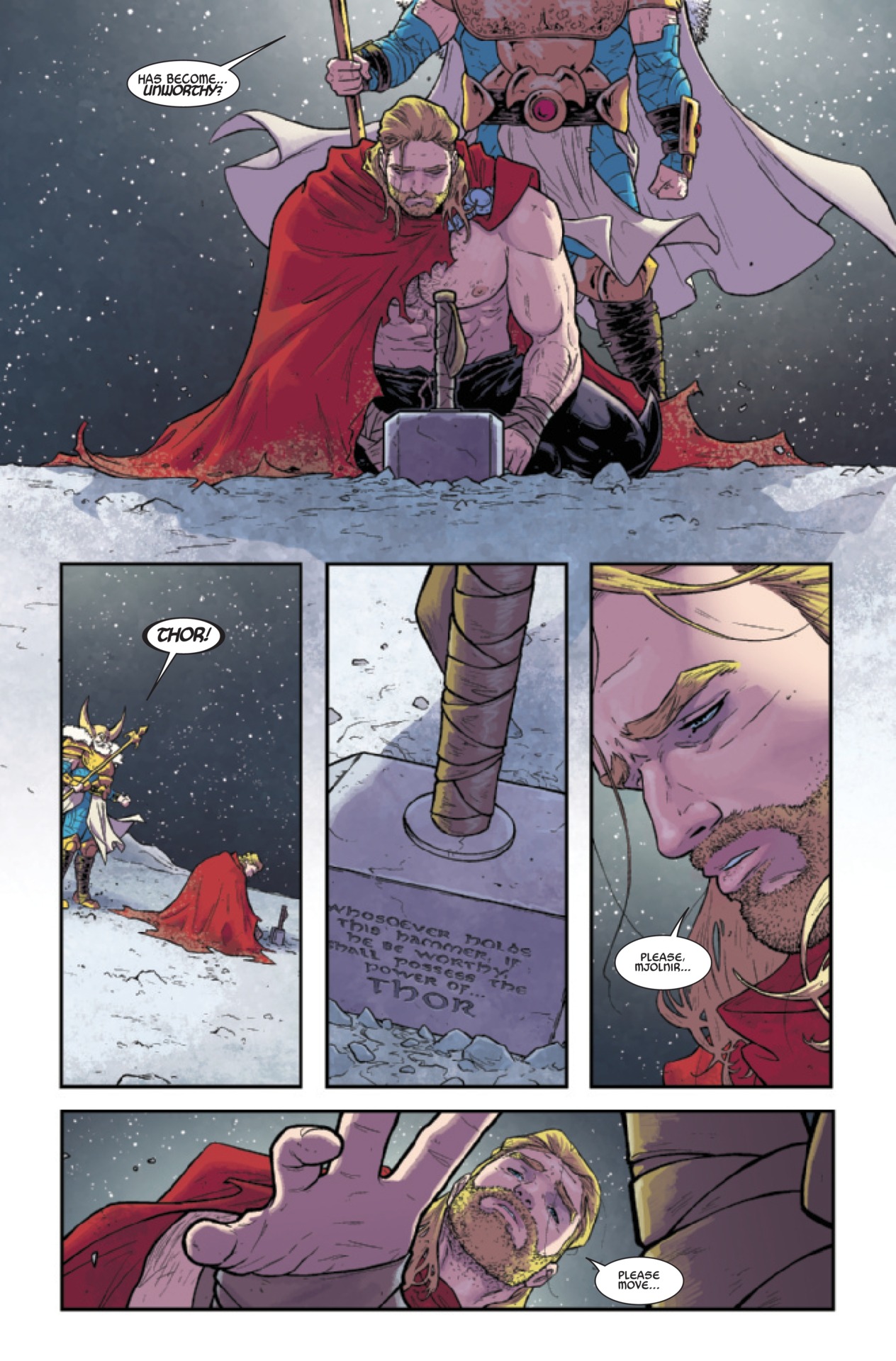 Back on Midgard, the dark elf Malekith the Accursed (in his court-jester costume as opposed to his leather mask and Middle-Earthen look as seen in “Thor: The Dark World”) tortures the staff of Roxxon until one of them gives up information on an recently found (but unidentified) relic. The hammer-less former Thor (Odinson?) comes as the calvary on a giant war goat, and his resulting battle with Malekith and the Frost Giants is quite disarming.

I kill myself sometimes, I really do.

Meanwhile on the Moon, an un-shown woman picks up Mjolnir and becomes Thor. If you thought we’d learn her pre-Thor identity in this issue (and I sure did), you’ll be somewhat disappointed. I’m certain we’ll learn soon enough. Aaron leads us to think throughout the issue that it’s a certain individual, (and boy, I think that would be a bold and interesting take), but it’s possible that he could be throwing a red herring out there. There must always be a Thor (I like when there’s two or three myself), and this new Thor: the Goddess of Thunder is now the 2014 model. 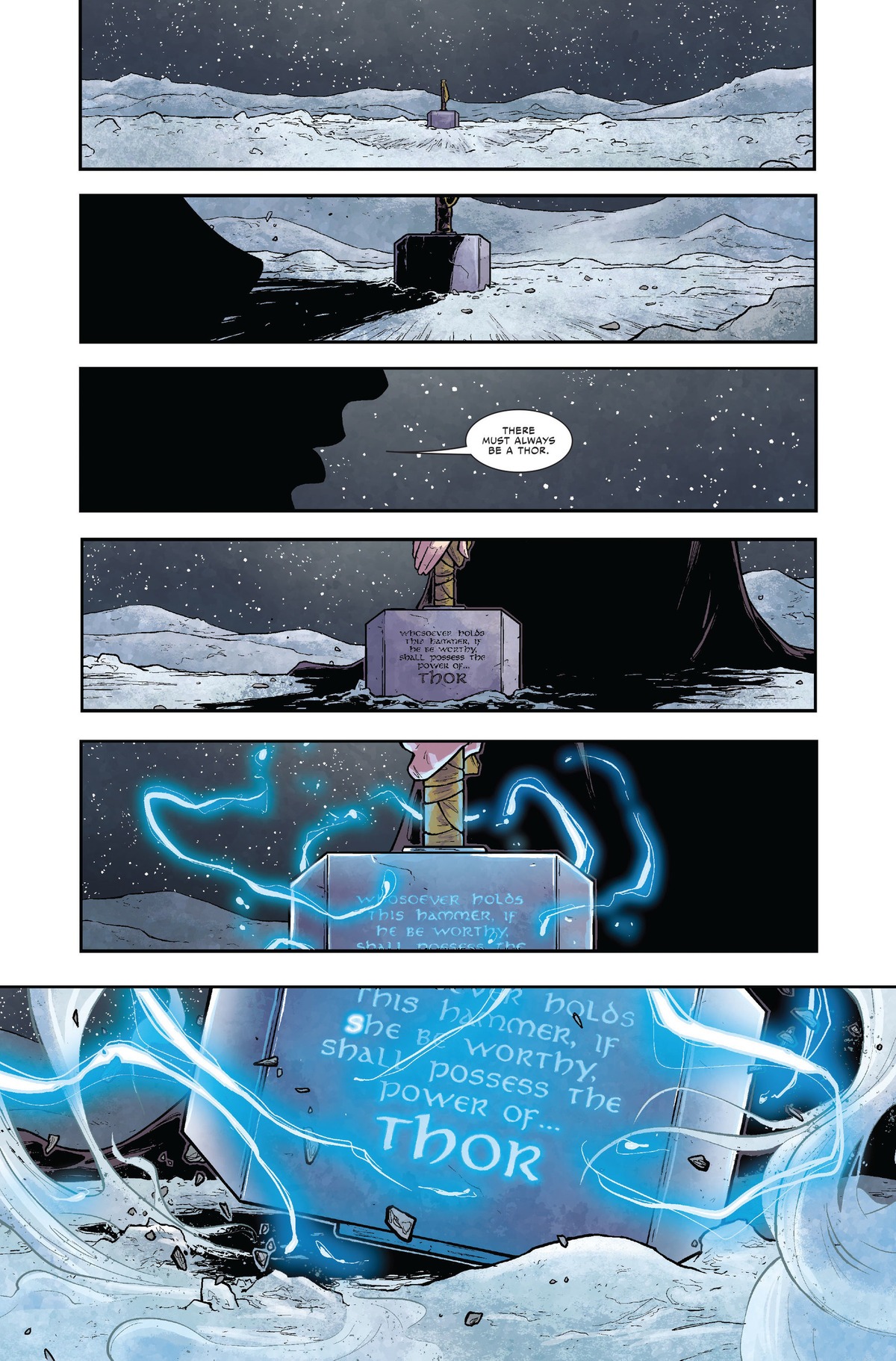 Quality wise, this issue could just as well be “Thor: God of Thunder” #26, as it’s just as well-written as that previous series-which was also by Aaron (with art mostly by Essad Ribic). It’s easily followed, and there’s enough exposition that a new reader could certainly pick it up and get it right away. It’s a dense read that gets better and deeper the second time you go through it.

Jason Aaron is just so good right now. I just finished the first four issues of his “Southern Bastards” (that trade comes out today, look for a review soon) and his upcoming book “Men of Wrath” is arriving very soon. He’s also signed on for Marvel’s new “Star Wars” series—I can’t wait for that either.

Dauterman’s art is excellent as well. From the anguish on Thor’s face to Malekith’s Joker-esque glee, Dauterman’s expressions are outstanding, and his panel layout-especially in the battle scenes-add greatly to the story being told. I don’t think he drew the figure of Thor straining to pick up Mjolnir on the credits page, but I liked that too.

So, we have a new Thor, and I’m all-in. I think you should check this story out and decide for yourself. I trust Jason Aaron, and you should as well.

Check out that new inscription on Mjolnir, yo.