Hello and welcome to “Weber Has Issues”, where we dive into new comics that require no previous knowledge of what has happened before….you know, “jumping-on” points. For the second week in a row, we step into the way-back machine, only instead of going to the groovy ‘70s, we’re going all the way back to the days of the second World War.

Will Eisner’s comic “The Spirit”, which ran in newspapers from 1940-1952, has long been revered as a high-water mark for Golden Age comics that integrated new approaches to graphic storytelling with compelling characters and even had some sex appeal. The comic strip was very much of its time, however, and also featured some unfortunate racial stereotypes. Even so, the most prestigious comic awards given out are named after Will Eisner. Too bad Frank Miller lost his marbles and made an awful film about “The Spirit”, which was a truly wretched project that has tainted the character ever since. DC now owns the rights to “The Spirit” and writer/artist Darwyn Cooke (Justice League: The New Frontier) jump-started a Spirit series in 2008 that updated the character and shed the unfortunate racial periphery associated with the persona.

Dave Stevens’ “The Rocketeer”, though set in the pre-war era, was created in 1982 and ran sporadically until 1995. Most people know about the character due to the fine film by Disney in 1991. Stevens combined his love for weekly adventure serials with the pin-up art of the time (Bettie Page) for a unique, iconic comic. There haven’t been a ton of Rocketeer comics published over the years (Stevens died in 2008), but recently IDW has been running with the property, putting out anthologies and mini-series since 2011, and top-notch creators have been jumping on board to work on Stevens’ creation. 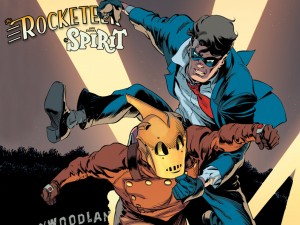 “The Rocketeer & The Spirit: Pulp Friction #1of 4(cooperatively put out by IDW and DC, $3.99) is written by Mark Waid and drawn by Paul Smith. The story begins with a debate in fictitious East coast burg over who will control the emerging television industry. The opposing alderman ends up drowned in the Pacific Ocean the next morning, and is found by the Rocketeer’s main squeeze, Betty. The alderman just happened to be a close friend of the Spirit’s police contact, which gets the pieces moving toward one another. Of course the heroes fight each other at first, before things become clear, introductions are made, and the two team up to solve the mystery.

I liked (but did not love) this funny book. There was some standard but necessary set-up to get the characters together (fine, I suppose; they ‘exist’ during the same era, so that’s plausible). There was clear characterization and a title page that cleanly explained who the protagonists are and what they can do, which makes a comic like this pretty user friendly (and it’s what this column is all about). There was plenty of legitimately funny dialogue (Mark Waid has always been a good scripter going back to “The Flash” in the early ‘90s). The art by Smith (who was awesome on DC’s “The Golden Age” as well as a fine “X-Men” run back in the day) is somewhere in the middle for me; his figures and faces (as well as the action) are very nicely done, but there are little to no backgrounds to be found. I guess that’s par for the course as far as comic art goes these days. I guess I’m spoiled by Dave Stevens’ original Rocketeer stories (seriously: SEEK THEM OUT).  There are some absolutely beautiful pin-up girls drawn, however, and this is clearly in the tradition of the Stevens’ Rocketeer (as well as being reminiscent of the luminous Jennifer Connelly in the Rocketeer film).  YOWZA. 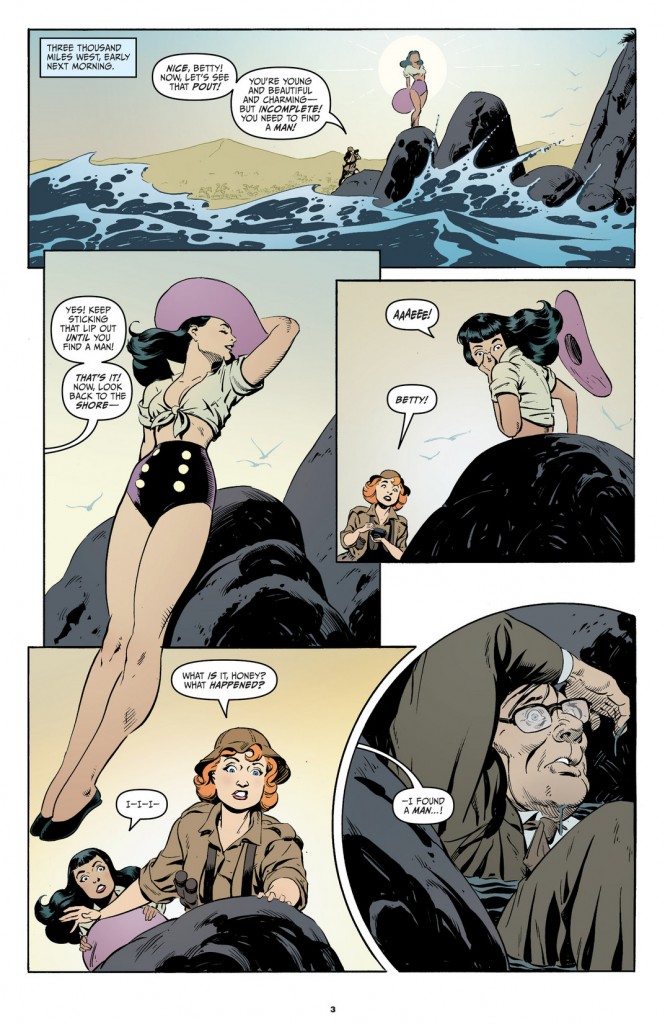 Overall, this is a promising beginning to a fun story, and though I’ll be “waiting for the trade” to read the rest of it, this might just be up your alley. Rocketeer/Spirit is two great tastes that taste good together, and we’ll see if that initial promise carries through to the end of this mini-series.

Other new comics I purchased this week: Justice League Dark #22 (too confusing, a misstep for the “Trinity War” crossover), Hawkeye Annual #1 (a Kate solo tale), Lazarus #2 (still very cool), Aquaman #22 (I think Geoff Johns is phoning it in at this point).

I recommend supporting your local comic book brick-and-mortar store (visit mine at facebook.com/pages/A-1-Comics-Inc) or by using Comicology’s nifty comic-reading app. To find a comic shop near you, call 1-888-COMIC BOOK.