Happy Tuesday and welcome to another installment of Weber Has Issues, the sometimes-weekly column where I take a look at brand new comics that either are premiere issues or are appropriate “jumping on” points that start new story-lines. The goal is the same, to highlight comics that anyone can pick up and get into without any prior knowledge or purchase. This week week we’re looking at a couple of new number one issues from Vertigo that meet that criteria-so let’s jump in and check ’em out. 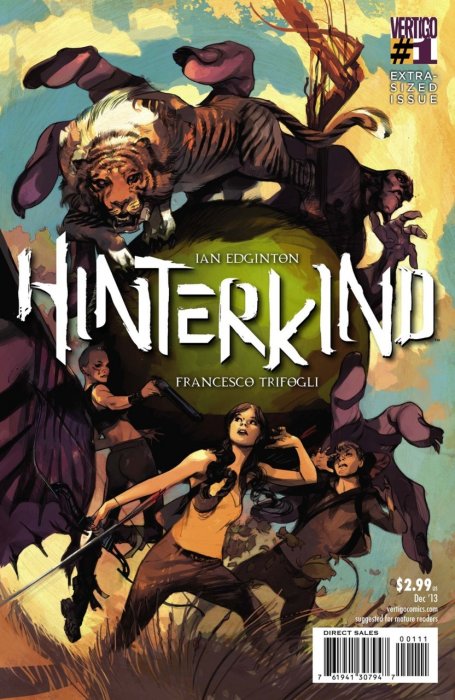 Hinterkind #1 (Vertigo, $2.99, written by Ian Edginton and drawn by Francesco Trifogli) is a neat little book that supposes society and technology have broken down, the human population has been greatly reduced, and the world has become a bit more wild. The main characters, Prosper and Angus are best friends (though, as you’ll find out, NOT bound to fall in love) who live in a future New York City that’s been overrun with foliage. Wild animals populate the parks and streets, and the two youths hunt game for fun and survival. There is a network of communication between villages of people, and Prosper’s father and some specialists task themselves with going upstate to Albany and finding out what’s become of the outpost there. We learn that very, very bad things await the group in Albany, and Prosper and Angus get into immediate trouble from an unexpected enemy. 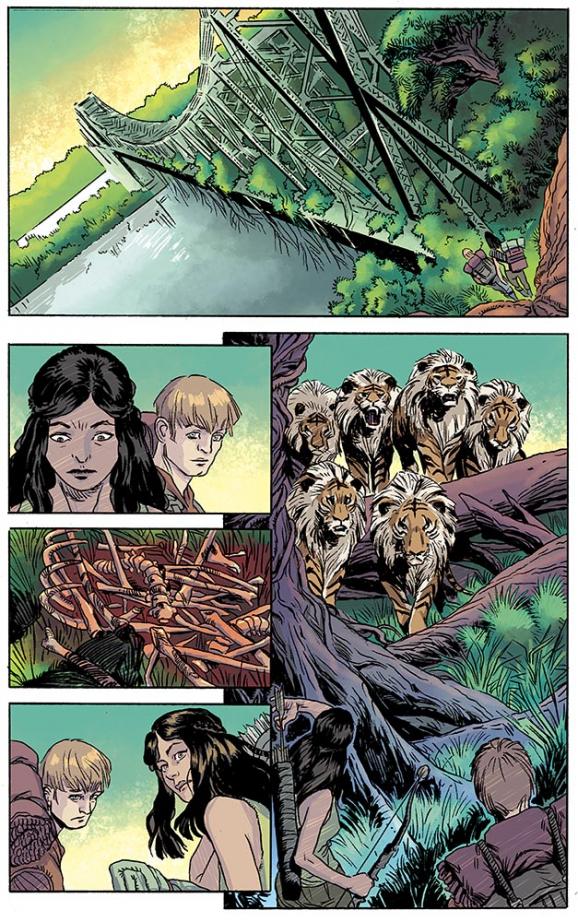 There are hints dropped early on (not to mention the cover) that there are other things happening to this world–and halfway through the book, you see we’re not in Kansas anymore–or more likely, Kansas has some strange new inhabitants. The main characters are likable and fun, and the story is certainly interesting.

I liked this book, especially after re-reading, and can recommend it for people who want something new and different. It’s evocative of some of Neil Gaiman’s comic work and reminds me (in a good way) of Brian K. Vaughan’s “Y the Last Man”. The art is really nice too (especially on the animals), and the images of an overrun with plant life New York City really stay with you.  I’m keeping an eye on “Hinterkind”.

Who would like this: Fans of NBC’s “Revolution”, people who like survivor tales like “The Walking Dead” (though this is NOT that dark), teenagers who like “The Hunger Games”, and fans of Guillermo Del Toro’s fantasy films (“Pan’s Labyrinth” specifically). 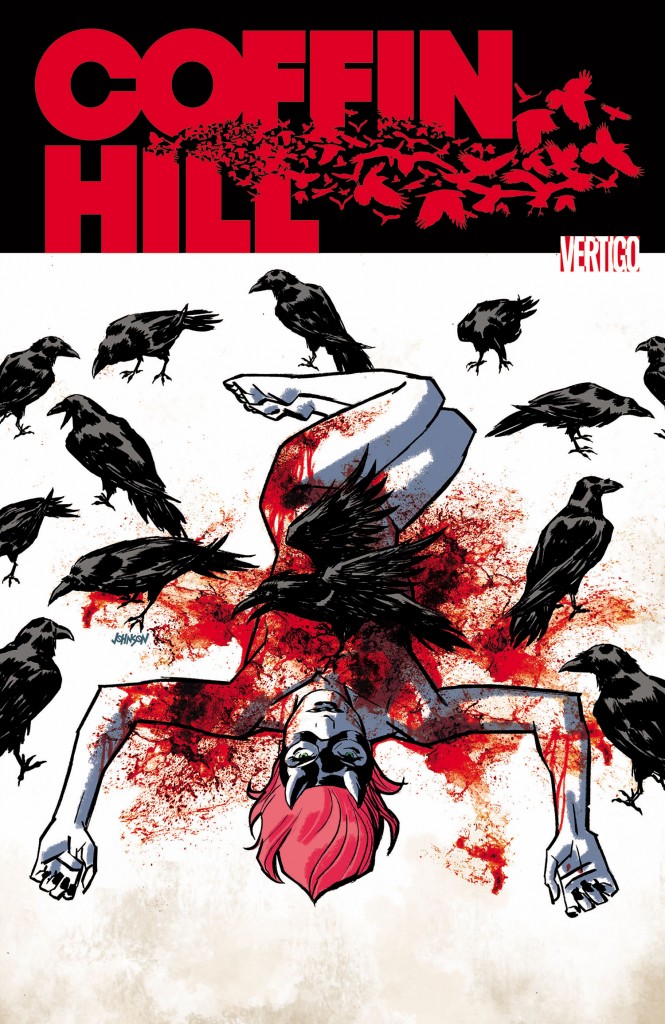 I also picked up Coffin Hill #1 (Vertigo, $2.99, written by Caitlyn Kittredge with art by Inaki Miranda), which tells the story of a very interesting police officer named Eve Coffin. Eve is from a venerable New England family that has witchcraft in their history. Eve and her police department are celebrating her unlikely capture (a random occurrence) of a serial killer nicknamed “The Ice Fisher “, but when she returns home, tragedy strikes. While Eve fights for her life in the ER, we flash back 10 years to Eve’s rebellious youth. The well-to-do Coffin family throws a societal gala in their Addams Family-esque mansion, and this provides Eve the opportunity to steal a family heirloom and then to loudly embarrass her parents in front of their socialite friends.

Eve and her punk friends go into the forest and play with magic. We don’t see exactly what happens next, but some of the teens end up missing and Eve is a bloody and unconscious mess. We then return to the present day, where a now-recovered Eve is discharged from the hospital. She returns to live in her now-dilapidated family home.

I get the feeling this book will continue the flashback story device, and that will probably keep me interested for awhile. Like Hinterkind, this book has a strong female protagonist that is sorely needed in comics these days. The art is appropriately stark, and the colors are well-used to tell the story in the past and present. The book’s themes of family, crime and witchcraft are uniquely presented, and this dense story will take some time to unfold. I recommend this, but it’s sure not for everybody. Once I re-read the book, I picked up on more of the depth that Kittredge has layered the story with.  I’m somewhat worried that the book will try too hard to cater to teens while alienating older readers (my main problem with the similarly-themed “House of Secrets” from the ’90s by Steven T. Seagle), but maybe we’re supposed to find the teenage characters obnoxious and flawed.  I hope that’s the case, because they certainly are obnoxious as heck in this story. 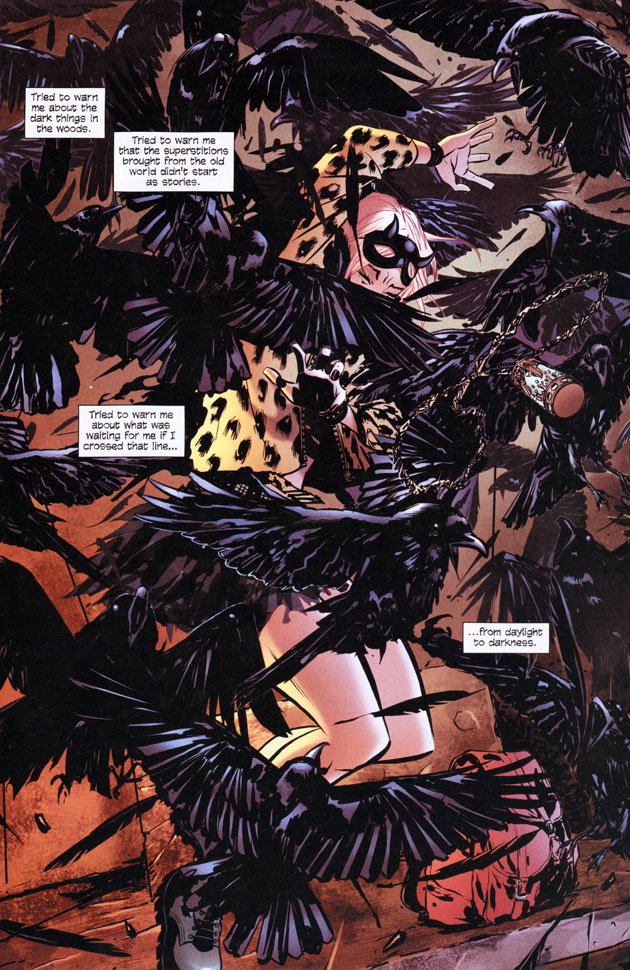 I, for one, am optimistically looking forward to seeing just where “Coffin Hill” goes and if it stays as compelling as this first issue.  Dark stuff to be sure, but there’s something here to keep an eye on.

Who would like this: Watchers of the NBC show “Grimm”, People who miss “Hellblazer” and fellow survivors of the ’90s who love crazy-eyed Fairuza Balk in “The Craft”.