Hello and welcome to “Weber Has Issues”, where we dive into new comics that require no previous knowledge of what has happened before….and where we LOVE comics like this one.

With all of the Comic-con coverage we’re doing (and with the summertime flood of comic-related films that we’re covering), we here at The Place to be Nation need to open up the vintage vault equivalent of a comic and be reminded of a simpler (but not always better) time…

I have never liked Deadpool; he just seemed so contrived and immature. Most of the individuals I have known who enjoyed Deadpool into their twenties were knuckle-dragging GameStop employees, and I’d never even considered reading a Deadpool comic until now. I know some quality creators have worked on his title in the past, but only since one of my favorite stand-up comedians started writing Deadpool’s monthly adventures have I started buying his book. A long-term Deadpool story just ended, so perhaps this month’s issue (actually this book is on a two issue per-month pace) will be a good jumping-on point. Let’s find out together. (Opens comic and is transported to 1977). 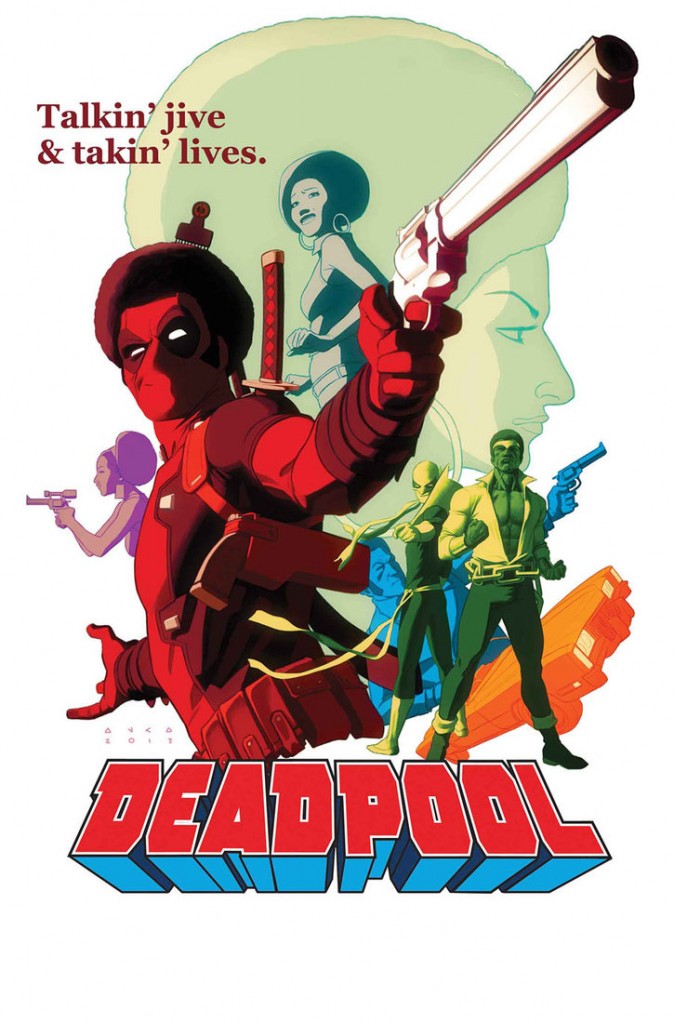 Aw, man, Deadpool #13 ($2.99, Marvel Comics) written by Gerry Duggan and Brian Posehn (yes, THAT Brian Posehn) and illustrated by Scott Koblish is DY-NO-MITE, amigo! This comic is straight fantastic, now can you dig that? Deadpool is just the coolest cat on the block, and this dude is funky! Say what, ace? Time to ditch the disco drag, blood? Sweet Christmas! All right cuz, I can DIG that jive.

This is a “lost tale” of Deadpool from the ‘70s, as we all know that Deadpool was created in 1991 by your favorite creator and mine, Mr. Robert Liefeld, esq. The conceit of the issue is that Deadpool has been around that long, and if you, like me, can remember that it’s only funny books and that ignoring continuity for the sake of something different can be a blast if done right, then this comic is for you.

In this retro-themed flashback issue, Deadpool (about whom all you really need to know about is that he’s got a healing factor like Wolverine, likes to kill people, and who was played very poorly by Ryan Reynolds-probably not his fault- in the film “X-Men Origins: Wolverine”) teams up with ‘70s icons Power Man and Iron Fist in a “Starsky and Hutch”-styled adventure. The puns and quips fly with aplomb as “the merc with a mouth” collaborates with the “Heroes for Hire” and the boys try to clean up the scary place that was New York City in the seventies.  Chaos and…..romance ensue, and there’s lots of fist-flying action. 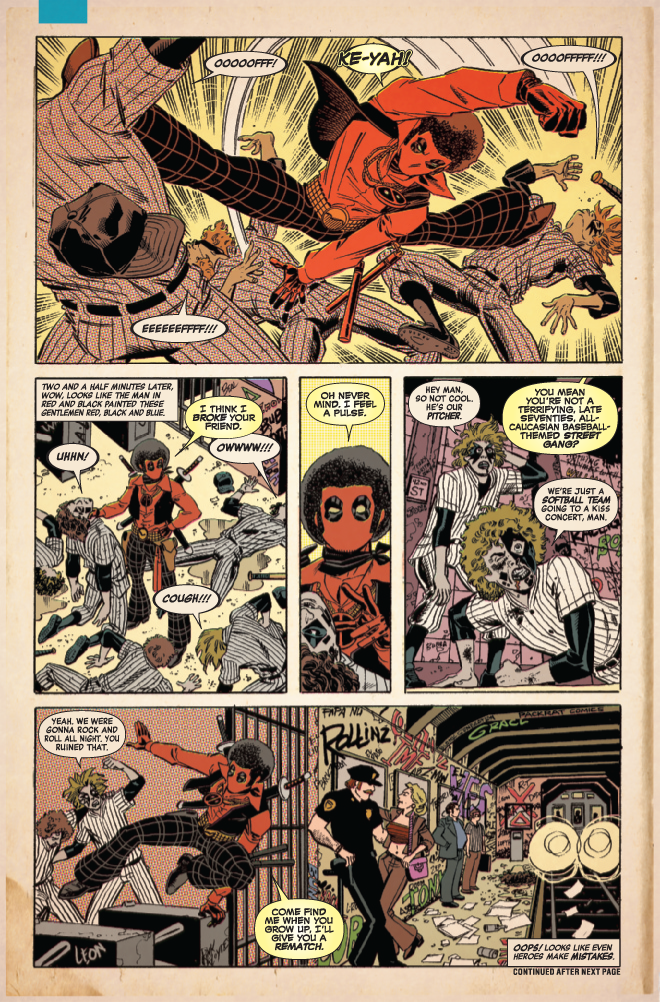 This is easily the funniest comic series on the shelves, and both the previous collections (the second hardcover is out soon) are must-owns (or, you can track down the individual issues like I did, they’re not too expensive yet). Clearly the credit has to go to Posehn, who is not everyone’s cup of stand-up tea (check him out via Netflix on both his special “The Fartist” and on the various “Comedians of Comedy” specials with Patton Oswalt, Maria Bamford and Zach Galifianakis), but who is a tremendous TV writer and clearly a creative dude. There are MANY references to ‘70s Marvel books and characters, but you don’t need to have read anything before this book to enjoy it. The dialogue in this comic book is hilarious, and the story even pays tribute to the cult film “The Warriors”.

“Warriors, come out and play….” come ON. You were thinking it.

This is the funniest comic series since “Ambush Bug”, and from me that is VERY high praise indeed.

Koblish’s workmanlike art would fit in the 1970’s Marvel world as well and would look fine on the racks next to artists like Sal Buscema and Al Milgrom. The action scenes are poppin’, and Koblish draws a swell Luke Cage. His art suits the story, and adds to the humor as well (there’s an um… intimate moment/love scene that made me laugh hysterically).

Do yourself a favor and buy this comic, turkey!

WHO WOULD LIKE THIS: People who like old-school Marvel like “Power Man and Iron Fist” and “Master of Kung-Fu”, people who appreciate a fine glass of Courvoisier such as the Ladies’ Man Mr. Leon Phelps, fans of retro comedies such as “Starsky and Hutch”, fans of Tarantino’s films “Jackie Brown”, “Pulp Fiction” and “Kill Bill”, and people who miss the “Bwah-ha-ha” era “Justice League”.

Other new comics I purchased this week: Wonder Woman #22, Justice League of America #6 (more Trinity War exposition, very appreciated), All-New X-Men #14 (Jean Grey and Mastermind meet again), Animal Man #22, Fables #131 (which adds the Knights of the Round Table to the Fables mythos), 100 Bullets: Brother Lono #2, and Legion of Super-Heroes #22 (stick a fork in it, it’s done.)

I recommend supporting your local comic book brick-and-mortar store (visit mine at A-1comics.com) or by using Comicology’s nifty comic-reading app. To find a comic shop near you, call 1-888-COMIC BOOK.