Happy Tuesday and welcome to “Weber Has Issues”, where we boldly dive into new comics that one can just pick up and read without worrying about any previous backstory or knowledge of the characters or plot-lines within. Thankfully, DC/Vertigo is on a major roll right now and is putting out lots of brand-new books that fit this description.

There’s a rich tradition of science fiction in comics, but they’ve been mostly licensed properties. A few years ago, DC put out Helix comics, a line of sci-fi based series to complement its fantasy imprint, Vertigo. Helix was NOT very commercially successful, despite having several very good titles (notably Garth Ennis’ “Bloody Mary” and Warren Ellis’ “Transmetropolitan”), and was discontinued/folded into Vertigo in 1998. Vertigo’s base has now expanded from fantasy to superheroes, from war comics to horror; a creator-owned science-fiction series seems right at home in Vertigo’s creative landscape. It does seem that in this age of Hollywood raiding comics for ideas (ANY book of ANY genre is fair game) that Vertigo is stockpiling creator-owned creative properties ripe for movie/TV development. I can easily imagine “Collider” as a television series on Fox, Sci-Fi (is it really “SyFy” now?), or even the USA Network.

Collider #1(Vertigo Comics, $2.99) written by Simon Oliver and illustrated by Robbi Rodriguez, is quite literally a science-fiction comic; that is, it’s about what happens when the science of physics is changed on Earth. Physics. (Cue Jesse Pinkman yelling, “Yeah! Physics!”) It’s a comic about gravity (not the metaphor that crappy bands like Switchfoot write songs about, but the physical force of attraction between two bodies). This book takes place in a world where there have been strange happenings going on for some time and where the Feds have created a public agency set up to deal with any weirdness dealing with the laws of nature on American soil. This has been going on for some time, enough that any crazy physics phenomena are no longer headline news.

Agent Adam Hardy is our main character here; he’s part of the government team (the “Federal Bureau of Physics” or “FBP” from here out) who get dispatched to investigate anomalies; his late father was a groundbreaking scientist who proved early on that there was something up with Earth’s physical state. Hardy is a good little bad boy; he has a bad reputation at work with his superiors but is something of a boy scout deep down.

Hardy and his team investigate a gravitational failure at a public high school and attempt to get things back down to Earth (I kill me sometimes). There’s an amusing sequence where the students float weightlessly before the FBP get them down. The Bureau brings in a massive machine that repairs gravity (ok, sure). Something goes very wrong, and Hardy and the FBP have to think fast to shut down the breach without leaving everyone up in the air (last one, I promise). It’s easy to imagine this series being a successful hybrid sci-fi procedural, and there are enough mysteries and compelling characters to warrant coming back for the next issue. 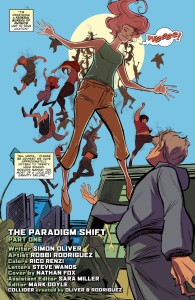 This series has a ton of potential; I enjoyed this first issue quite a bit. I was reminded of “Planetary”, “Fringe” and “The X-Files”. Oliver, best known for his Vertigo series “The Exterminators”, creates a believable, well thought-out world (he definitely nails the inefficiency of federal-run ANYTHING) and Rodriguez (reminding me very much of “The Wake’s” Sean Murphy) tells the story clearly and does a nice job with the tech. Also of note is Rico Renzi, who colored the book. Often I only really notice coloring when it hurts a story; Renzi’s palate enhances Rodriguez’s art tremendously.

I’m certainly on-board. Vertigo has yet another solid new comic to jump-start your imagination every month. This was a pretty good debut issue, filled with humor, mystery and science fact/fiction.

WHO WOULD LIKE THIS: Fans of “Fringe” or the “X-Files”, readers of Image’s “Chew”, readers of books like “Ready Player One”, physicists, and people who watch “Mythbusters”.
Other new comics I purchased this week: Animal Man Annual #2, Batman Annual #2, The Wake #3.

I recommend supporting your local comic book brick-and-mortar store (visit mine at facebook.com/pages/A-1-Comics-Inc/143922524867) or by using Comicology’s nifty comic-reading app. To find a comic shop near you, call 1-888-COMIC BOOK.