A super Tuesday to you and here’s another “Weber Has Issues”, where we check out “entry-level” comic books. We had a busy comic week, with big issues of “Daredevil” , “Wonder Woman” and “Superman Unchained”, but the most new-reader friendly book this week came from our friends at IDW and featured new versions of a rock-and-roll band who are larger-than-life.

KISS Kids #1 of 4, (IDW Publishing, $3.99) with story by Chris Ryall & Tom Waltz and art by Jose Holder is very, very silly indeed. We meet the band as though they’re fully-realized in their costumes and make-up somewhere between ages 6-10. They’re loud, rude, crude and brash, but that’s kind of the point. This issue features NINE mini (and one-page micro) stories, all featuring puns based on classic KISS songs. Some examples are “Dressed to School” (the KISS kids go the local mega mart for fall clothes) and “Carnival of Soles” (junior Gene Simmons’ boots are ALIVE). You get the gist, it’s basically a Saturday morning cartoon show in comic form.
Here’s the press release, which sums up just how off-the-wall this venture is:

Presenting the adventures of Li’l Demon, Starchild, Catkid, and Spacey… the KISS Kids gang! This rockin’ new comic offers adventures for all ages (and many in-jokes and familiar characters for the KISS faithful, too). No blood or fire here, just laughs and fun tales of the little costumed maniacs and the crazy town in which they live.

Ah. This is just like “Muppet Babies” all those years ago, pint-sized reductions of characters we know and love who retain their general look and characteristics but are now kids. It’s a formula that’s been repeated with, among others, “Superhero Squad” (kid versions of Marvel’s universe of characters), and several versions of the Teen Titans (“Tiny Titans” and “Teen Titans, Go!”) and is even spawning an “Itty Bitty Hellboy” comic coming out soon. Well, whatever works to get kids reading comics is fine by me.

I put “KISS Kids” in my six-year-old son’s hands and let him read it. My son thought that the band were “weird clowns” who were “kind of strange”.

There you have it. If you’re into “weird clowns” who are “kind of strange”, then “KISS Kids” is for you.

He read the comic all the way through, and he asked questions about the characters, so I guess that’s a good thing. He is a frequent comic reader though (how could he not be), and this fits in with some of the books he likes (“Tiny Titans” and the animated Teenage Mutant Ninja Turtles). I’m not buying him any KISS records just yet, but I’ll keep an eye on him.

IDW specialize in licensed comics (Star Trek, Transformers, Ghostbusters, Doctor WHO) and “KISS Kids” is a nice example of a licensed property that does exactly what its supposed to do: entertain the target and not to mis-represent the property. I think the book succeeds in its mission. The characters all have their own particular little quirks (Starchild/Paul Stanley is the leader and usually the “straight” man for the jokes, Li’l Demon/Gene Simmons is basically a cross between Wolverine and the Muppets’ Animal (or DC’s Lobo), Spacey/Ace Frehley is an easily-distracted poster child for ADHD, and Catkid/Peter Criss is a sad homeless guy who sings “Beth” for spare change…..wait, I became confused and referred to the real-life Peter Criss).

The book is fine for what it is, even though it’s pretty much written only for kids and for KISS fans. There are actual jokes and puns that kids should like, and the characters are consistently written and drawn. This is, to paraphrase my friend Scott Keith, a “perfectly acceptable kids’ comic”.

Personally, I’d actually be more interested in a comic based on the real-life adventures of Paul Stanley and Gene Simmons and their mutant ability to harvest every possible dollar from being in a mediocre band that hasn’t had a mainstream hit since 1983. These two financial wizards are the highest evolutionary examples of the art of pure capitalism, and they are truly amazing businessmen. They are the real comic icons whose adventures I’d gladly read every month.

In descending order, here’s my completely subjective list of influential all-ages books. Some are superhero adaptations for young ‘uns, and some are original properties. 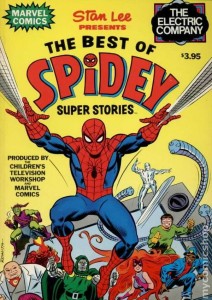 Once upon a time, there was an educational show from the Children’s Television Workshop on PBS entitled “The Electric Company”, which featured the adventures of a mute live-action Spider-Man. Marvel did a tie-in comic, written specifically for kids, that featured the Web-Head battling both the villains of the Marvel Universe and poor grammar. It’s still fun for grown-ups, perhaps ironically. 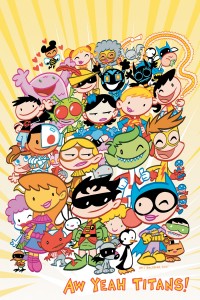 This my son’s absolute favorite comic series (now cancelled, but the trades are out there). This may be the funniest children’s comic ever written, and even grown-up DC fans can appreciate the stories. Art Baltazar’s art style is very recognizable, and he’s also done kiddie versions of the Superman family of characters and now Itty Bitty Hellboy (probably not letting my son read that….”Dad, who’s Rasputin, and what did he to deserve to be in Hell?”) 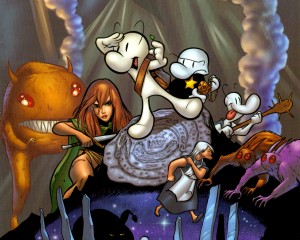 Jeff Smith’s legendary story is terrific for both kids and adults, and the omnibus should be on every serious comic reader’s shelf. Funny, action-packed and touching, Bone is an all-time classic that we here at PTBN Comics will eventually take an in-depth look at in a future column. 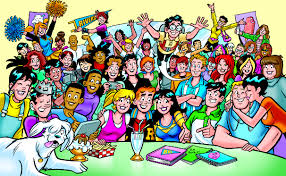 Who hasn’t spent time with Archie, Jughead and the gang? Riverdale High’s finest have endured for generations, and are still relatable. The rich brunette or the heart-of-gold blonde has remained a viable plot for decades! Archie comics have even become somewhat experimental as of late, with alternate timelines and off-beat crossovers (the Punisher?)

Batman: The Animated Series, which was certainly the finest cartoon representation of superheroes ever created, also led to the best comic ever made for kids. This series later spawned animated comic book versions of Superman, the Justice League and the entire DC Universe itself! Bruce Timm’s designs (drawn mostly in the comic by Mike Parobeck) were deceptively simplistic, and Paul Dini’s stories engrossed readers across the board. The “Mad Love” special, which introduced Harley Quinn to comics is still legendary to this day. I’m constantly trying to complete my collection of this awesome run of hard-to-find comics.

I recommend buying comic in person whenever possible and supporting your local comic book brick-and-mortar store (visit my two favorite stores at https://facebook.com/pages/A-1-Comics-Inc/143922524867 and https://facebook.com/pages/River-City-Comics-and-Games/270845306275971) or by using Comicology’s nifty comic-reading app. To find a comic shop near you, call 1-888-COMIC BOOK.